Ken and the kids used to eat baked potatoes with butter, kimchi and sour cream when I wasn’t looking. What if it kimchi, potatoes and sugar snap peas made a summer salad?

The story of these Easy Pecan Tiles begins in a Paris museum and ends a couple of hours after Jody dances atop a bar in a Boston restaurant (a groundbreaker for both of us).  First Paris, then the recipe, then the bar.

Chicken Wings with Celery and Bottarga is not a traditional Sardinian delicacy.  Bottarga and celery, yes; chicken wings, ah no.  This dish is, in fact, the love child of two different desires, Jody’s yearning for wings and my own wish to do another Sardinian recipe before I throw in the towel, tuck my shorts away in my Camp Grenada footlocker.  Sardinian wings were the result, and just in time.  A couple of days of freezing rain have stripped more than a few trees in our neighborhood of their autumn raiment; limbs are skeletal,not festive and the uncleared sidewalks resemble the killing floor in a chlorophyll slaughterhouse.  And it got cold, provoking someone in our house to violated the First Law of Yankee-dom: No one shall touch the thermostat until November 1st.  The one good thing about cold weather is that it means a new harvest of bottarga will be soon at hand.  And with this wings recipe in hand, when this season’s bottarga becomes available in mid-to-late November or early December, you’ll be primed.  While everyone else is still fumbling with their laces you’ll be burning down the track, chicken wings and celery bundled under your arm.  Nyah-nyah-nuh-nyah-yah.  And how did we make this recipe if bottarga won’t be available for another month?  Easy, we whittled down our own two-year-old chunk of umami ambergris that has been cooling its eggs in our fridge.  No lie – I ordered it online at the end of 2012.  When was the last time you consumed something from your fridge that was two years old?  Still as potently delicious as the day we bought it.  With chicken wings and celery it was a ménage à trois made in heaven.  After Jody left at the conclusion of our cooking and shooting session, I was the only one home, not counting the Lagunitas IPA’s in the fridge.  The next morning there were no wings to be found.  Draw your own conclusions.

Fat.  Let’s not beat around the bush, shall we?  Fat’s probably the best place to begin a discussion of Chicken Rillettes with Preserved Lemon and Summer Savory.  Au debut, as the French say, in the beginning, rillettes meant one thing – pork.  Or rather, pork and fat.  Rillettes was pork that had been salted, cooked slowly in pork fat, shredded, then preserved in the same fat, and served at room temperature, usually spread on toast.  Rillettes* are now found all over France, and while pork is still popular, in the Southwest, the Midi-Pyrenees, extending down to the Spanish border, the technique is more often seen with duck or rabbit.  Today rillettes of salmon, tuna or other fatty fish, or even mushrooms are not uncommon on pricey menus.  It’s hard to argue with that–what doesn’t taste good when cooked slowly in fat and salt?

Who doesn’t love sweet potatoes?  Culinary gravity inexorably pulls them toward brown sugar or molasses or something candied, even with bacon (candied bacon).  But don’t do it, at least not this time.  I never encountered a sweet potato during my year abroad in the Swiss canton of Fribourg, a stone’s throw from the town of Gruyères (town, plural: cheese, singular), but I can guarantee that that if there were ever a culinary match made in heaven it’s sweet potato and that most hazelnut and butter flavored of all cheeses, aged Gruyère.  Some cheeses should never be melted (sorry, brie en croute is ghastly) but Gruyère is just the opposite.  Quiche, the poster child of boring French food from the ’70’s, is redeemed by the addition of aged Gruyère.  Fondue without Gruyère is but a pale revenant of the real deal.  Gruyère is expensive (around $20/lb.) but the recipe only calls for a cup and half of the stuff, grated, about 3 ounces.  Unfortunately, I only found out about the Gruyère after the ingredients photograph had been taken.  Jody announced that she’d added Gruyère–I couldn’t even photograph it being stirred into the bowl.  I growled and stomped around.  I should have waited until I tasted the finished pie.  Gruyère and sweet potatoes rule.

Ceci n’est pas une quiche.  It’s a Swiss Chard Tart with Gruyère and Anchovies.  Quiche sounds so seventies, like the ubiquitous anonymous “white wine” that came into vogue as an alternative to cocktails during the same

culinary epoch.  Boring.  White.  Food.  But a tart, a tart can play.  Sweet or savory, rich or light, it has no rules beyond the obligatory crust, and inclination to use whatever looks good in the market that day.  And what looked good to us was the Swiss chard. So, yes, this is a savory custard tart, but it’s really about the chard. Oh, and the anchovies. The tart doesn’t taste like anchovies–it tastes like chard, with cream and cheese, and something salty and elusively delicious in the background. 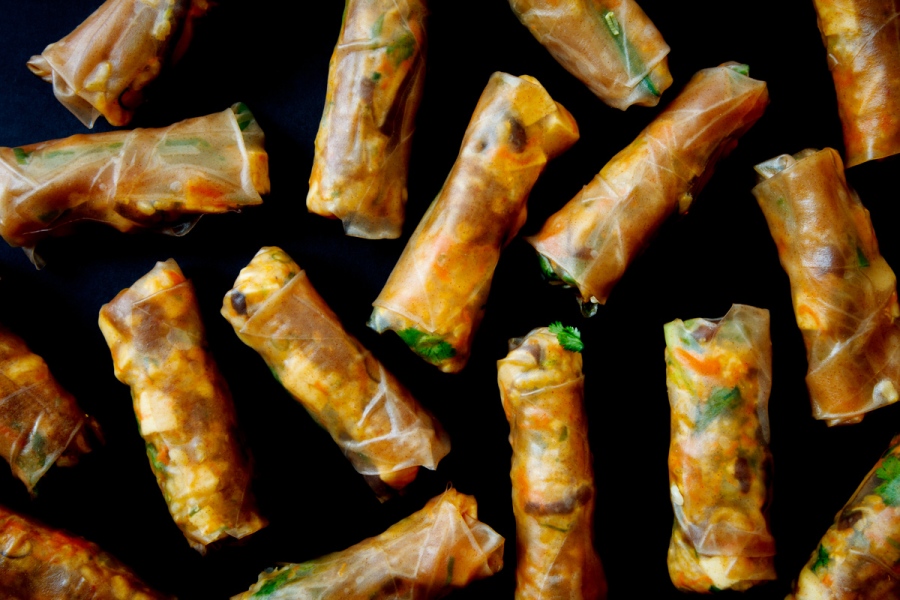 There comes a time when every cyclist reaches into a jersey back pocket, extracts a pro-biotic hyper-nutrient choco-green exfoliant chia protein bar and instead of ripping away the wrapping like the savage carbo-craving road shark she is, she freezes.  Tongue, stomach and heart revolt.  A chilly voice in her head announces the rebel demands: We don’t want to eat an energy bar.  Ever.  Again.  Last year, reflecting on the long PanMass Challenge ride she’d just finished, Jody said to me, “I am sick of f_______ energy bars!  I can’t stand it!  Next year I’m going to make my own.”  Fortunately, she reconsidered.  And that’s why you’re being treated to Bicycling Spring Rolls this week. 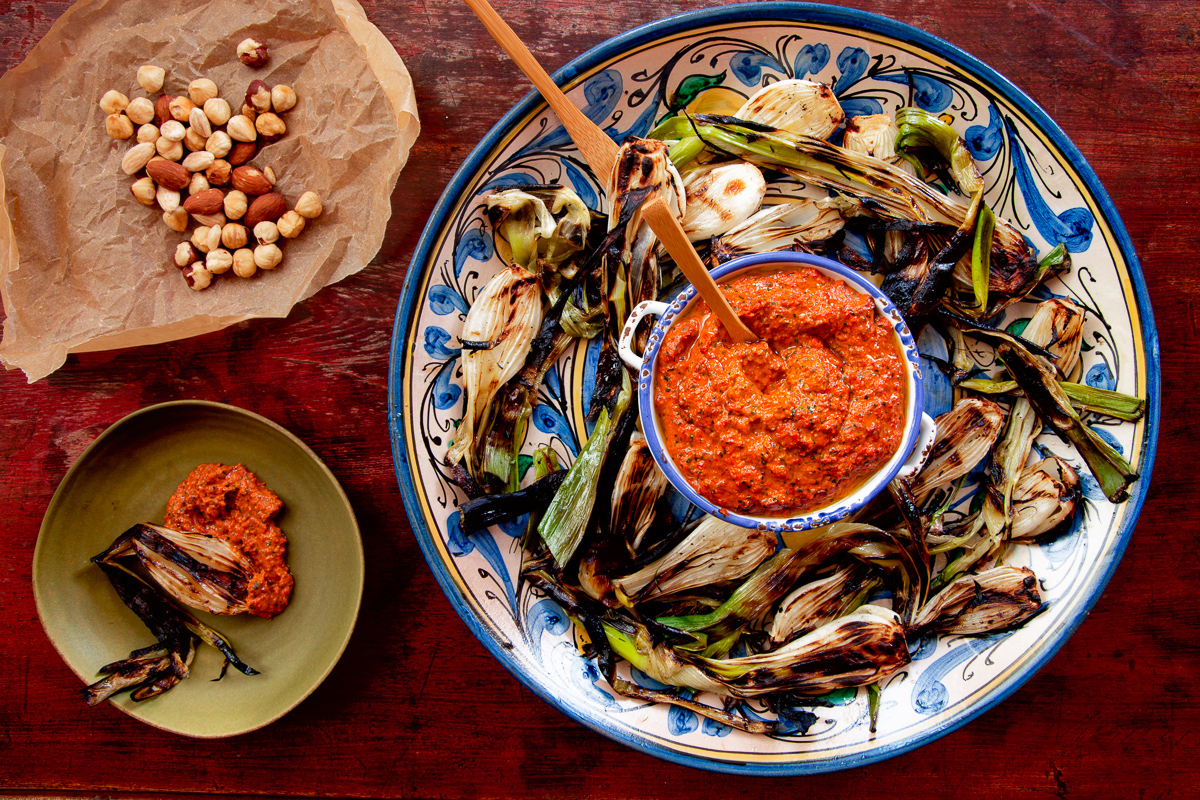 Here’s the scene: working-class neighborhood, first house, first back yard, first patio.  Radical move against the local pave-the-yard-build-a-grape-arbor esthetic.  We christened the patio’s finish by inviting neighbors Pam and Chris to join us for Grilled Spring Onions with Romesco.  At the time, almost two decades ago, I’d heard of Romesco, the thick Catalan sauce based on roasted red peppers and nuts, but not grilled spring onions, which my wife assured me was a big deal in Barcelona.  She was right.  The Calçotada is a month-long Barcelonan lovefest to calçots, spring onions, which are then grilled and slathered with Romesco.  Imagine a sloppy Falstaffian bender lasting most of April, involving untold quantities of red wine and masses of fragrant grilled onions wrapped in newspapers or served in inverted clay roofing tiles and eaten with your hands.  Uh-huh, who isn’t down for that? 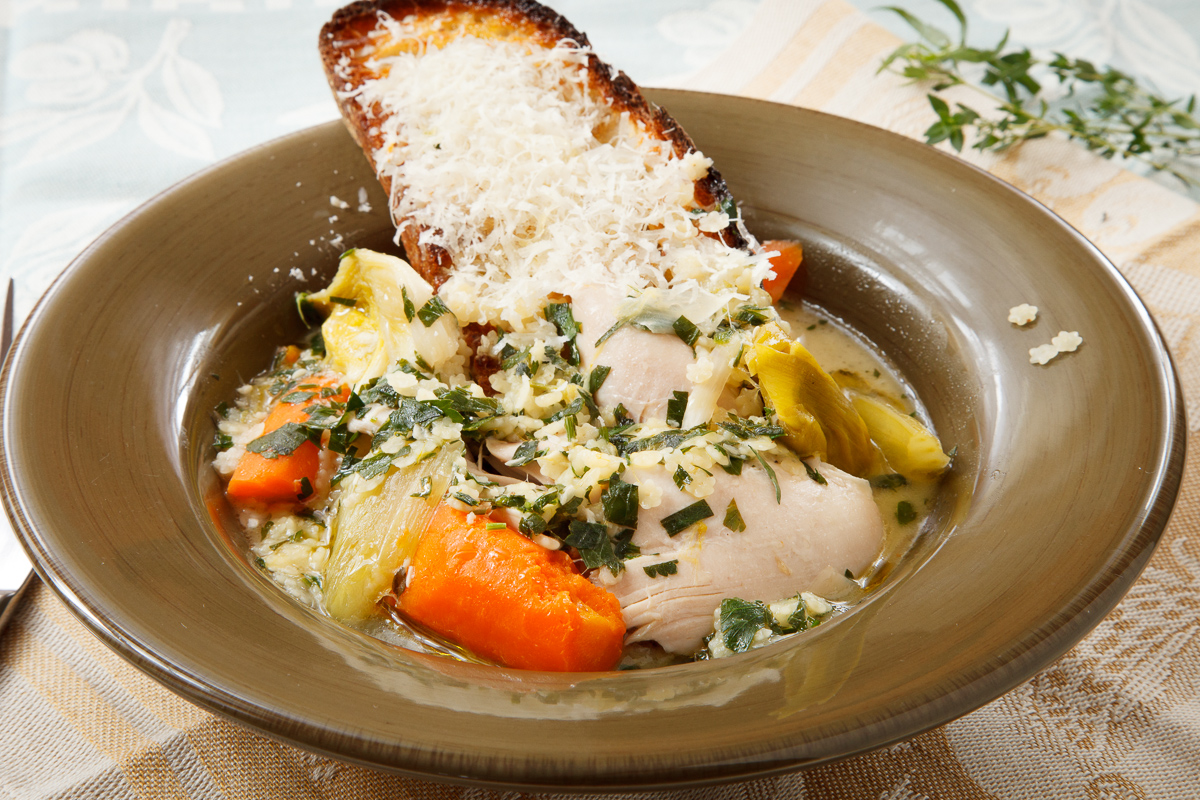 After this week you might be forgiven for thinking that we’ve changed our name to Mastering the Art of French Carroting, or perhaps Babette’s Carrot.*  The prominence of carrots in the last three posts  was pure happenstance, answers to the question: What do we like to cook in the pressure cooker?  Turns out carrots figure in a lot of what we like, including this week’s recipe, Oliver’s Chicken Stew.

One of the pleasures of travelling is tdrawing close to the seemingly familiar only to suddenly discover it strikingly different, like this Puglian Barley Salad with Pecorino Cheese.  Looks ordinary.  But the taste – not like barley on this planet.  Many of the more forward thinking participants in Italy’s agritourismo movement are attempting to preserve regional variations on farm products that for one reason or another have fallen from grace or never gained the favor of larger commercial ventures. Barley is a case in point–in Puglia, where it’s often hulled, rather than pearled, it’s chewy.

And chewy barley is a delight.