Ceci n’est pas une quiche.  It’s a Swiss Chard Tart with Gruyère and Anchovies.  Quiche sounds so seventies, like the ubiquitous anonymous “white wine” that came into vogue as an alternative to cocktails during the same 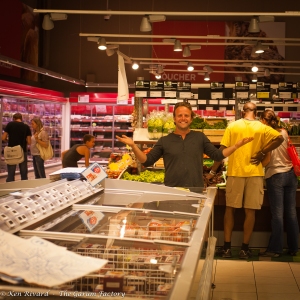 culinary epoch.  Boring.  White.  Food.  But a tart, a tart can play.  Sweet or savory, rich or light, it has no rules beyond the obligatory crust, and inclination to use whatever looks good in the market that day.  While not all of the produce we saw in Provencal markets was preternaturally perfect, most of it was really good, and there was always at least one vendor selling a spectacular version of what we needed, including these greens.  The chard in the photos, by the way, is American, but still easily the equal of the French version, which tends to be a little more, well, petite.

We spent a lot of time in markets, in Cavaillon and Coustellet, with others on the trip eager to turn marketing trips into competitive scavenger hunts.  Keeping everything straight–who was buying what and for which dish–could be a daunting and on occasion an item would slip out of the marketing basket–or never make it into the basket at all, especially since Jody and Tom* were often prepping two meals ahead.  On Wednesday, for example, Jody had to shop for the next day’s picnic** in an olive grove hard by a local mill, as well as think about advance prepping for the the goodbye dinner Thursday evening.

After having finished an afternoon foray into the market in Coustellet, including a pause for a beer and a socca at the little open air concert organized to celebrate the 10th anniversary the market, we headed back to the van.  Suddenly Jody cried out. ‘Wait!  We forgot something!”  Two somethings as it turned out: the flour for the Tartes aux Blettes (Swiss Chard Tarts) and the chickens she’d also planned on roasting for the picnic.  We waited in parking lot as Tom rushed back to Gouin, the famous Coustellet shop that is both a restaurant and a vendor of all things culinary–poultry and meat–both raw and cooked, cheeses, patés, wine, whatever you need for a delicious meal.  After 10 minutes, he returned with the news that not only did Gouin have chickens, but that they would roast the birds for us and have them ready and waiting the next morning.  He winked at us.  No one would ever know.  The flour was a different story.  The only place we’d be certain to find it in the late afternoon was the new nearby giant Super U. We arrived at the Super U ten minutes before closing, but we scored some bio flour, along with paper napkins, cornichons and a few other things.

After dinner that night in Amy’s kitchen, Jody pulled out the Super U flour and started making dough for the tarts.  “This feels odd,” she said after a few minutes.  She sniffed the flour.  “It smells like chick peas or fava beans.”  Amy put on her glasses, peered closely at the bag and pronounced that we’d bought farine d’épeautre, farro flour.  Farro is a delicious grain, but it is very low in gluten.  You can use it to make bread and pasta, but it’s usually a good idea to mix it with wheat or semolina flour for a bit more backbone.  Too fragile to use on its own for a tart crust.  Jody pressed the dough together in large blob, wrapped it up and threw it in the refrigerator.  We’d have to go out early the next morning for flour in order to have the Tarte aux Blettes ready for lunch.  She washed her hands, poured herself a glass of wine and sat down with the three of us.  “Who wants to play Bananagrams?” she asked.

**Glass stemware, silver and real plates seem to be de rigeur for French picnics, as is a fetching alfresco environment.  If there are no ruins handy, an operating olive press will do. 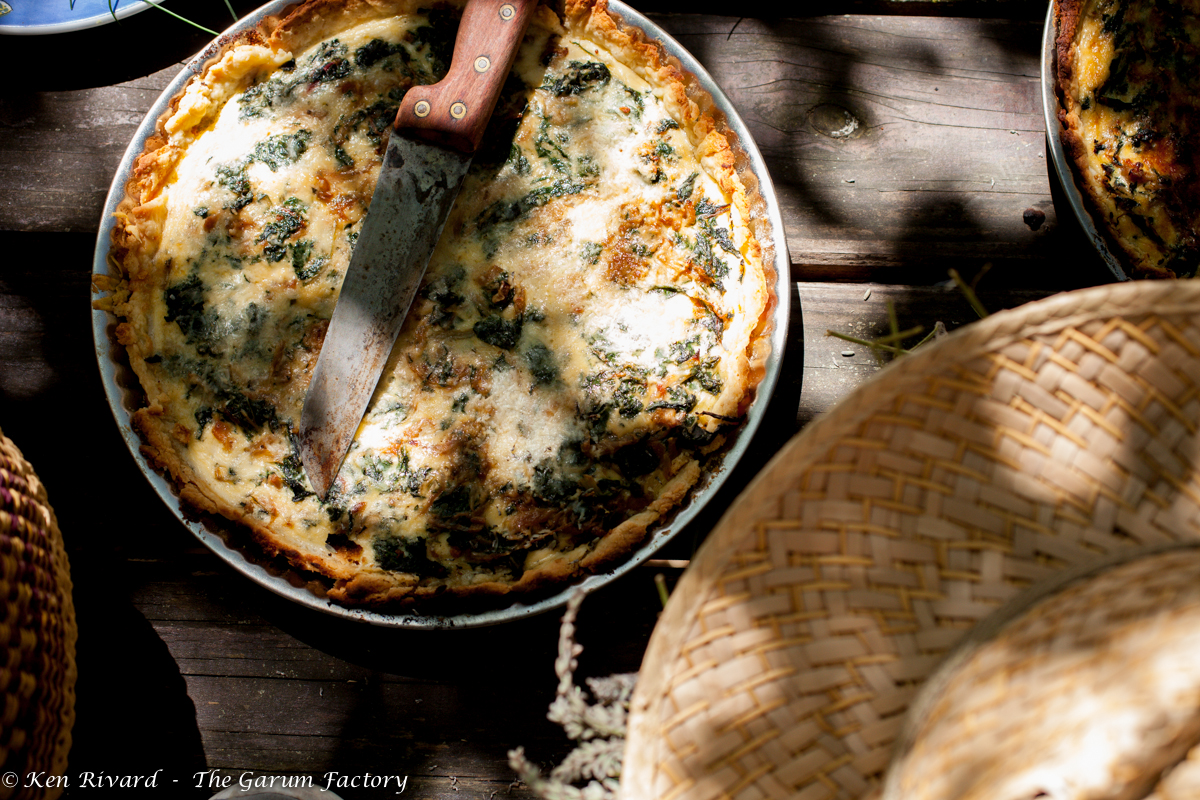 Use an 11-inch tart pan with a removable bottom.

Note: We use this dough for both savory and sweet tart shells.  Only use the sugar and lemon zest if you want dough.  Add them right after the salt. 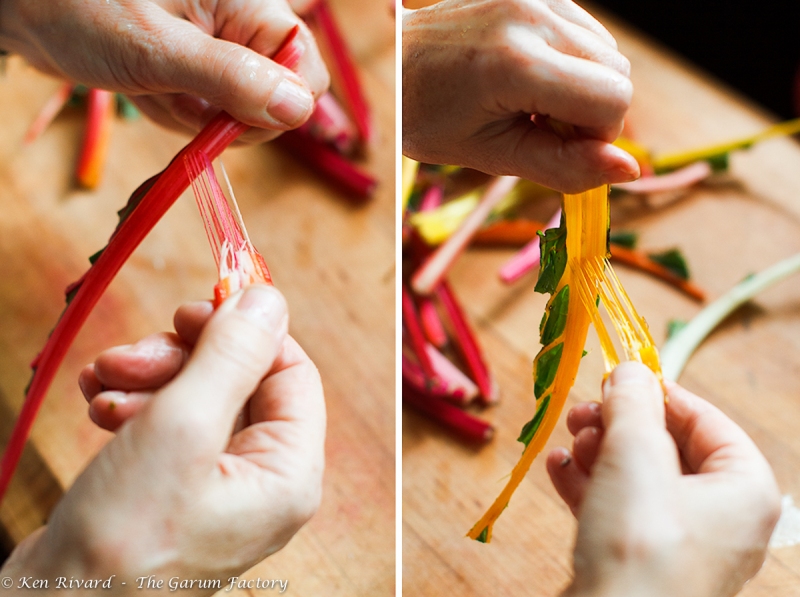 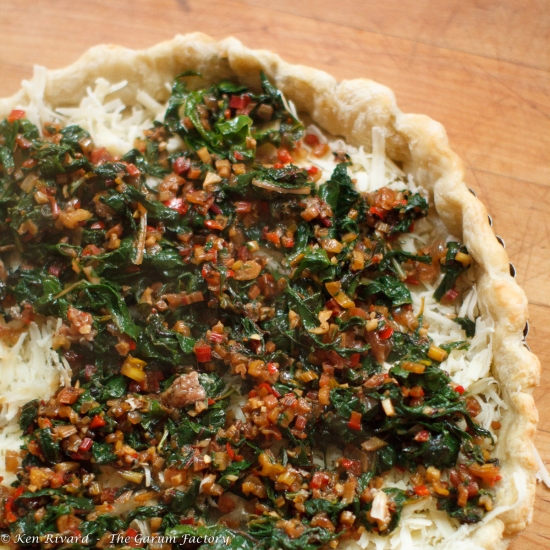 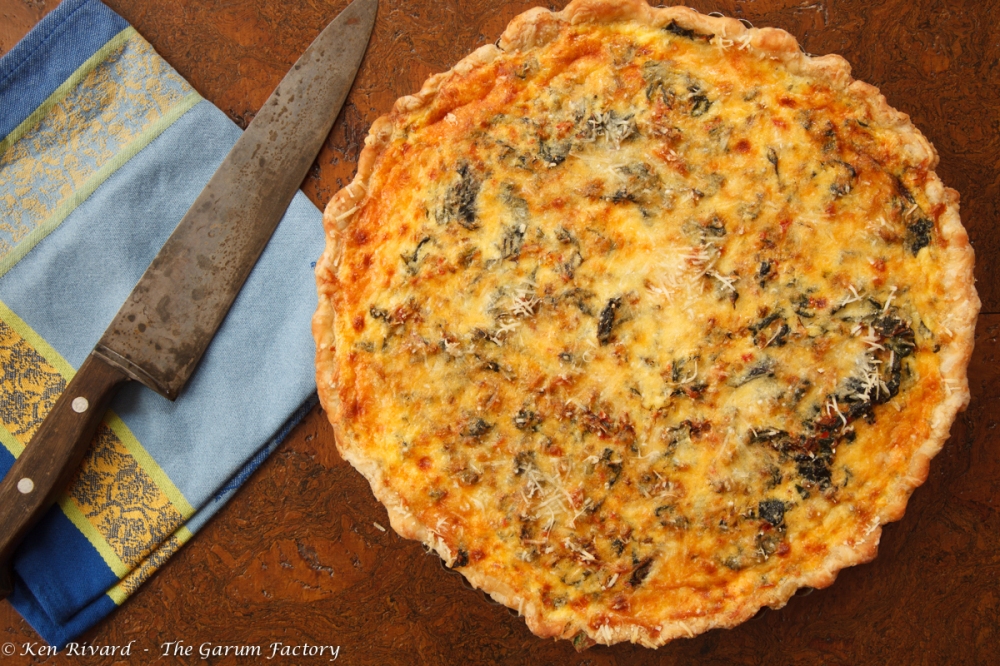 Everyone gets a little jittery about learning to make a pie crust from scratch.  We’ve all made our share of pliable cardboard, but I’ve taught enough people how to make dough to guarantee that with practice, anyone can do it.   I’ve listed the worthwhile bits of advice about the process below. It’s not complicated–you just have to practice.

You’d never know it from the pictures, but France is still in the middle of a very tough economy.  “Le Crise,” as it’s known there.  Young people find it very hard to find work and everyone economizes.  In that spirit, I did as the French would ordinarily do with this recipe–I used the Swiss chard stems.  They’re beautiful, and there really is no reason to discard them.  Waste not want not. As you can see by the pictures, I like peeling away the stem fibers before chopping them.  (Would you expect any less from someone who peels her tomatoes?)

PHOTO NOTES: This is a very photo-heavy post.  The first gallery is a walk-through on making a pie/tart crust–it doesn’t include a photo of the ingredients.  We figured you already what butter, flour and salt look like.  If you make your own crust, or use a premade tart shell, you might want to advance to the second gallery, which shows Jody making the tart after she already has a baked crust in hand.

Crust Gallery – Don’t the number of photos fool you.  The first half of this process – making the dough and getting it into the refrigerator – shouldn’t take more than 15 minutes. 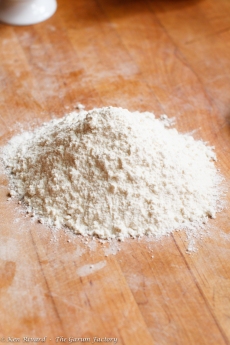 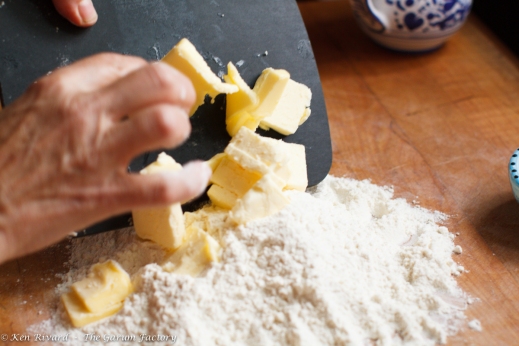 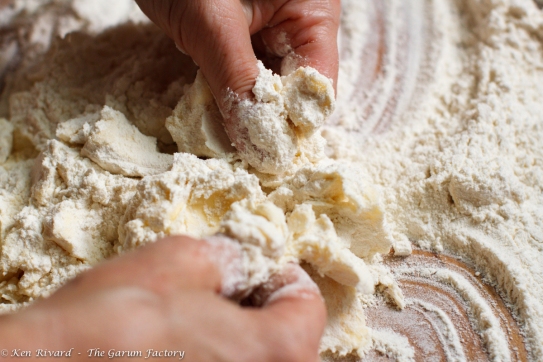 Pinching the butter into the flour. 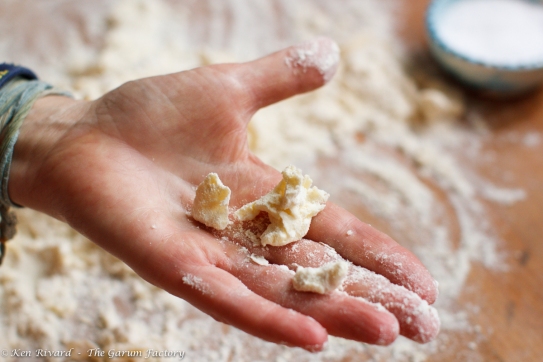 Keep pinching until all the butter looks like this.

Make a trough in the mix for the water. 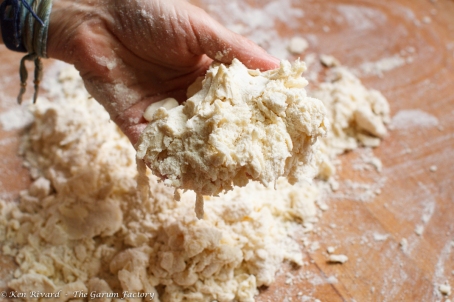 Still a little too dry. 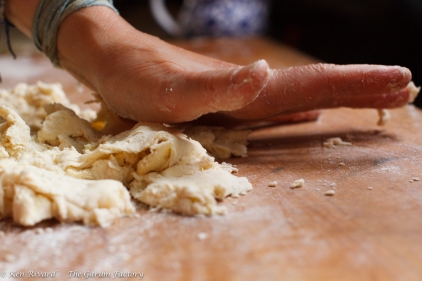 Now push the butter into the flour with the heel of your palm.

Keep going until everything is flattened out. 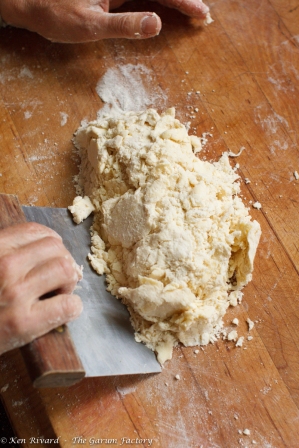 Bring it all together, then repeat.

Push-smearing the butter. Don’t try to mix the butter in–you want it to streak the flour. 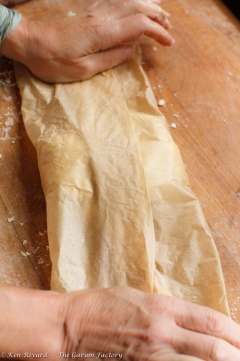 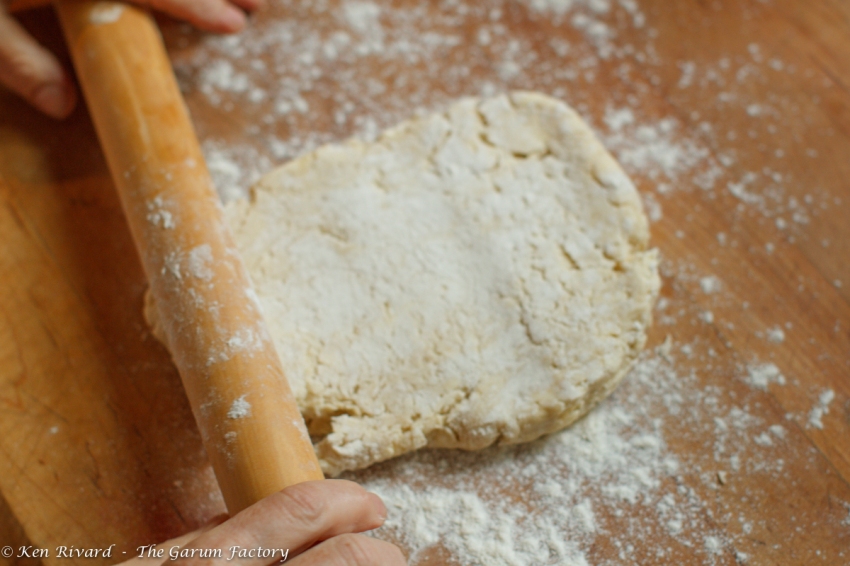 Fold the rolled dough into quarters. 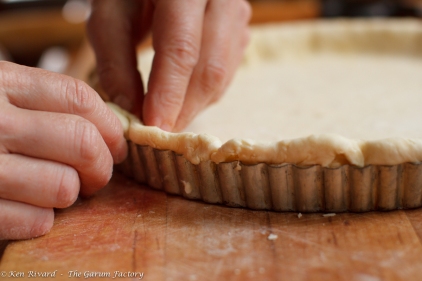 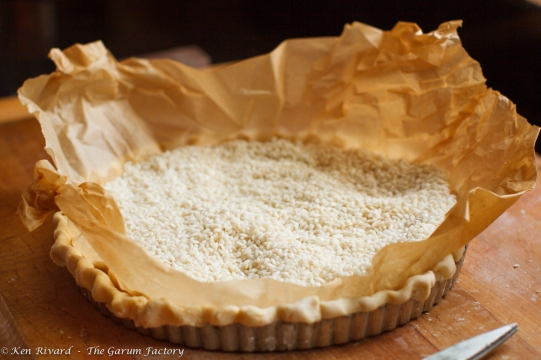 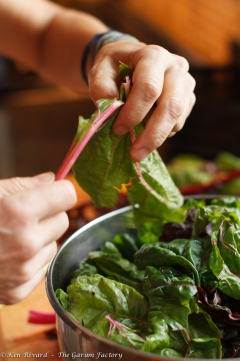 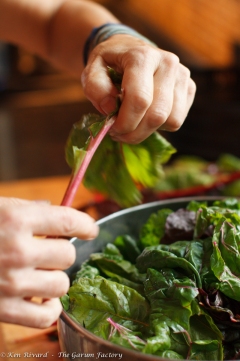 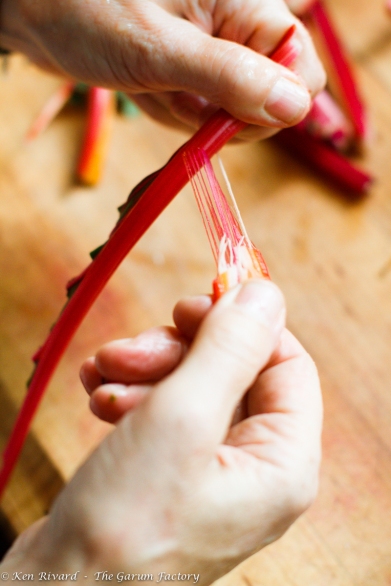 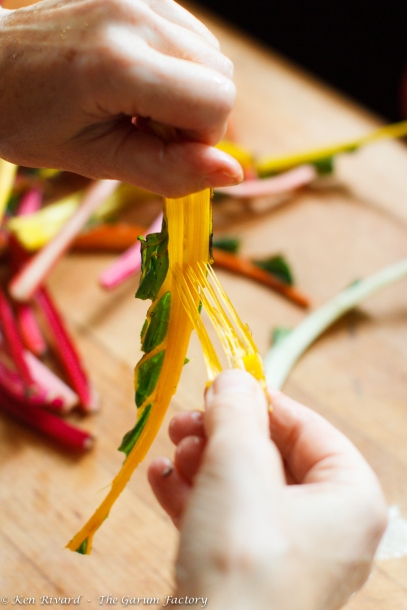 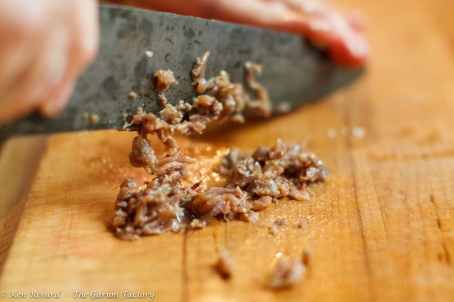 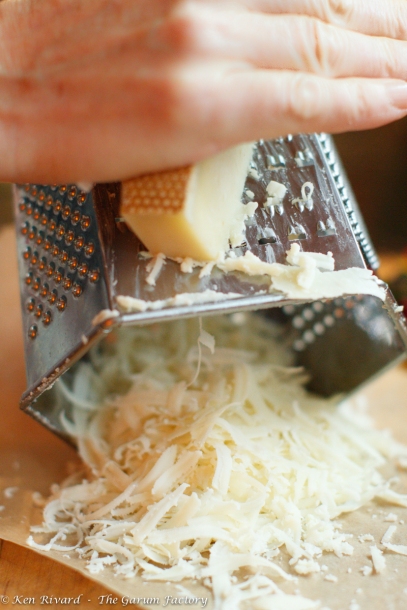 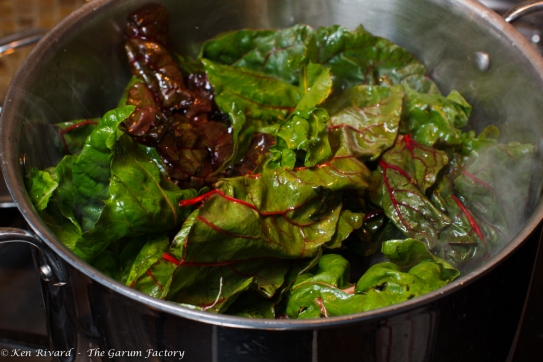 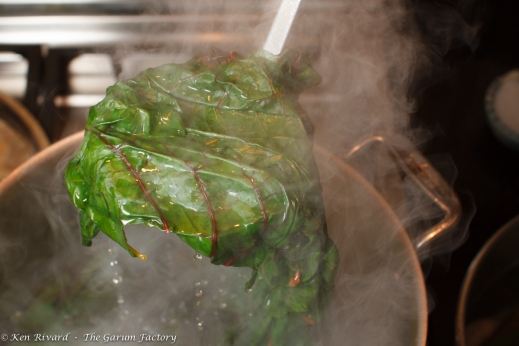 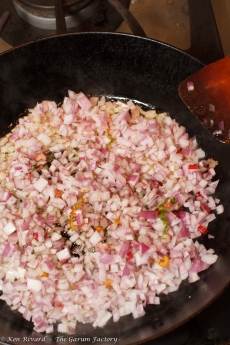