How often do you discover something delicious from a part of the world you know and you’ve never even heard of it? That’s the case with trahana for us, from Greece. 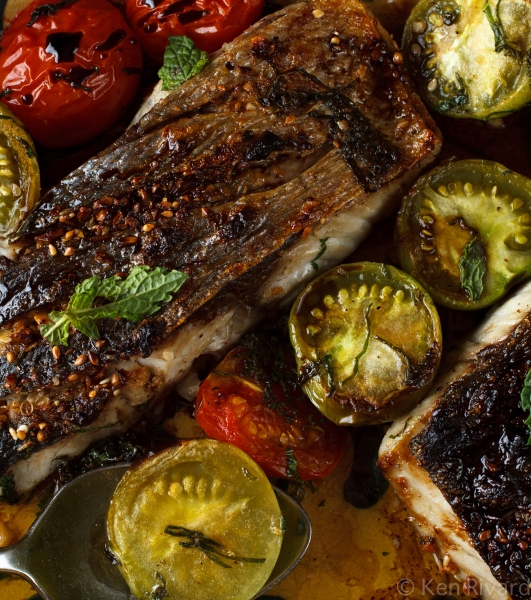 Three or four summers ago I was standing in water up to my knees on a sandbar known as Horseshoe Shoal in the middle of Barnstable Harbor, that long shark-shaped body of water that swims between the shores of Sandy Neck to the north and the town of Barnstable to the south on Cape Cod.  As I watched, a flock of seabirds raced down the channel that passes between the sandbar and Sandy Neck.  The birds swooped and cried, strafing a line across the water with their beaks as precise as a squadron of P-51 Mustangs.  Then I saw it, a deep slate discoloration below the channel surface, an undulating gray movement that fragmented into hundreds of individual fish as it flashed by me.  I wasn’t the only one to take notice.  Small boats stopped in the channel, people rising to stand, hands shading eyes.  “Blues!” a man cried, waving and pointing.  It was August and the bluefish were running.  For anglers and eaters on Cape Cod, only striped bass equal the pleasures of bluefish.  Stripers taste more delicate, but bluefish fight harder.  This week’s dish: Bluefish with Dukkah, Tomatoes and Garlic Yogurt.

Food bloggers and their readers tend to be a supportive, upbeat, crowd (“Kale!  Wow!  Double thumbs-up!”).  We don’t get many complaints, helpful suggestions for improving the site, but every few months this plea arrives: “Can’t you do something so we don’t have to cut and paste your recipes?”  Never let it be said The Garum Factory …

Pity Antoine-Augustin Parmentier.  The late 18th century polymath would be rolling in his grave in Père Lachaise were he aware of the abuse heaped upon his beloved potato by modern nutritionists.  If there were ever a lobbyist for potatoes, it was Parmentier.  In Parmentier’s time most of Europe regarded the potato as fit for little more than animal fodder. In France cultivation of potatoes was forbidden by law, a natural outgrowth of then current French belief that potatoes were thought to cause leprosy. Parmentier became acquainted with potatoes while fed them as a prisoner in a Prussian prison during the Napoleonic wars, but few Frenchmen were willing to take him at his word about the benefits of eating them. Determined to bring his countrymen around to his way of thinking Parmentier threw himself into a decades long campaign of public demonstrations, potato-themed dinners for the rich and influential, and public lectures.    Today, as a member of the Gang of Three (along with rice and bread), potatoes stand accused of undermining the People’s waistline, usually in league with its natural allies, cream and cheese. But there’s a way of having one potatoes without taking on a wheelbarrow of calories. Enter Boulangère Potatoes. 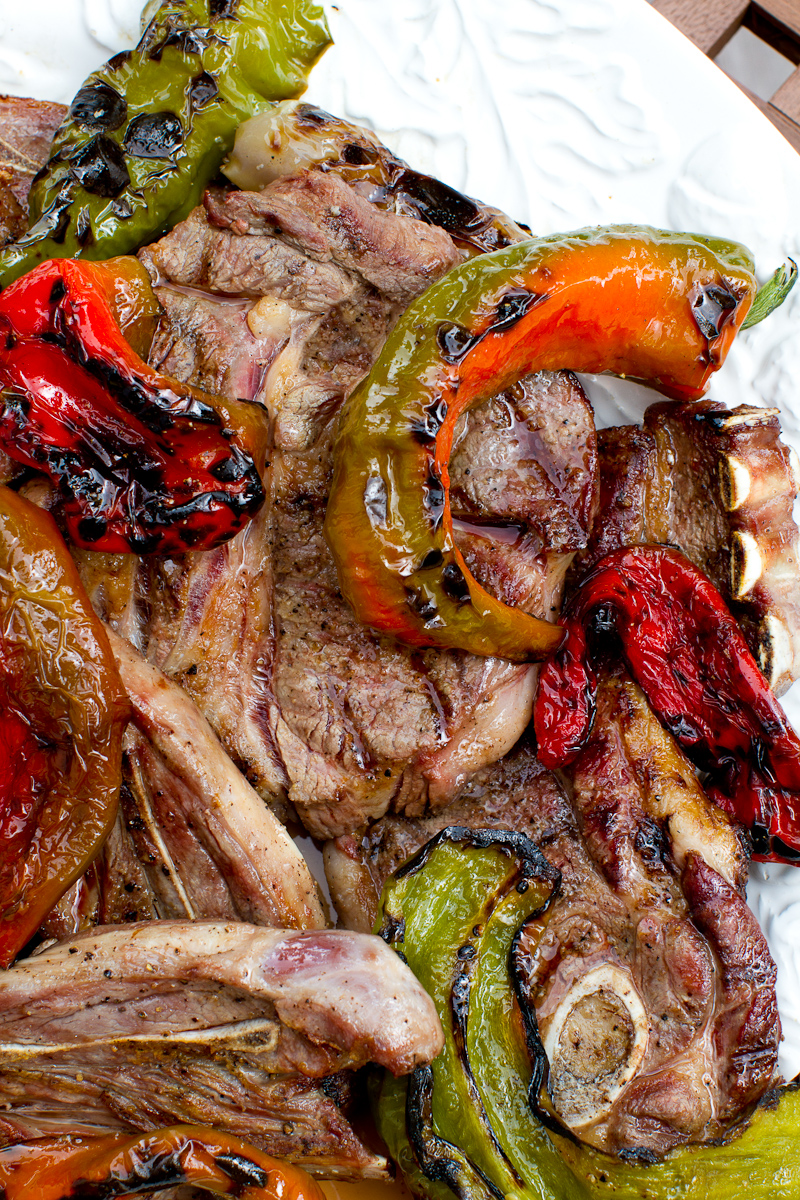 Nobody hates lamb blade chops.  People either love them, or they’ve never heard of them.  Viewed from a diner’s perspective, lamb blade chops are to loin chops as  pork ribs are to pork loin.  There’s fat, gristle, a bit of bone, and you need to work a bit more to get the good stuff.  The reward is heaps of flavor.  If you fall into the never-heard-of-’em group, then this week’s Grilled Lamb Blade Chops with Hot Mint Chutney is your opportunity to step-away from the fancy-dress dinner party of loin chops, leave your champagne flute of civilisation on the veranda, and stride across the lawn through the baffled croquet players as you peel off your tuxedo and enter the forest. 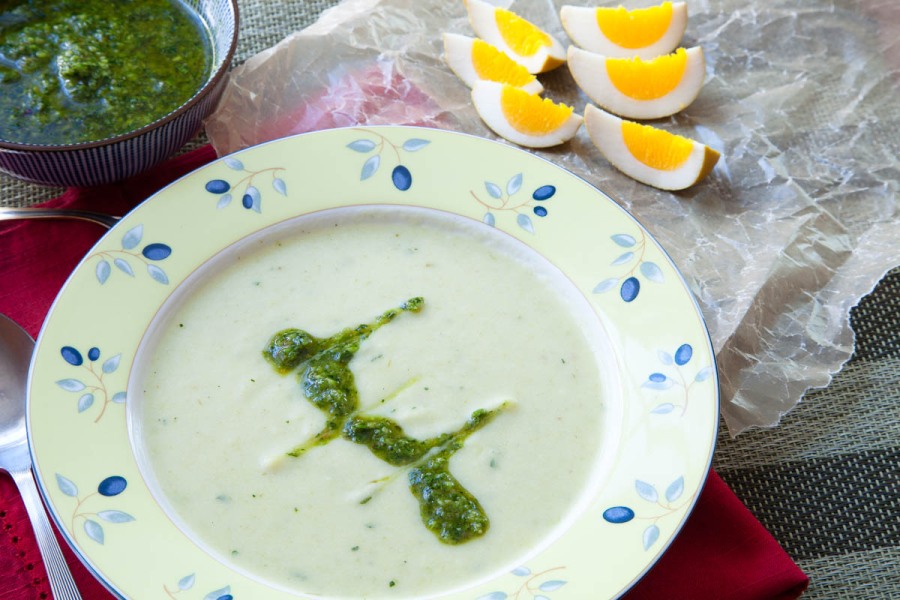 There’s nothing like a bowl of cold savory soup in hot weather, and until the day we do a post on jellied madrilene, this Chilled Garlic Scape and Buttermilk Soup will have to stand in.  It’s a wrinkle on vichyssoise, close enough to feel familiar, but with a few turns you might not have expected, like scapes and buttermilk.

Tart, garlicky, cool–you’re going to love it on a sweltering night. 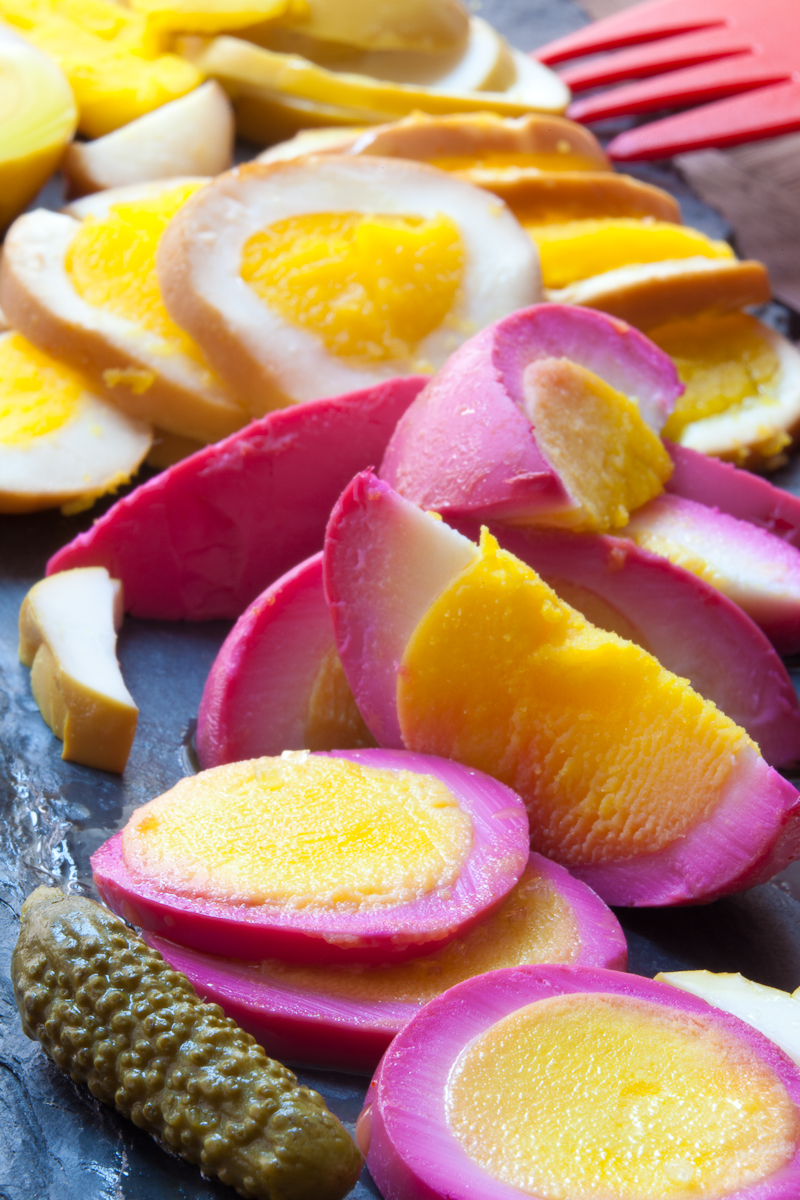 Pickled Eggs 3 Ways is the final and most colorful installment in our recent trilogy of egg recipes.  We made two batches of each of these eggs, a week apart, both to test the recipes and so I could photograph the process from pickling juice to finished eggs.  As I write this the first batch of three dozen eggs is nearly gone–in case you’re wondering if kids will eat pickled eggs,  the answer is Yes, they will.  Who can resist wedges of a saffron and purple egg, child or adult? These eggs are tart, but not completely sour (note the sugar in the recipes), which makes them a flexible dining companion.  Of course pickled eggs are the ultimate picnic food–festive, not prone to spoilage, and given to pairing nicely with other preserved items like cheese, smoked fish–and great beer.  They stand out with mixed greens–and when combined with with wasabi mayonnaise make a killer egg salad