I first crossed paths with an espresso corretto on a lunchbreak while cycling through the Veneto, leading to an afternoon that was both weirdly exhilaratingly and wobbly.  A similar cycling break in Puglia this past September, after pedaling up a VERY steep hill into town, led to my introduction to an affogato, sans grappa, although I was to shortly discover* that an affogoto might be experienced in either a “corrected” or “uncorrected” version.  And you need not administer your correction exclusively as grappa.  On the day we shot this post the local grappa well had run dry, so we used rum in its place.  Guess what?  It works!

Did you make the brandade two weeks ago?  And the braised pork with chow fun noodles the week before that?  Okay, here’s your reward.  Choose your correction (no bustiers or riding crops, please).  The rest of you will just have to watch.  Enjoy.  Ken

I’ve never been a fan of Irish coffee, especially at night.  It wreaks havoc in my body.  I lie awake as the caffeine, sugar and alcohol duke it out over who’s in charge.  Afterward, I feel exhausted and my head aches.

A few years ago, our cycling  friend Vernon,introduced us to espresso corretto in the Veneto.  We were delighted to find out that we were expected to drink an espresso with a shot of grappa–at 11 a.m.  Wow.  Thank God for carless back country roads.  By starting at 11:00 you can have both espresso and grappa.  Hey, that’s what vacations are for, right?  And there was still time for a nap later, before going out that night.

This year when we were in Puglia, the correction was taken a step further with affogato.  I was nervous.  Now we were throwing sugar and fat into the mix.  The trick, we discovered, was to go for a long bike ride early in the morning, then have the affogato corretto as our reward after we got back.  It also helped to think of it as its own meal.  In other words, it wasn’t before or after anything else – it was the center of attention.  Then you take the nap.

When Ken and I were photographing this post and testing proportions, we made a dozen or so affogato corretto.  I inhaled the first one, then got a grip and restricted myself to a few sips (for tasting purposes ) for the remainder of the session.  I felt fine and I’m sure no one could tell what I’d been doing.

I recommend you assemble these ingredients on New Year’s Eve so you can make a meal of affogato corretto whatever time you wake up the next day.

P.S.  In the interests of authenticity we stuck to vanilla ice cream in the post, the usual choice in Italy, but I let myself experiment a bit over the next few days with our leftover ingredients.  My favorite was with chocolate ice cream and scotch, topped with crunchy Taza Chili Chocolate shavings.  It was fabulous. 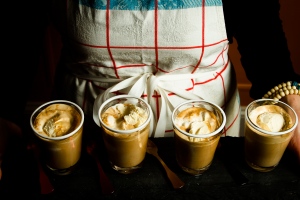 Go ahead; click on something to see it with a little more detail.  Left and right arrow keys will move you through the photos.  Hitting the escape key will return you to the real world. 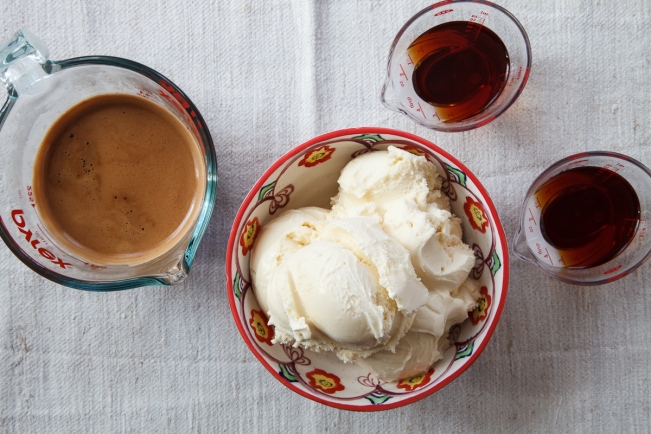 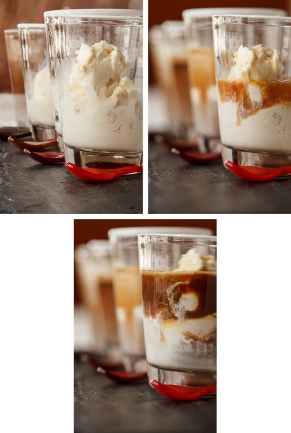