This week’s recipe for Fava Bean and Almond Soup takes its inspiration from an article in the New York Times Magazine last October, The Island Where People Forgot to Die.  The article describes life on the Greek island of Ikaria, where a startling number of people live to be 100 or older.  For over a decade the article’s author, Dan Buettner, with the support of the National Geographic Society, has been investigating communities where people seem to lead unusually long lives, places he and his partners, Dr. Gianni Pes of the University of Sassari in Italy and Dr. Michel Poulain, a Belgian demographer, have dubbed “Blue Zones.”*

Buettner has identified a number of lifestyle qualities which the five Blue Zones hold (mostly) in common, including a priority on family life, daily social engagement, a diet based largely on plants, especially legumes, low levels of smoking, and daily moderate physical activity.  Although all of the zones don’t share all of these qualities, all share most of them.  The zones are located in Sardinia, Okinawa, Ikaria, Costa Rica, and a Seventh Day Adventist community in California.  For a detailed explanation of the Blue Zone attributes, their expression in a different zones, and how the zones differ, you might want to read the article, or visit Buetner’s site, where he’s trying to capitalize on his work.

We’re not nutritionists, demographers or sociologists, so we can’t offer a critical opinion about the work of Buetner and his partners.**  Buettner himself admits that it’s early days in the task of unravelling the riddle of exceptional longevity, with more questions than answers.  While it appears that eating a plant-centered diet may be beneficial, he observes that social engagement may be at least as important as diet; and what people don’t eat (e.g. a lot of processed food) might be as critical to longevity as the healthy things they do consume.  Buetner even speculates that it’s possible that Blue Zone benefits might only accrue in a supportive context (i.e. a Blue Zone-like community) that places a greater value on social connection than individual ambition or financial gain.

If one accepts at face value Buettner’s descriptions of 70-, 80-, 90-, and 100-year-olds drinking, dancing and chortling over dominoes every night, it’s hard 1) not to think of the movie Cocoon; and 2) to resist the possibility that they’re on to something, if only in their degree of contentment.  The burden of old age would be considerably lightened if one remained physically and cognitively spry into the last decades of life.  If it also happens that a daily glass or three of wine with your pals extends your life by a decade while postponing the arrival of cancer or heart disease, well, that’s icing on the cake.

In that spirit–and because Jody and I hate New Year’s resolutions–over the next five weeks we’re going to offer up simple recipes in keeping with the culinary cultures of each of Buetner’s Blue Zones.  Since two of the zones are in the Mediterranean, some of the food may already be familiar; others (taro?) may not.  By any measure the food fits into what most people would consider “healthy eating.”  And who among us couldn’t use a few more greens or legumes in his or her diet?   This week’s recipe is a riff on the Sardinian love of fava beans.  The soup is simple to make and deeply satisfying to eat.  Who knows, you may even live longer.  Enjoy.  Ken

*A term he has copyrighted.

**We have no connection to Dan Buettner, to the BlueZones@ website, to the National Geographic Society or the Greek Island of Ikaria.  We have not been compensated in any way for the opinions expressed in this post, although if someone were to step forward and provide us with a two-week opportunity to judge Buetner’s observations firsthand we’d be willing to entertain the offer. 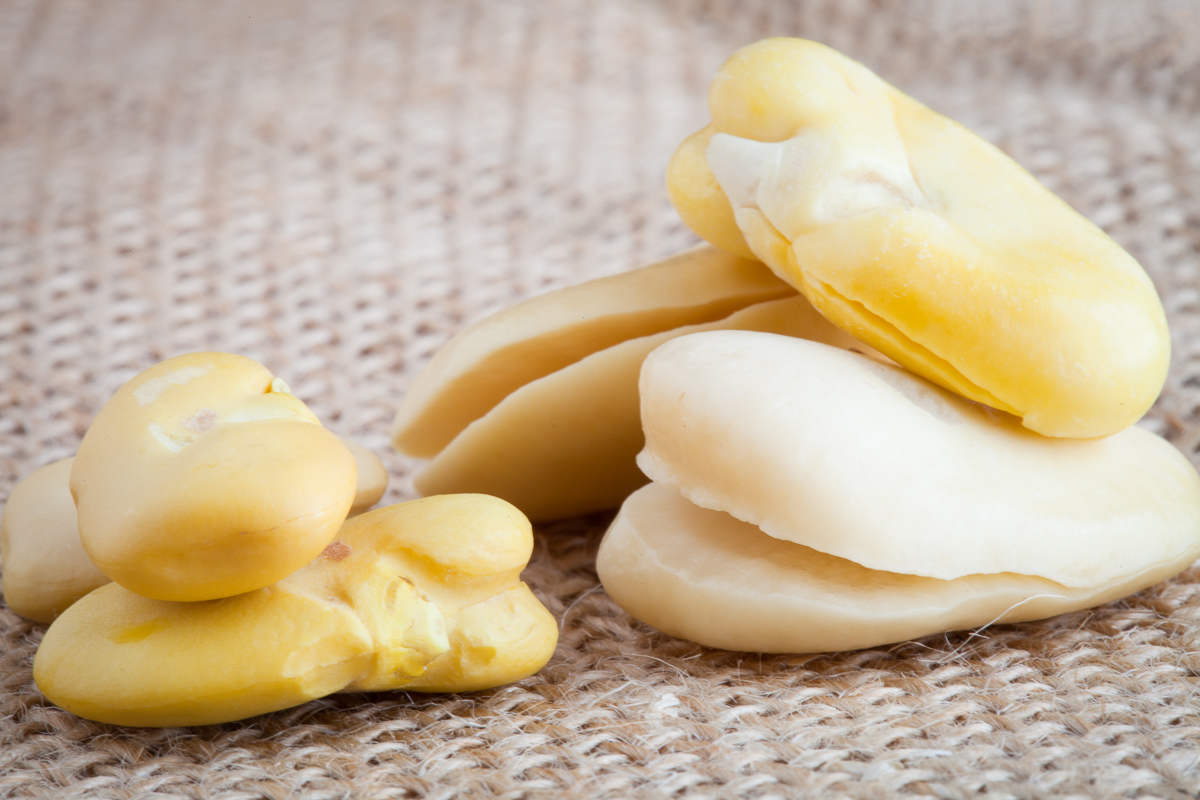 Fava beans, before and after soaking. 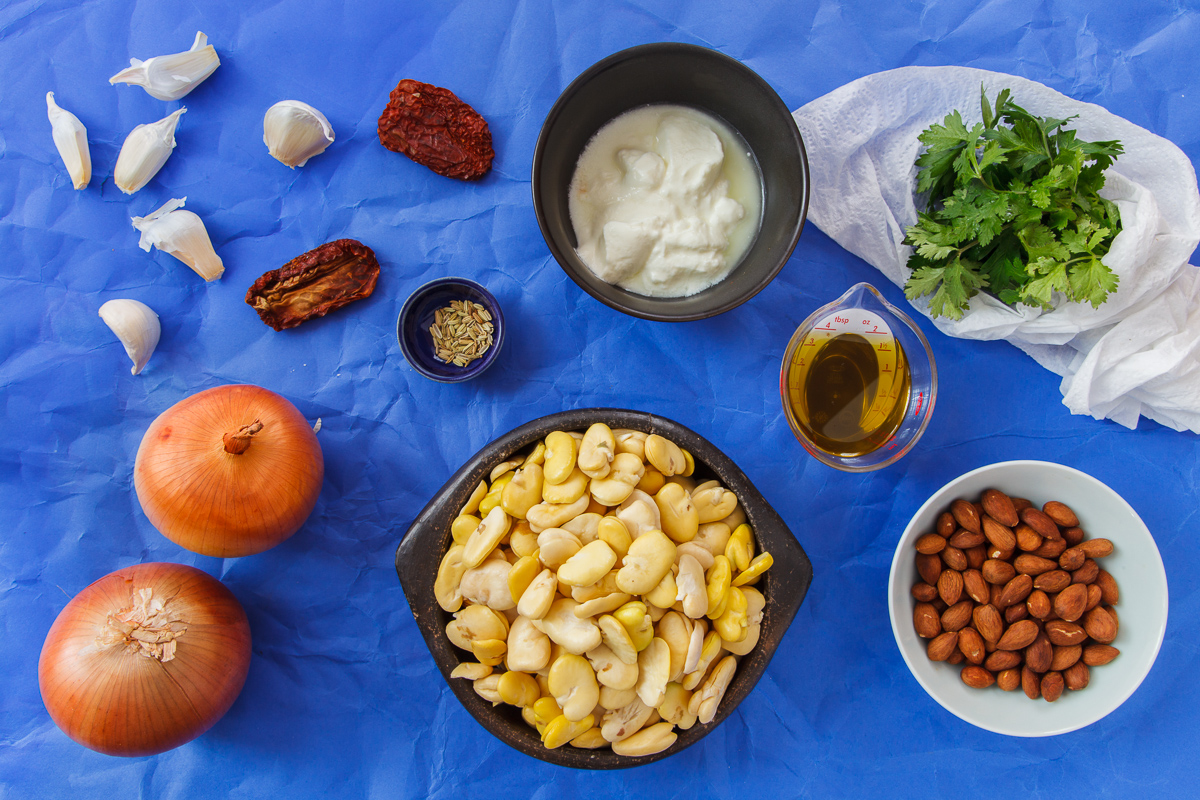 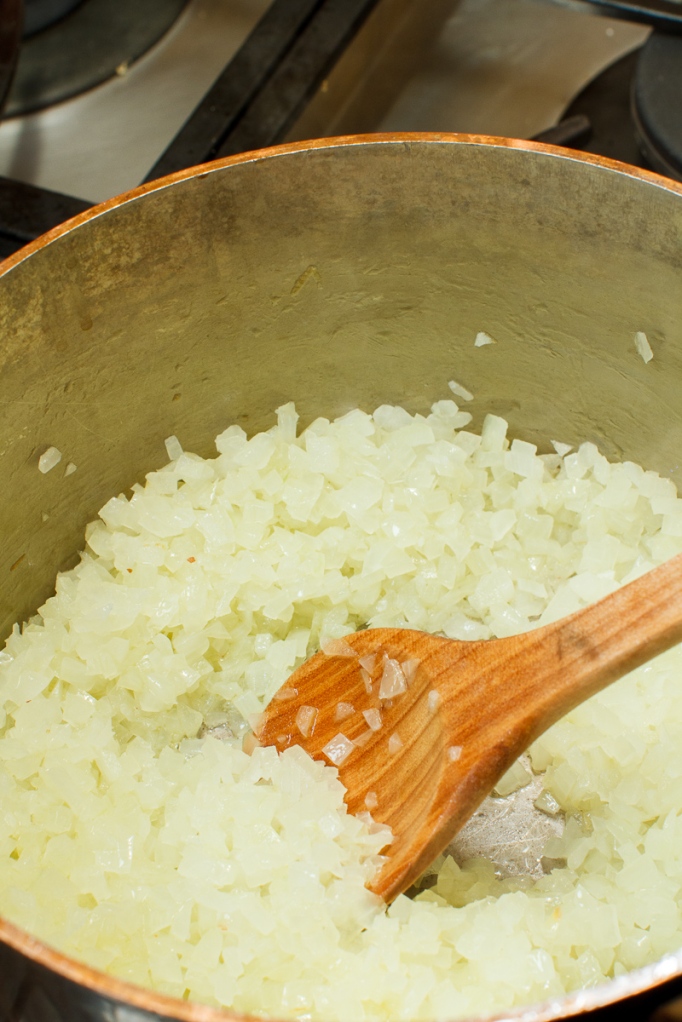 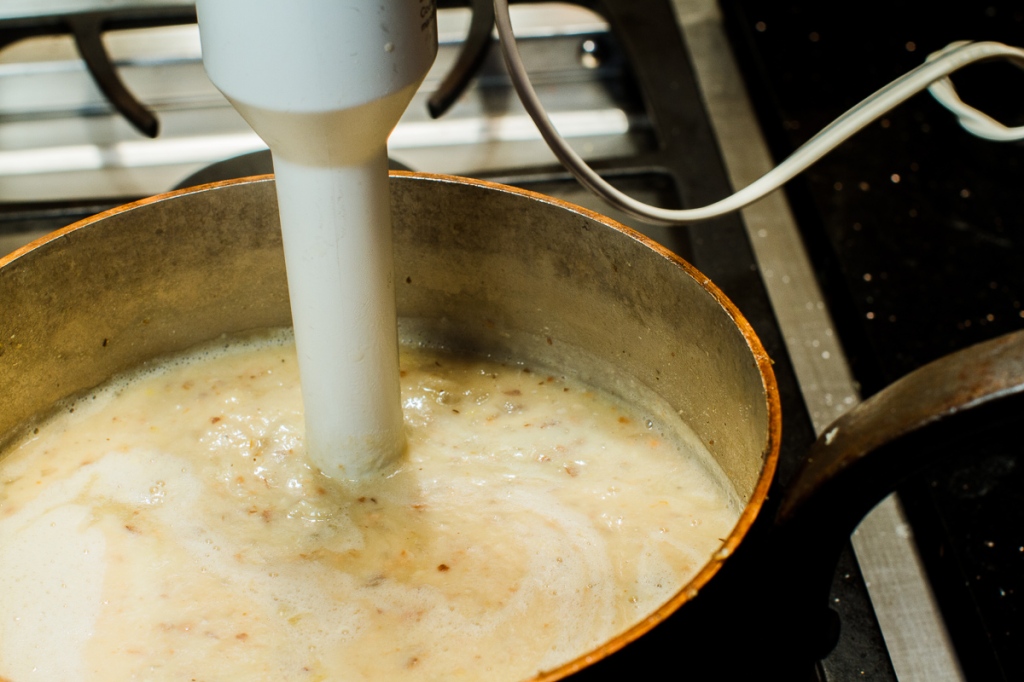 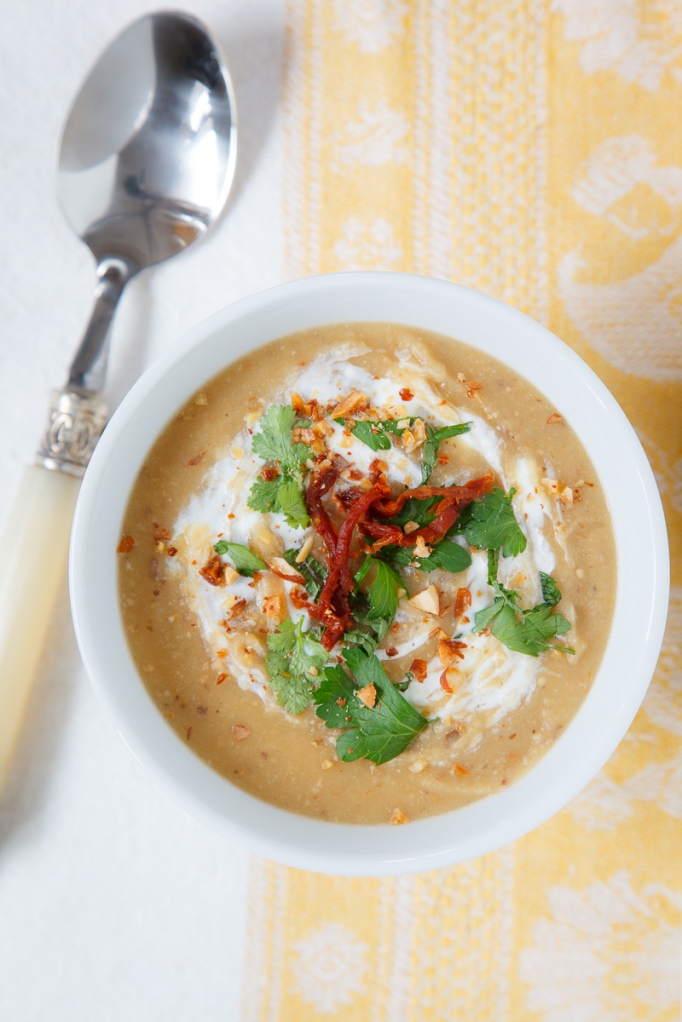 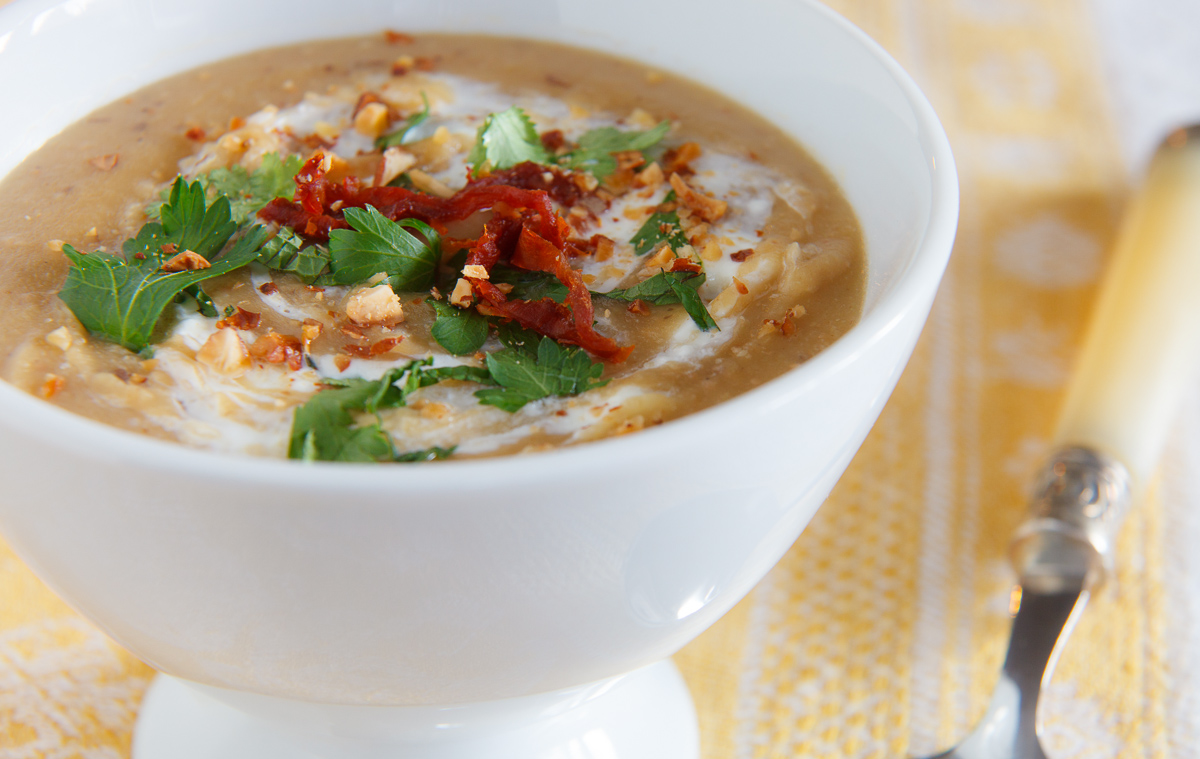 Dried favas are often already peeled, but if still in their skins, go ahead and buy them anyway, throwing in an extra handful to make up for the lost weight of the peels.  And yes, I do recommend peeling them.  After the beans have soaked overnight the skins usually slip right off.   If not, cook the beans in water for 10 minutes or so.  Cool and then remove the skins.  From there, proceed with the recipe, understanding that the beans will cook a bit faster than 30 minutes. 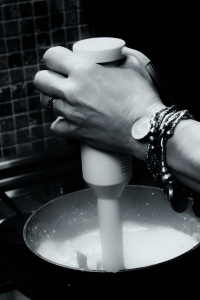 Go ahead; click on something to see it with a little more detail.  Left and right arrow keys will move you through the photos. 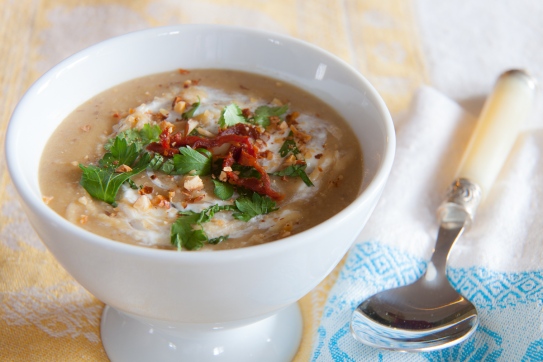 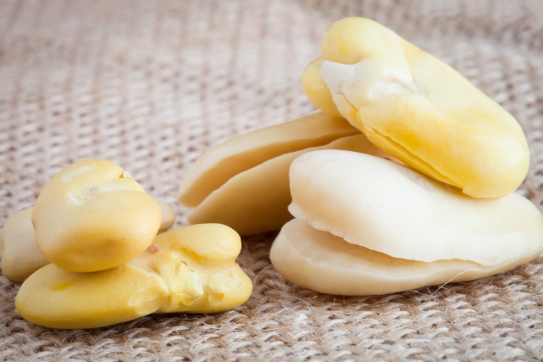 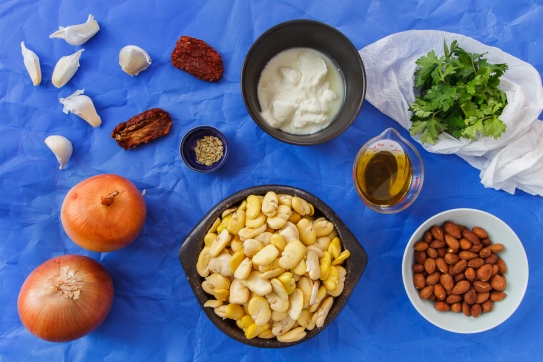 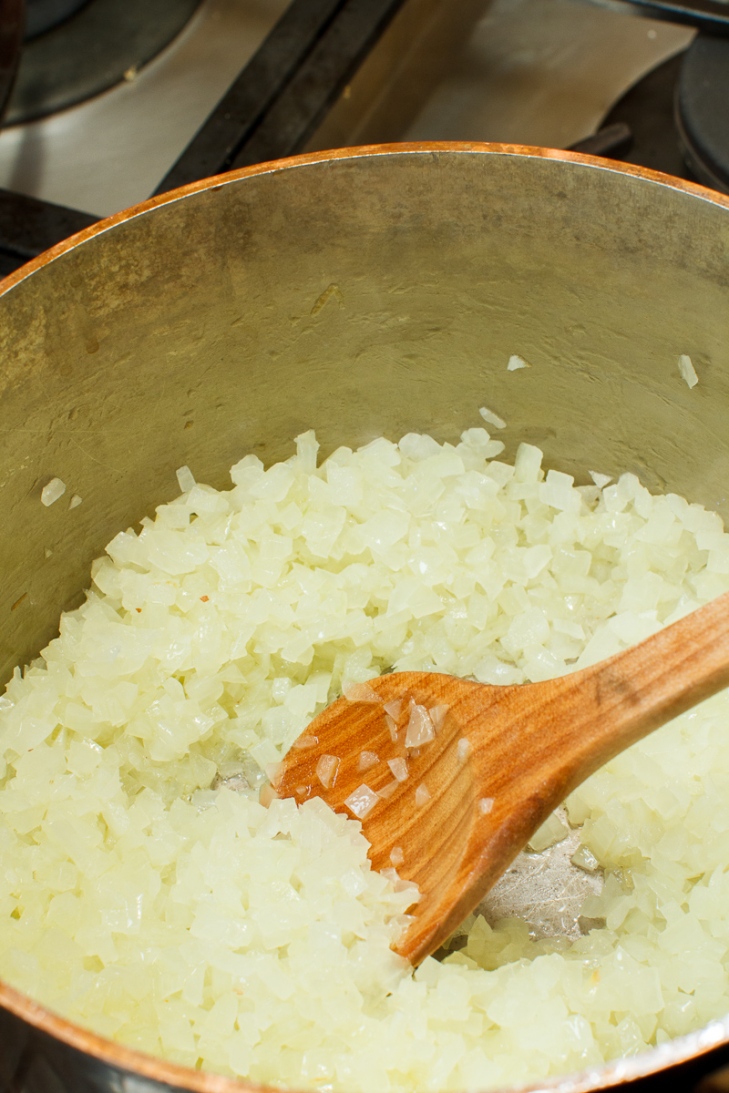 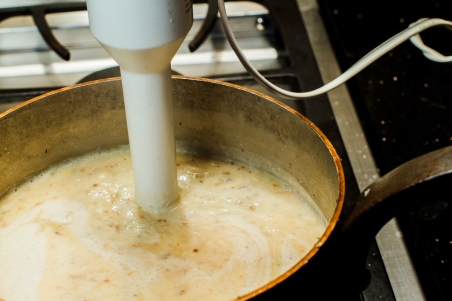 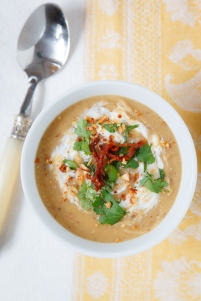 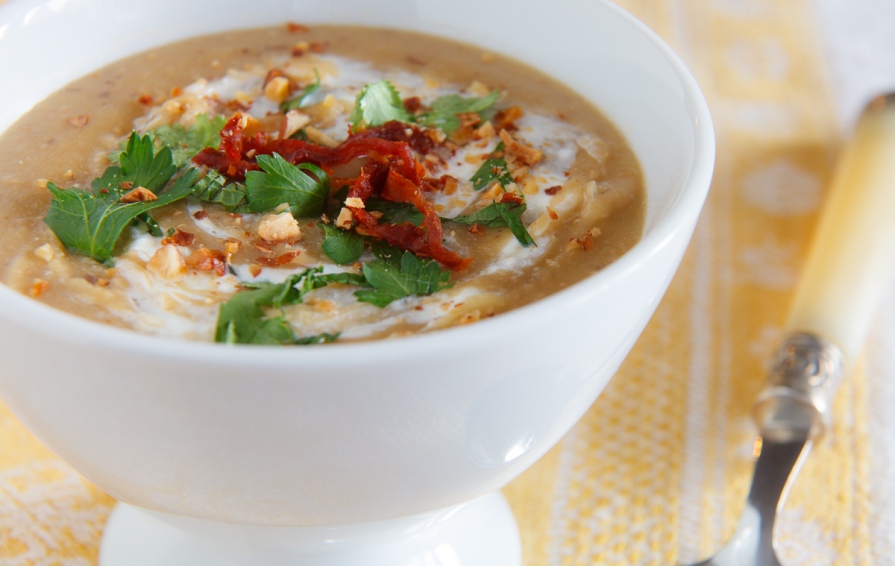 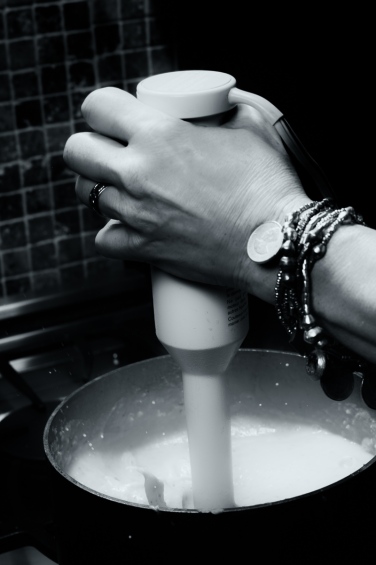