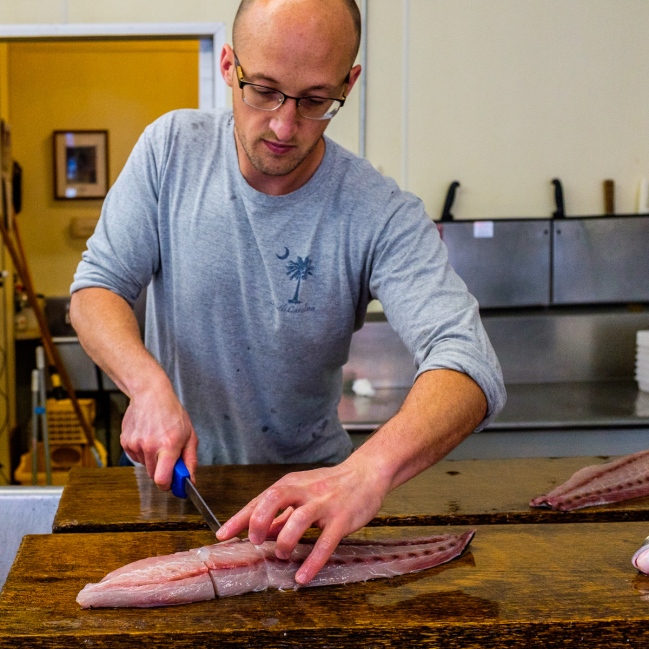 Peter Ryan, of Wulf’s Seafood, cutting a side of bluefish into portions, one of which appears above.

Okay, I admit it–I love fishy fish.  You can keep catfish, but once that’s off the table, I’ll eat everything else.  Bring on the sea urchin roe, mackeral, fresh sardines and all swimming things smoked and pickled.  All grand.  But if I were Neptune, sitting at my right hand, way above the salt, would be bluefish.  This week we’re serving Bluefish Agrodolce, an easy easy easy dish.  And when you’ve gotten agrodolce, a quick sweet-sour sauce, well in hand you can serve it with just about any kind of seafood with a bit of gumption.  Welcome aboard.

When I was a kid my primary experience with seafood was fish sticks.  Cheap, plentiful, and easily accepting of one of the world’s great condiments, tartar sauce, they were perfect for meatless Fridays in rural Michigan.  A taste for fish sticks, like a taste for macaroni and cheese, acquired early, gives one’sculinary life direction.  A communal soufflé made with canned salmon, fried filets of bass or trout or summer sunfish – we lived in the Midwest, after all – and an annual smelt fest rounded out my seafood experience.  As a special treat, when dining out, my brothers and I were allowed to order shrimp in a basket.  Later, after clambering several rungs higher on the ladder of prosperity and moving to the East Coast, we sometimes ate salmon.  After being introduced to bluefish and mackeral as a student in New England, I asked my parents why we’d never had it at home.  “Mackeral is for cats,” my mother replied at once, not even bothering to comment on the bluefish.  Fishy fish were all the same.

They’re not, I’ve since learned.  Each is delicious in its own way.  To my palate, bluefish isn’t the strongest (mackeral and sardines are more potent), but it is the meatiest.  It feels the most substantive.  It’s also the one I most love to eat cold, and the sweet-sour sharpness of agrodolce is as tasty cold or, really, at room temperature, as it is when warm.  My mother, who is no longer with us in spirit, remained steadfast in her dislike of fishy fish.  My father, whose memory is not what it once was, will still shake his head at it on a menu, until I remind him that he’s eaten bluefish at our house and and liked it.  “Oh yes,” he says, lighting up at the recollection, although I can’t tell if the pleasure is really coming from his recall of the seafood or a grilled potato that accompanied it.  “That’s right!  I did like it.  It’s a fishy fish.”   Enjoy.  Ken

The red snapper is trying to catch up with the bluefish. Not a chance. 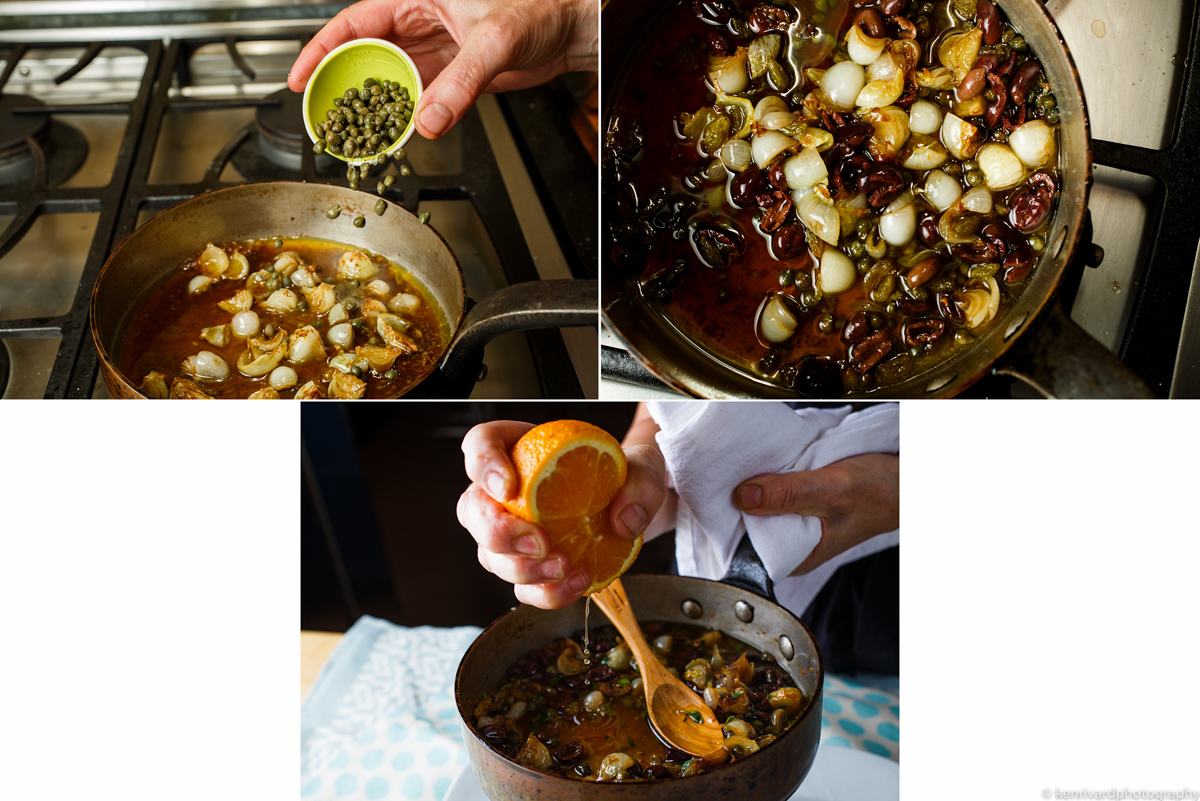 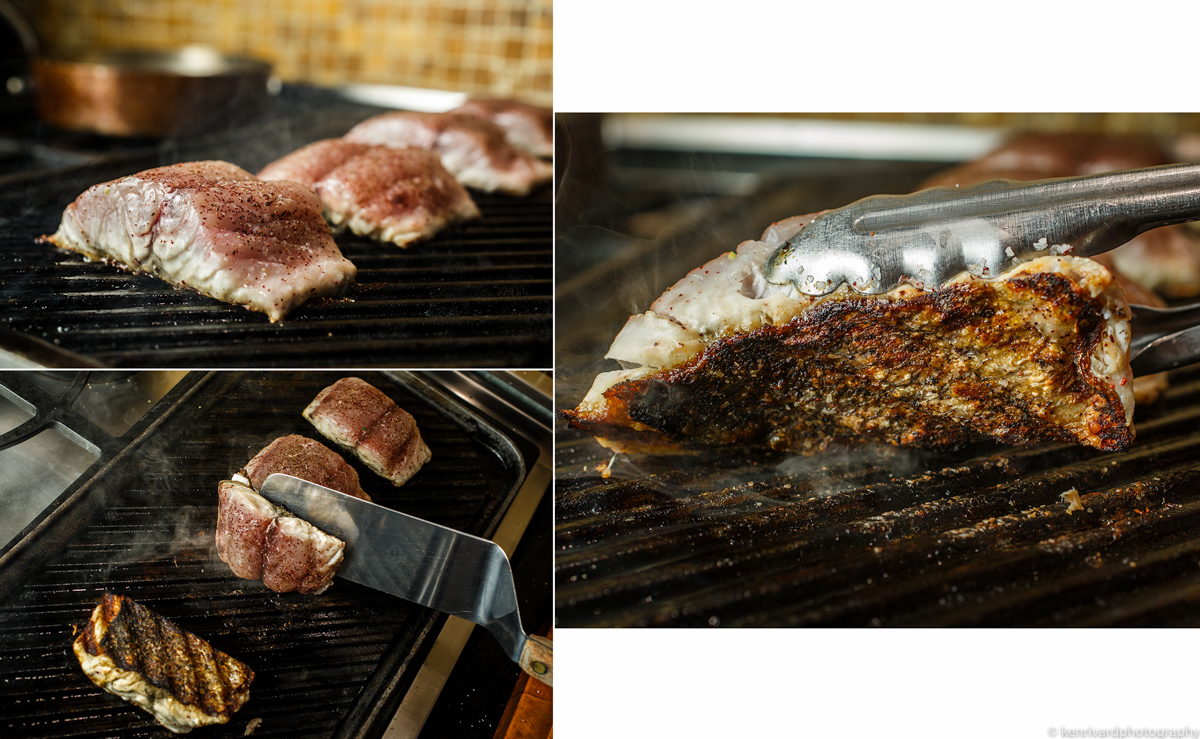 I’ve only been fishing twice and the second time I caught a bluefish.  They’re incredible fighters, even out of the water and I was glad to have someone with experience get it off the hook for me.  Ken and I are lucky enough to have several friends who fish for both bluefish and striped bass and generously share their catch.

Grilling fish is less of challenge than people imagine.  The same rules apply whether using a grill pan (as we did here) or an outdoor grill.  In either case, the grill needs to be clean, hot, and brushed with a bit of oil.  The fish should also be brushed with oil, although if the grill is clean that’s not absolutely necessary.  Ninety percent of the problem with fish sticking is caused by bringing the fish into contact with the grill before it’s hot enough to cause a sharp, immediate sear.  If you wait until the grill is quite hot, the surface of the skin will sear.  As the fish cooks, the skin will tighten up where it makes contact with the grill, and ultimately release from the metal surface.  I like to use tongs to life a corner, then a spatula to carefully lift the rest.  Brushing the top surface with a little oil before you flip the pieces will make it easier to remove the pieces when they’re completely cooked.

Sumac is tart Middle Eastern spice made from the ground dried fruit of the sumac tree.  Most people immediately recognize the flavor as a major part of the Middle Eastern za’atar spice mix.  I like it lot on fish, chicken and lamb.  These days you can find sumac in Whole Foods these days, in a Middle Eastern grocery or online.  Or you can just substitute za’atar or a little grated lemon zest.