The little piles of sesame seeds atop the prunes are the traditional way of garnishing the dish.

We’re baaaaaaacccckkkkk….  and what a relief it is.  Thank you for all of the expressions of support.   The wires are back in the walls; the holes are patched and the patches are… well, they’ll be painted soon.  Anyway, where were we?  Oh, yes, Moroccan Short Ribs of Beef with Prunes and Ras el Hanout.  Before we stumbled through an invisible portal into the Gehenna of wiring, longtime Rialto employee Mohammed Karachi and his family shared a leisurely Sunday morning with us, while Mohammed’s wife Layla walked Jody through their Moroccan family recipe for braised short ribs, using ras el hanout from Mohammed’s mother.  What a treat!  The spicy and sweet components are kept separate until just before the dish is served.  Do you want a forkful of beef with Moroccan seasoning and a bit of prune at the same time?  Or first the spicy, then the sweet?  It’s comforting either way.

Ras el hanout means “head of the shop,” and the spice blend is supposed to be the best of a vendor’s wares, or as Mohammed put it, “It’s the boss of all spices.”  Like curry in India, ras el hanout is an ubiquitous undercurrent in Moroccan cuisine.  You taste it in tagines, the country’s stews (with preserved lemons!), in bistella (b’stella, bisteeya, etc.), the iconic chicken and almond pie made with phyllo dough, in soups and vegetables.  If you’re a glutton for mortar-and-pestle punishment you can make your own–the web abounds with recipes.  However, while the common denominators are turmeric, cardamom, cloves, cinnamon, several different kinds of pepper, cumin and fenugreek, any made-in-Morocco version will likely contain at least a few selections from a raft of obscure additions like orris root, monk’s pepper, chufa (a tuber cultivated in Spain, the primary ingredient in horchata), cubebs (another kind of pepper), dried rosebuds and grains of paradise.  Even assuming I could get my hands on all this stuff, I’d still have to ask, Why bother?  Other people can do it better, and sell it to me in small, usable quantities.  Mainstream spice brands now sometimes offer their own versions of ras el hanout in supermarkets, but frankly I’m more inclined to buy it online, from a business that specializes in Middle Eastern spice combinations.  At least until Mohammed coughs up his mother’s email address.  Enjoy.  Ken

with Prunes and Ras el Hanout 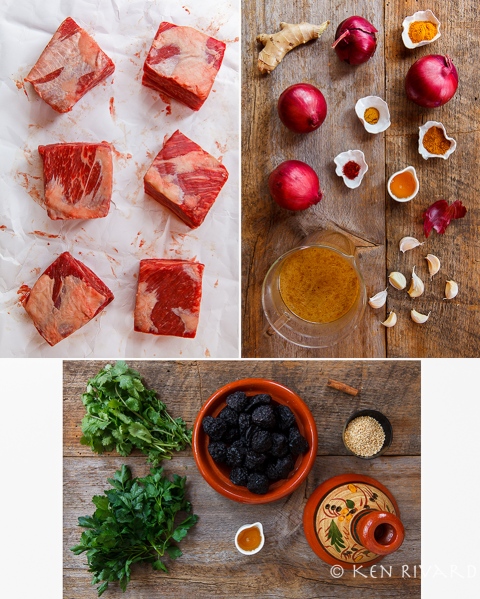 Mohammed Karachi and I have worked together for almost 20 years. In the early years, we worked side by side in the kitchen during dinner service. He was a runner, delivering trays to the dining room, while I expedited, calling out which orders to cook next to the line cooks and then loading the trays as each order became ready. Both of us had more energy than we know what to do with, so if things were slow we could both get quite silly.  Now we’re older, wiser and, for the most part, behave like adults.

When I decided to invite guests into our blog kitchen, I knew I wanted to start with Mohammed. For years I’ve listened to him describe what he cooks for his wife and daughters, and I wanted to taste some of his cooking for myself.  After several conversations, we settled on this recipe, and then he made a confession: it was really Layla’s recipe and she should cook it with me.

We had such a good time. I had made a batch of the ribs earlier in the day to ensure we would have a completed recipe since it takes so many hours to cook.  So after getting the second batch going and the prunes done, we all sat down for a late lunch, accompanied by batbout, traditional Moroccan bread that Layla had made for us. It was delicious and I was so excited when Layla told me I did a good job!

It might seem odd for a recipe that calls for ras el hanout would include additional turmeric and cinnamon, but the spice blend is used very discretely.  Like saffron, its flavor should be present, but just barely.

Beef short ribs should be fatty, but fatty in the right way.  Look for intramuscular fat, the kind that shows up as marbling in the meat, but not so much that it looks like the meat is marbling the fat.  You can see what I mean in the photos.  Likewise, make sure most of the intermuscular fat (the kind that’s on the outside) is trimmed away. 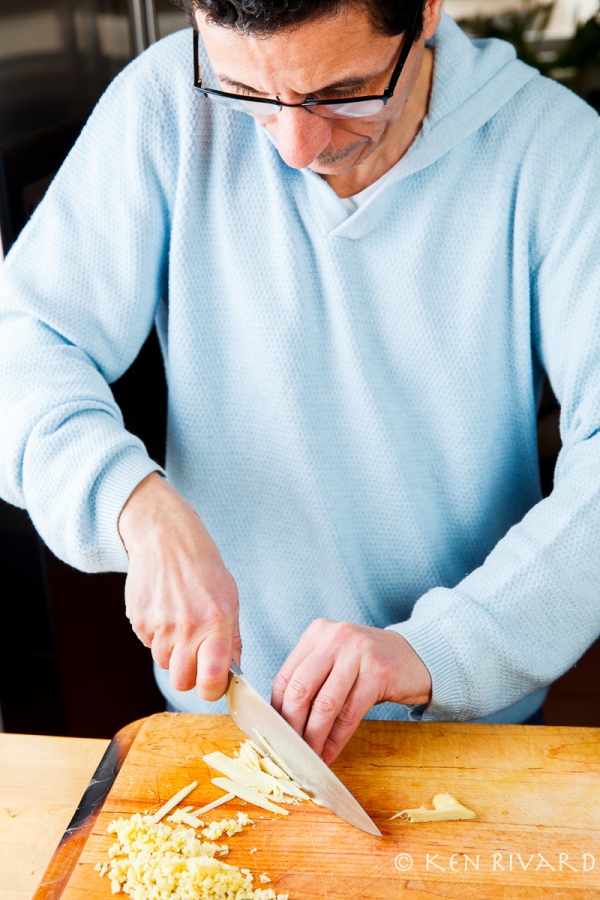 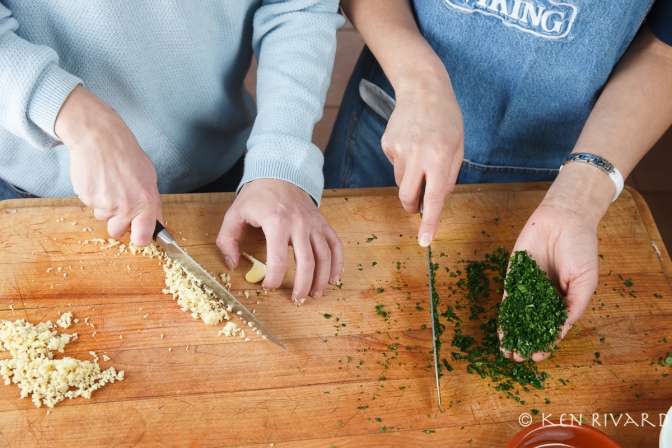 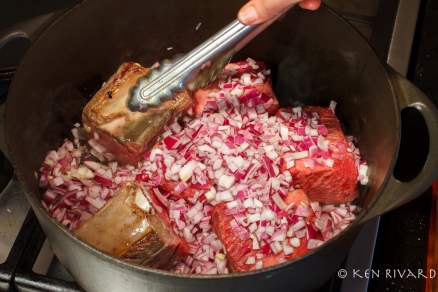 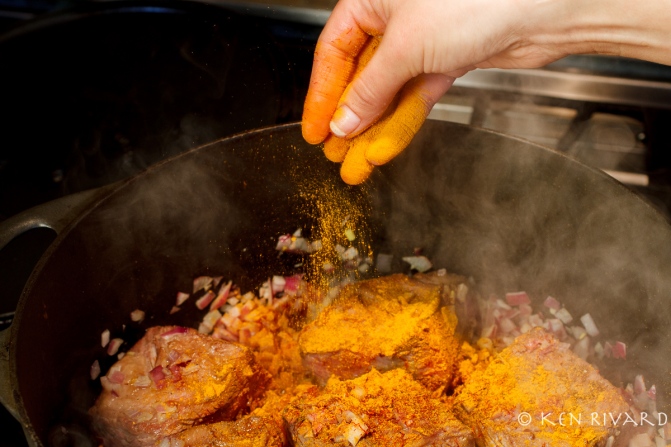 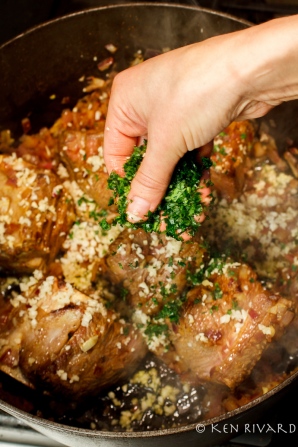 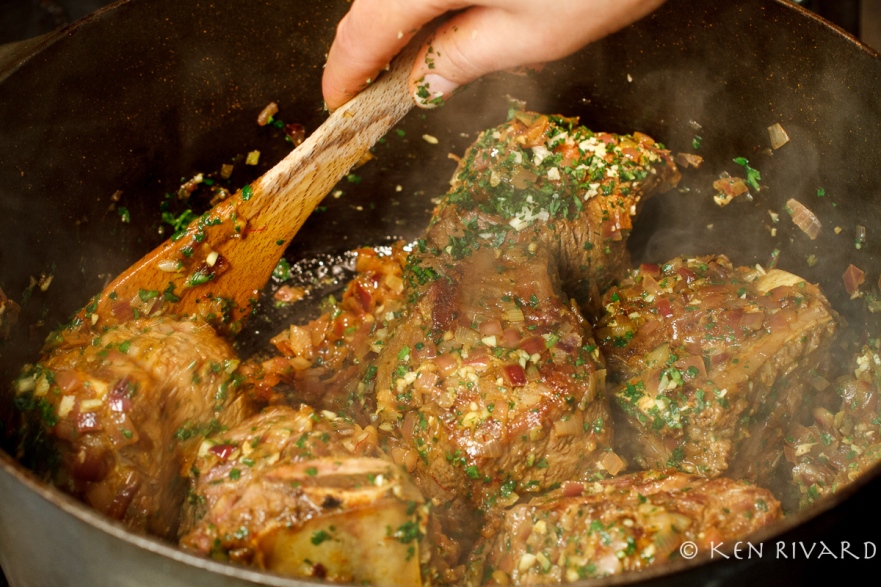 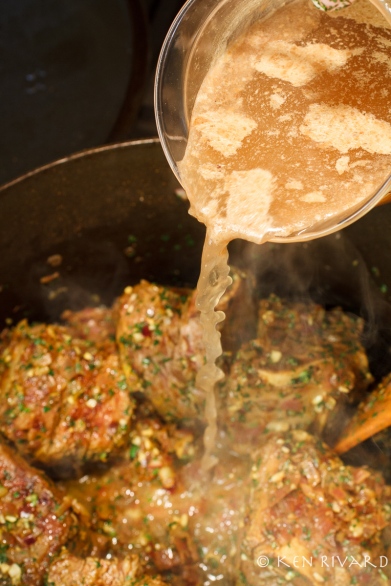 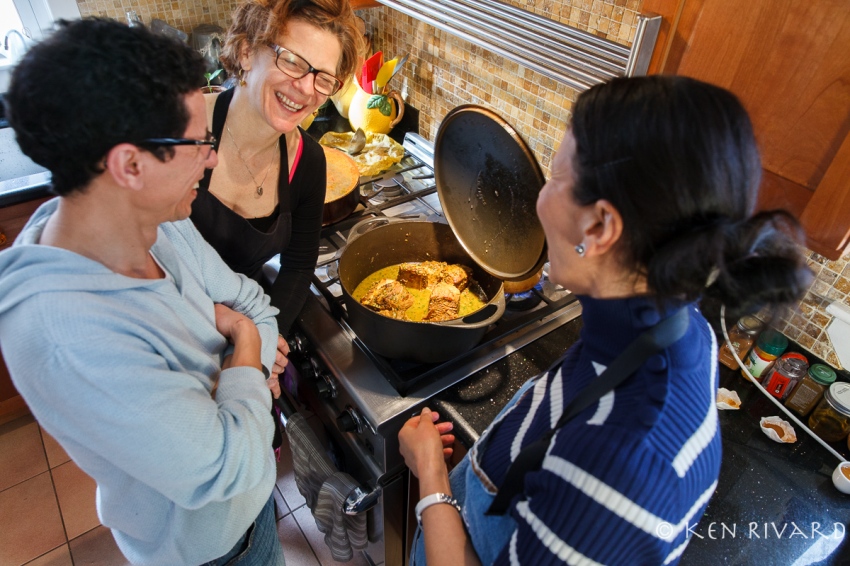 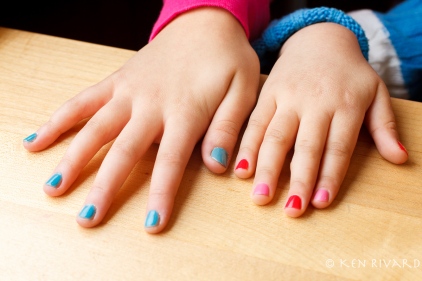 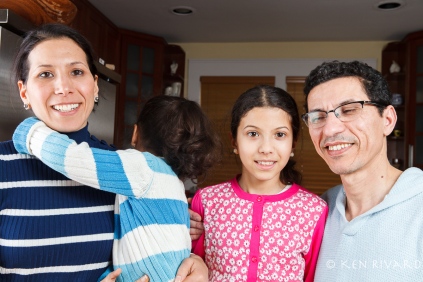 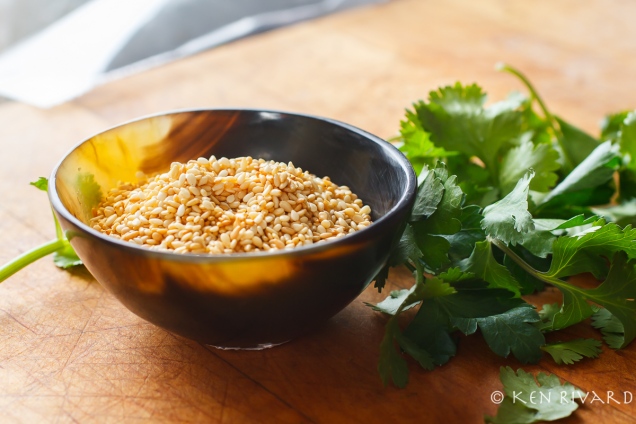