Chicken Under A Brick is a spatchcocked or butterflied bird (they mean the same thing) cooked under a weight so it remains flat and cooks evenly.  Part of the pleasure of spatchcocking is just saying it.  Repeat this sentence aloud: “Darling, we’re spatchcocking poussin tonight.”  Doesn’t that sound like heaps more fun than, “Sweetie, it’s butterflied chicken night,”?  I am not alone.   Spatchcock is one of those words that sets the hearts of etymologists aflutter, and propositions abound concerning its origins.  This much is certain: the English use spatchcock to indicate a chicken under six weeks old, the equivalent of a French poussin.  As a verb, on both sides of the Atlantic, it means to remove the backbone and  flatten the chicken, making it easier to grill or roast.  Its earliest appearance in print is in an 18th-century Irish cookbook, where it’s a recommended method of grilling poultry. But asking how the word came to be–who are its parents, aunts and uncles, distant relations–is to dive into a tangle of linguistic geneology.  One theory holds that spatchcock is a shortened form of “dispatch the cock,” with its multiple meanings of killing/prepping, and to happen quickly.   Another etymology sees it as a variation of “spitchcock,” an English technique for grilling eels on a spit (nobody can say where “spitchcock” comes from).  A particularly evocative Victorian version of the “dispatch the cock” school maintains that the word originated in the long sea voyages from England to India (posh passengers), when coops of chickens would be kept on board.  To relieve the tedium of the sea passages at sea and the monotony of a shipboard diet chickens would periodically be brought on deck and, to the amusement and anticipation of salivating passengers, partially deboned, flattened and quickly grilled.

Whatever its origins, spatchcocking chicken is simple and useful, especially if you don’t have a lot of time to cook.  All it requires is a pair of heavy-duty kitchen scissors or poultry sheers.  Follow along with the pictures in the collage below.

At this point you can apply a rub or a marinade or just some oil and seasonings and head  outside to grill.   The fickle New England weather spoiled our plans with a series of thunderstorms and a flood alert, so we improvised inside, which is where the brick comes in.  If a butterflied chicken is skewered for a spit or rotisserie, it holds its shape, and it will do so in the uniform heat of an oven as well .  But if the heat is high, and coming from one direction, as the meat cooks unevenly (first one side, then the other) it has a tendency to warp.   With some chickens this is minor, with others they’ll pull right up off the grill and flip on one side.  The solution is to weight the chicken as it cooks.  The weight presses the meat down so more of the skin comes in contact with cooking surface, the entire chicken has a more uniform thickness and cooks more evenly.

Use your imagination for cooking weights.  In our last house (with a back yard and patio outside the kitchen door, sigh…) I had a set of patio bricks wrapped in foil I used as weights for the grill.  Once, at a  summer vacation rental, we pressed a set of antique clothing irons into service–they made fantastic weights, and seared a lovely ogival arch seared into the crispy skin.  These days we tend to just grab whatever cast-iron skillets are handy.  Use parchment between the chicken and the weight so they don’t stick, and use a fresh piece when you flip the chicken over (so you don’t cross-contaminate).  Whichever method you use you’ll get an unbelievably moist chicken with crispy skin cooked quickly.  We did all of our cooking on a stovetop griddle pan, but if you don’t like your skin as charred as we did ours, sear the chicken on both sides until very crisp, then throw the bird into a roasting pan and finish it in an oven preheated to 425°.

Ah, the joys of photography.  We purchased two free-range chickens from Stillman’s Farm, spatchcocked and seasoned one, per the directions, letting it rest overnight.  The second, we spatchcocked the next day, when there was sun enough to photograph some things without a flash.  Some of you will notice that from time to time it appears that one of our chickens has lost a wing.  Indeed, it arrived missing one wing.  So our ordinarily seamless visual narrative may, from time to time, seem underwinged.  Both chickens were delicious, with unbelievable firm (not tough) texture to the meat, as though a chicken and a half had been packed into a single chicken body.  In any event, we definitely preferred the chicken that had marinated overnight.  The seasoning didn’t stop at the skin.

Chicken Under A Brick with Pan-Roasted Red Onions 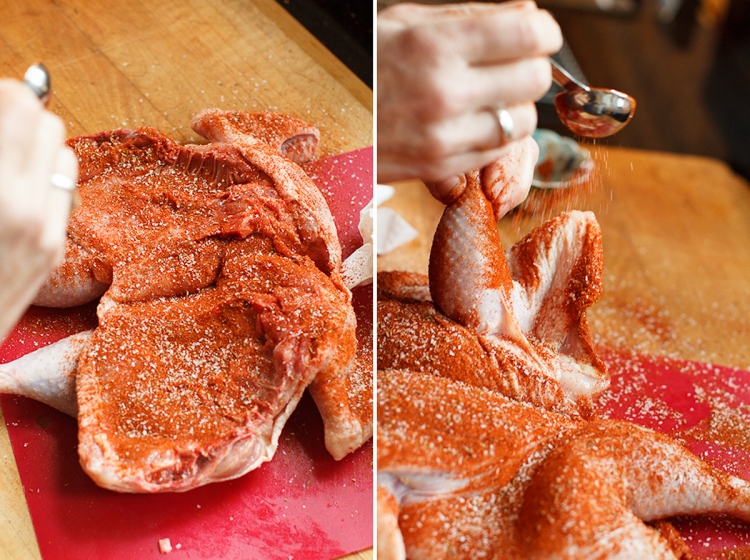 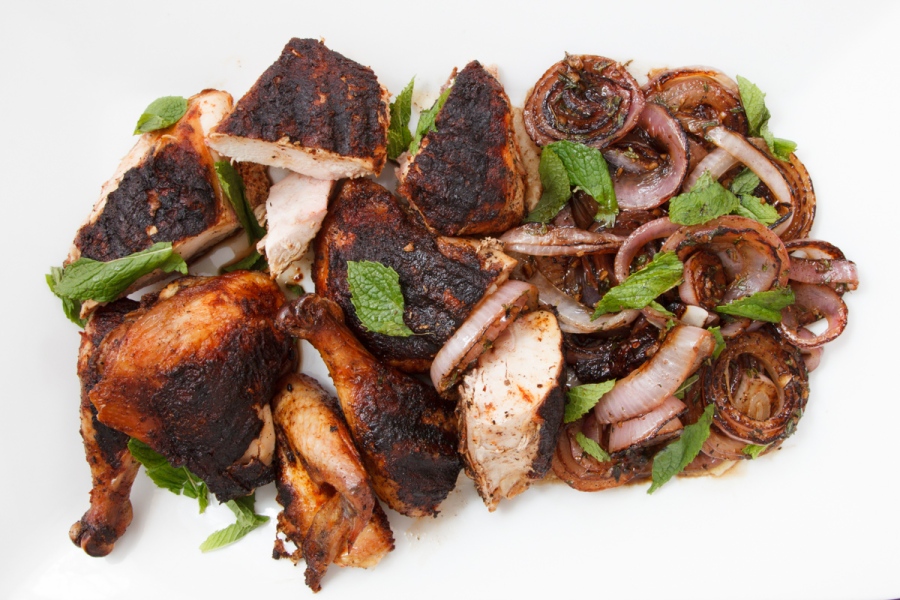 Hey all, I recommend serving this with a dollop of sour cream or Greek yogurt.  We were a little discombobulated by a change of cooking venue.  We were going to do this recipe on our outdoor grill but our very wet New England spring once again sent us inside.  In the confusion, I forgot to put the yogurt on the mis en place tray and Ken is such a stickler, he wouldn’t let me add it to the final dish.  Since this is a take on Chicken Paprikash, the creamy stuff does make sense.

This is a great way to cook a bird so both thigh-leg quarters and breast-wing quarters cook evenly.  Since there is such intense heat against the skin, a dry rub without anything sweet works best (sugar will burn).  Although it’s not imperative to marinate the chicken overnight,  the time does allow the the chicken to develop a deeper richer flavor.

Our son Oliver, home from Brooklyn for a couple of days, and considerably more capable with Photoshop than I am, helped me with the guides and instructions on the photos.  I owe him another New York meal.  Click on something to see it with a little more detail.  Left and right arrow keys will move you through the photos. 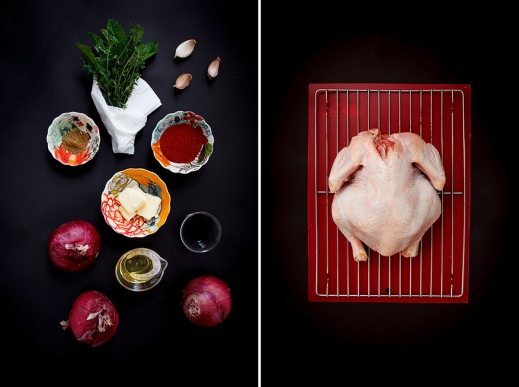 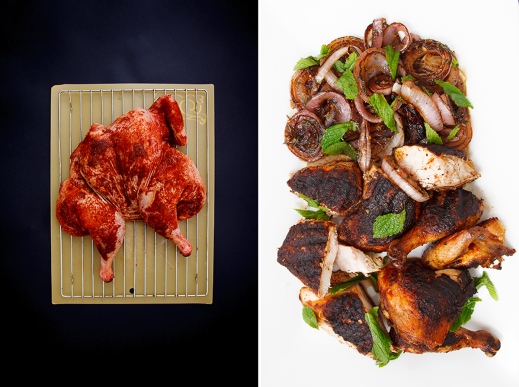 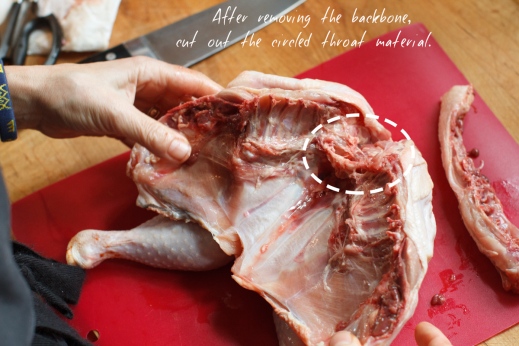 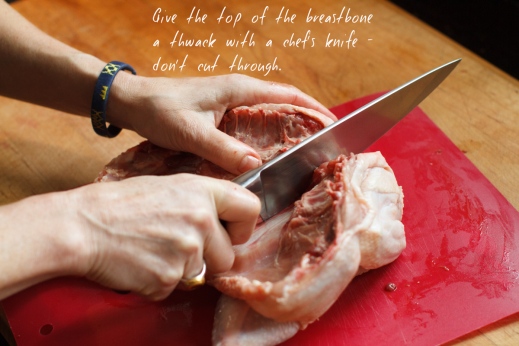 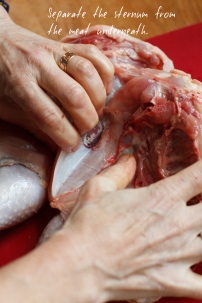 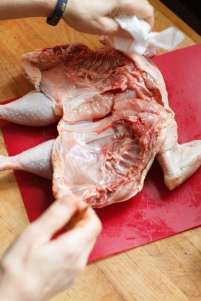 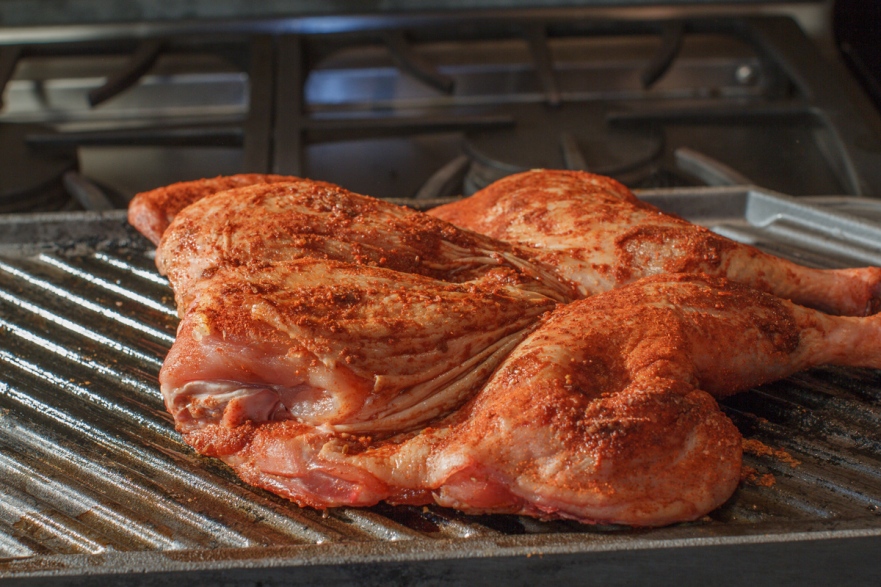 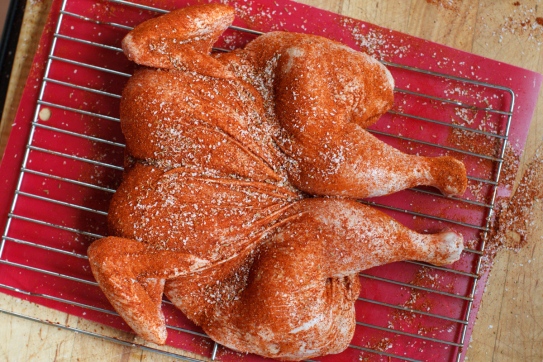 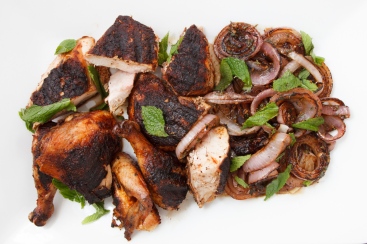