Several months ago Tal Shofman-Schejter, a former pastry chef at Rialto now living in Israel, emailed me some questions about lenses and food photography.  Last week her musician husband passed through Boston and dropped off a thank-you basket of Israeli goodies.   And that’s how we ended up with this week’s dish, baked Israeli Coucous with Red Snapper and Preserved Lemon.

Israelis couscous, sometimes called “giant couscous,” is often mistaken for fregola, a different bb-sized pasta from Sardinia.  Although they appear similar, and are sometimes used interchangeably outside of Sardinia and Israel, poke below the surface and the likeness disappears.  Fregola almost certainly made the jump to Sardinia from North African Berber culture, the birthplace of couscous, and has been around for hundreds of years.  Israeli couscous was born in the middle of the last century, during a period of austerity shortly after the founding of the state of Israel, when Israel’s first prime minister David Ben Gurion asked Israeli food manufacturers to come up with a wheat-based product that could be used by Mizrahi immigrants in place of the rice, one of their dietary staples.  Although the first Israeli coucous resembled rice grains, it soon morphed into the bb-shape it has today.

Fregola is still an artisanal product made by rolling semolina grains between moistened palms until they form little balls.  Israeli couscous is extruded, which probably accounts for their difference in price.  Last of all, fregola is toasted, producing a rich, complex and–dare I say it?–adult flavor, while Israeli couscous is usually untoasted.  As Tal explained to me in an email, despite its culinary hipness elsewhere, in Israel the homegrown product is perceived primarily as children’s food.  Would you toast Mueller’s elbows before making macaroni and cheese?

This week’s recipe is based on a traditional Sardinian dish of fregola with tomato sauce and clams. We thought it might be fun to try the same thing with red snapper.  Sun-dried tomatoes and two kinds of paprika lend the dish a rich, smoky flavor (and a deep red color).   To dispel any reservation concerning the complexity deficit, Jody also toasts the couscous.  Whether you choose to toast or not, the dish is, without a doubt, comfort food.  Enjoy.  Ken

CIGUATERA NOTE: Since our original publication of this post several readers have contacted us to express their concern regarding ciguatera, seafood-toxin poisoning caused by the consumption of predatory reef fish such as mahi-mahi, grouper and red snapper.  Ciguatera is estimated to be the most widely recurring source of seafood toxin poisoning in the world, although it is relatively rare in the continental United States, with the exception of Florida.  I am currently at work on a post explaining ciguatera in detail and the circumstances under which one ought to take care when eating reef fish.  The Centers for Disease Control, which monitors illnesses, and the Food and Drug Administration, which sets regulations for the handling and processing of seafood, take different, not entirely complimentary approaches to ciguatera.  I discuss them in my post.  When I finish, I’ll link the piece to this note.  For the moment, I would not recommend eating any predatory reef fish in Florida unless you know and trust the source of the fish, meaning that you believe a restaurant or retail seafood vendor only sources seafood from a HACCP certified wholesaler.  The likelihood of any fish carrying ciguatoxin varies according to species, geographic location, and size.  Barracuda, for example, the source of a 2010 New York outbreak of ciguatera, have proven to be such a regular carrier of ciguatoxin that it should probably never be eaten anywhere.  The Center for Disease Control currently recommends that in warm water source areas (e.g. Dominican Republic, Haiti, Virgin Islands) visitors consume no predatory reef fish at all.   Although I personally believe that reef fish sold in my region of the country, New England, is safe, everyone should make up his or her own mind regarding the consumption of mahi-mahi, grouper, red snapper and other predatory reef fish.  Ken

Izhar, husband of my good friend and former Rialto pastry chef Tal Schetjer, arrived at the Rialto doorstep last week with a bag of treats–Israeli couscous or ptitim, a big box of Medjoul dates, and  date-honey syrup that I haven’t tried yet.  He’s a musician who used to teach at Berekley School of Music and is touring and performing around the country.  They now lives in Israel with their girls.  Tal is a talented pastry chef with a huge warm heart.  I’m delighted that they have remained in our lives from the other side of the world.

I only used half the onion shown in the picture since it was so big, and in the end I added more olives to the recipe–I thought it needed it.   I added more olives.  As you can see in the photos, I put the pepper puree directly on the couscous and then added the stock rather than mixing the puree and stock together as I recommend in the recipe before pouring them over the couscous.  I was using a homemade fish stock and I wanted to make sure no stray pieces of fish bone made it into the couscous.  The advantage of doing it the way I suggest (and not as I do) is that it doesn’t splatter all over the place as you try to stir it evenly into the couscous.

Click on something to see it with a little more detail.  Left and right arrow keys will move you through the photos. 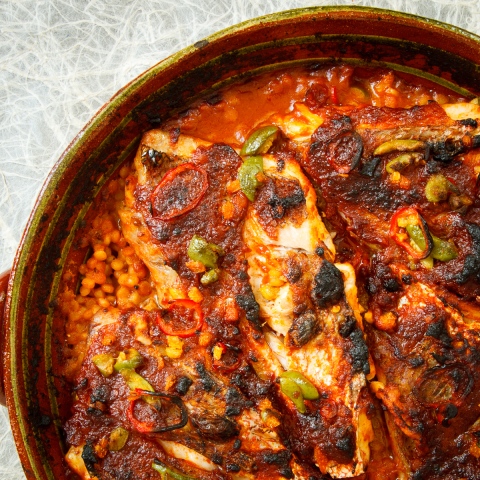 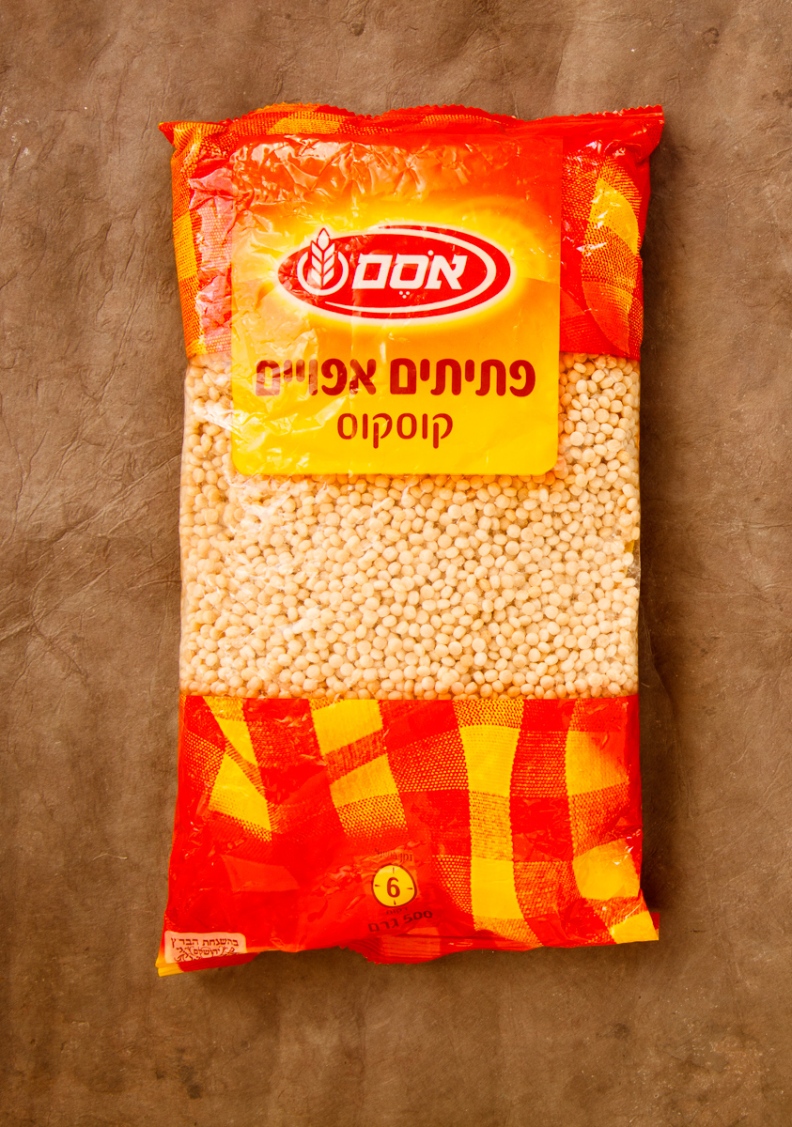 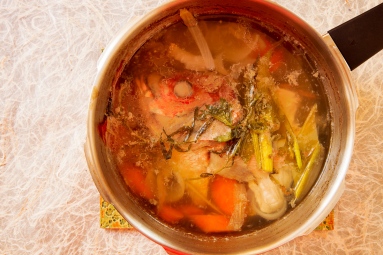 Of course, Jody had to make her own fish stock. 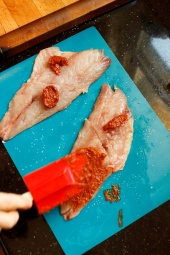 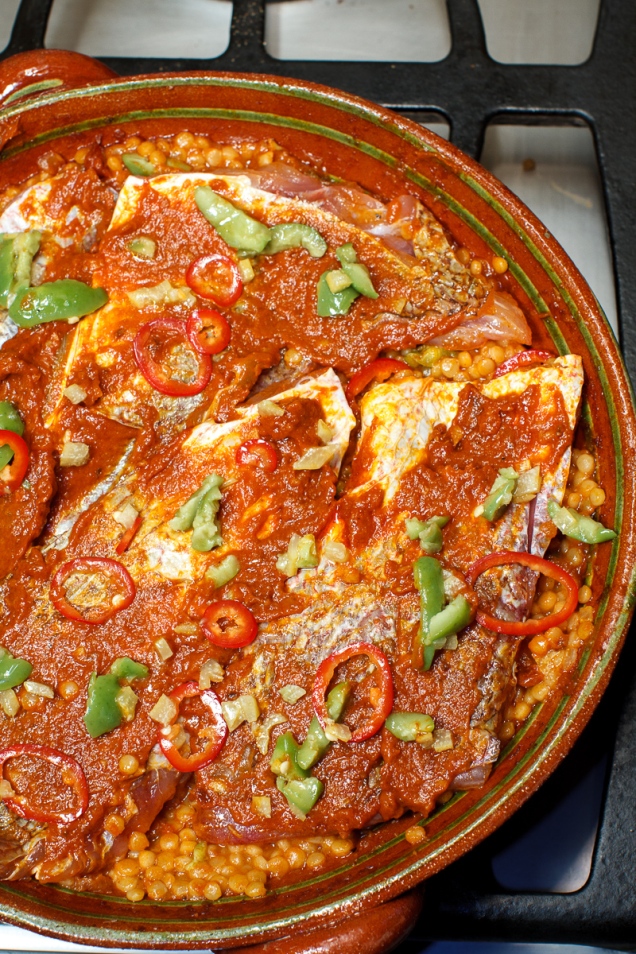 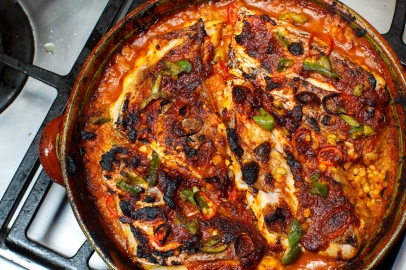 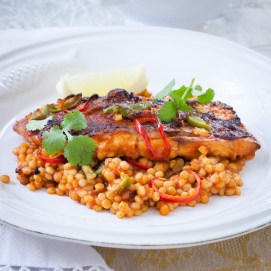