Making individual pasta shapes like cavatelli or orecchiette is nothing like rolling out noodles.  The former is so gleeful, so hilariously liberating, that I can only compare it to being a little kid running naked down the street hollering, “Look at me!  Look at me!”  It’s just that great.  Er… what?  You never ran outside naked as a kid?  Really?  Never?  Well, sounds to me like somebody’s got some serious catching up to do.  No, don’t take your clothes off–we’re all adults now–the naked-in-the-street developmental train left the station some time ago.  But that’s okay–you can still make Cavatelli with Tomato-Eggplant Sauce.  You probably don’t believe me now, but if you share the joy and invite a friend with a bottle of wine to help hilarity will ensue.  Everyone’s first dozen cavatelli are just that funny.  Yours, mine, everyone’s.  Don’t throw them away–they deserve to be eaten–and you’ll get better so fast you’ll need them as a reminder of what a beginner you used to be.

Jody and I have talked in the past about la cucina povera, or the “cooking of the poor,” sometimes referred to as peasant food.  In Puglia, peasants were allowed to glean the harvested wheat fields of aristocratic land-owners; that is, they were permitted to scavenge for fallen grains.  But here’s the catch: they could only glean after the post-harvest stubble had been burned to prep the field for the next season.  A fair share of whatever leftover grains survived the fire were charred.  Not that you’re bothered by that–you’re hungry, remember.  And milling charred grains into flour, what the Puglians call farina arsa, (“burnt wheat” or “burnt flour”) beats starving by a country mile.  The kicker is, pasta made with a bit of burnt flour tastes great.  Although the color of burnt wheat cavatelli resembles that of whole wheat pasta, they taste quite different.  Cavatelli made with farina arsa have a chewy texture and a deep, toasty flavor that stands up to strong ingredients (we’re already thinking about making burnt wheat cavatelli again with a sauce using duck meat).

Puglian pasta made with farina arsa is not widely known, even in Italy.  You can buy farina arsa orecchiette online, but hey, wouldn’t that take all the fun out of it?*  Cavatelli, in our opinion, are easier to make to make than orecchiette.  Perfect cavatelli are hard, but perfect anything is hard.  And I guarantee your own speed and consistency will improve quickly.  Here are a couple of tips.  First, make sure the dough is kneaded until it’s smooth and elastic. If it’s sticky, add a little more floor.  The second tip involves the technique for making cavatelli.  In brief, you press down on a bit of dough with the blade of a knife and then draw the knife toward you as though you were trying to “smear” across the cutting board.  The trick is to keep the blade of the knife close enough to the surface so that a curl of dough climbs up over the far edge of the blade, but not so close that you really do smear it across the cutting board.  Beginners are typically afraid of the latter, so they don’t press down hard enough on the dough.  The result is a very thick curl of dough, and thick cavatelli.  Aim for a thin curl of pasta over the the edge of the knife.

Don’t worry if this doesn’t mean anything to you – all will become clear once you give things a try.  I’ve included two sets of photographs: one showing cavatelli being rolled a bit thicker than you want, and then a few others–after you’re steaming along–with a thinner curl.  Ideally you’d like the curls of the opposite edges of the shape to meet in a line down the center, but if yours overlap, it’s not a big deal.  You’re still going to get that little-kid-running down-the-street effect, I promise.

The tomato-eggplant sauce is a classic Puglian accompaniment to the sturdy, toasty flavor of the cavatelli, reflecting what you’re likely to find easily and cheaply in the market.  Make the sauce first, then the cavatelli.  You can even make the sauce the day or two before (hold off on sautéing the eggplant until the day of serving – while the pasta dough is resting is a good time).  Good luck.  Enjoy.  Ken

*Making orecchiette is even more hilarious than making cavatelli, but it’s also a bit trickier unless you’ve got someone standing next to you to show you how it’s properly done.  Nevertheless, if you’re itching to try, there are lots of online videos.  Just Google “How to make orecchiette.”  Let me know how it goes, heh-heh.

Makes about 1¼ pounds of fresh pasta, enough for 4 main-course servings.

*If you’re preparing the sauce a day or two ahead of time, wait to cook the eggplant until the dough is resting. 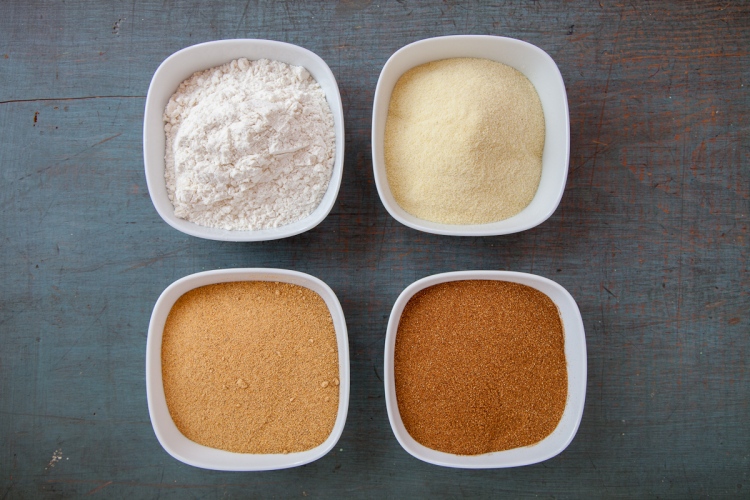 The top two are regular flour and semolina.  The botton two are toasted semolina – the one on the left in the oven; the one on the right in a heavy-bottomed sauté pan atop the stove. 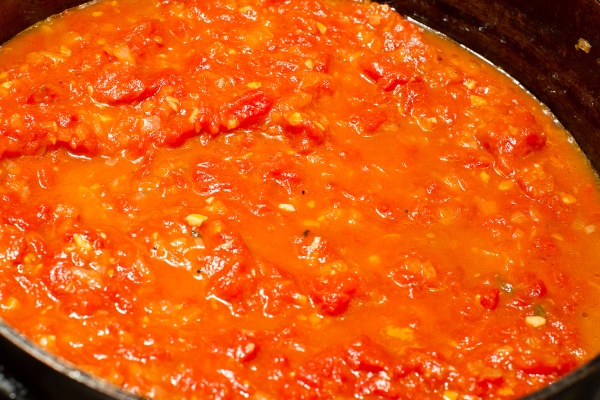 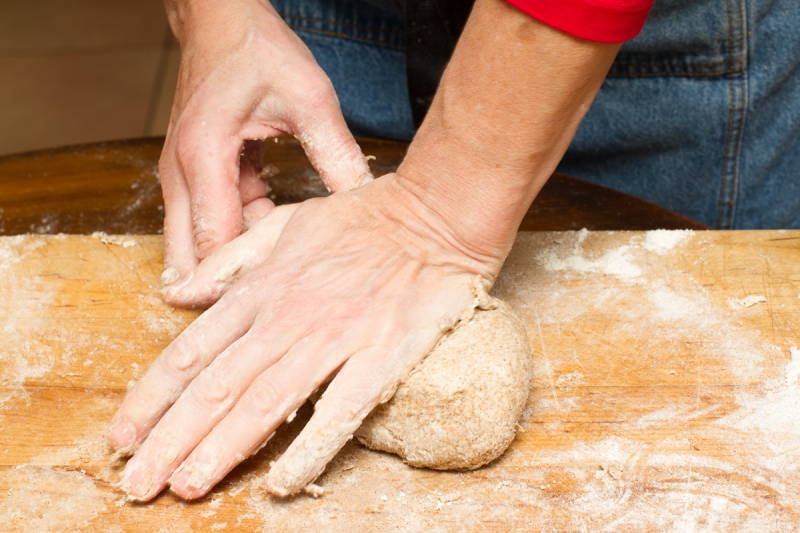 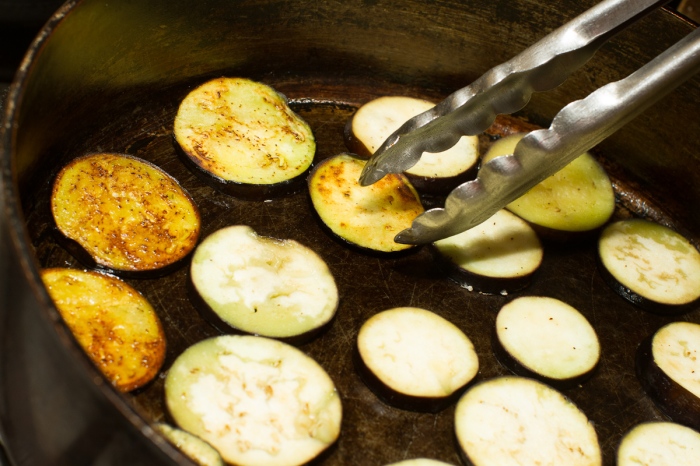 A little thick, but you get the idea. 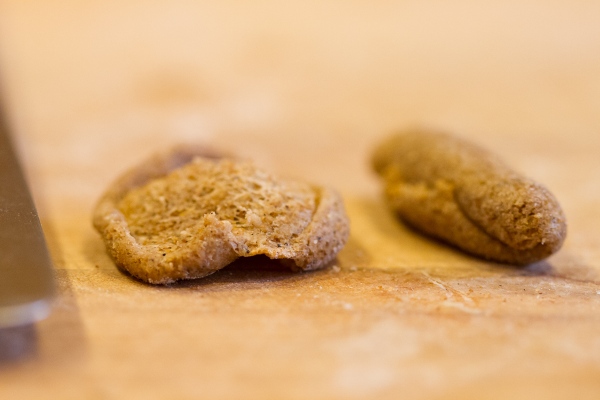 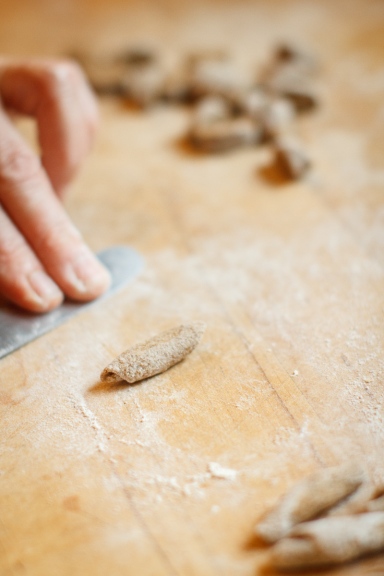 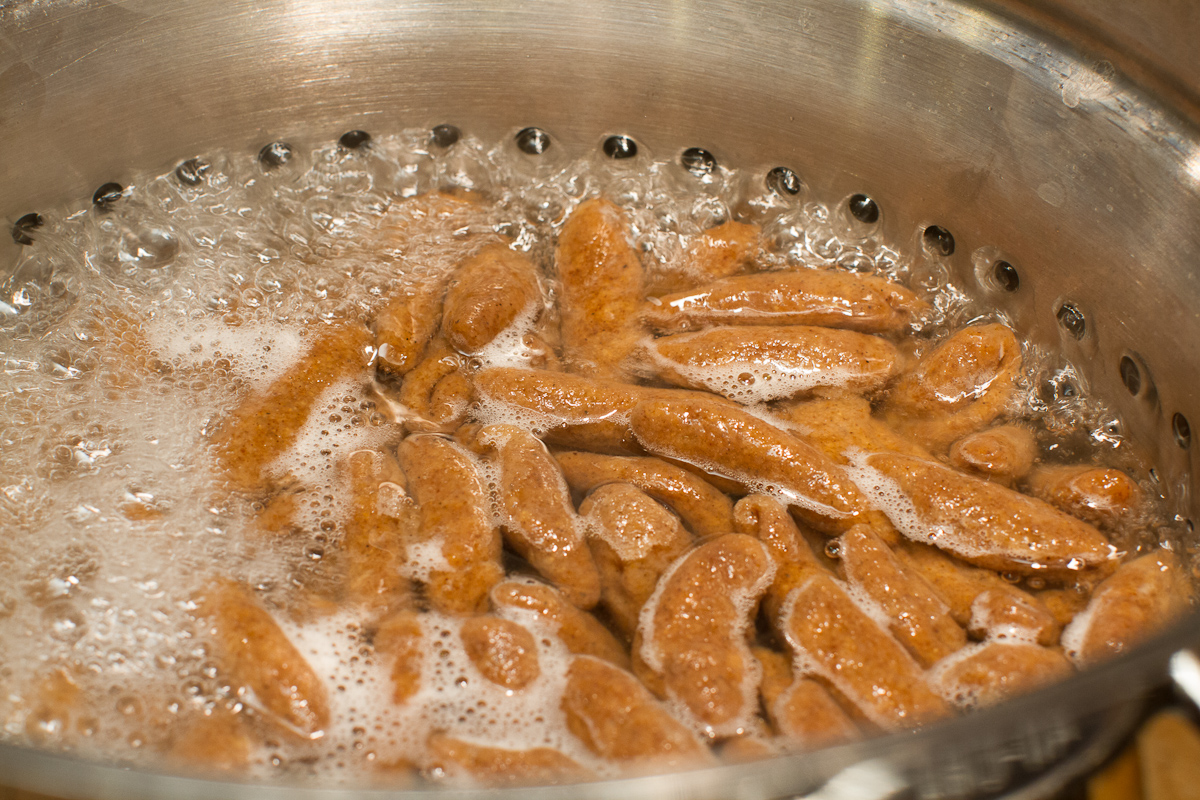 PUGLIAN CHEF ROCCO* SEZ: Use the handle of a wooden spoon to stir the cavatelli until the water comes back to a boil.  You’ll keep individual cavatelli separate from one another, with less chance of breaking any. 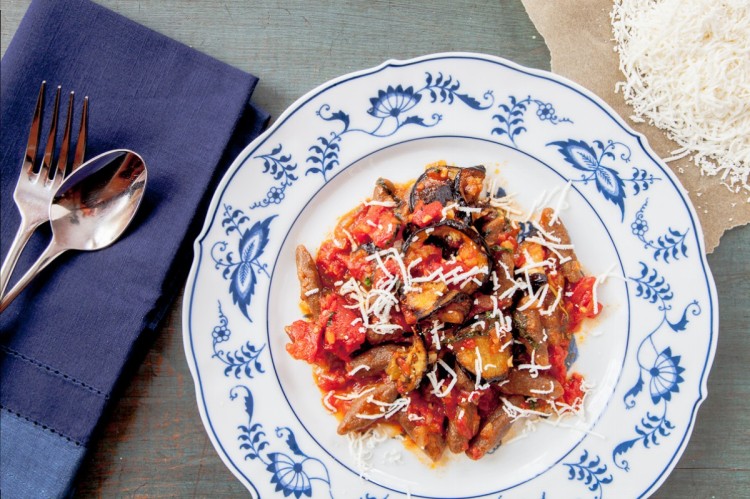 There’s always something new and  trendy in the cooking world, but for me learning an ancient technique or finding an unfamiliar ingredient is the still the greatest thrill.  In Puglia, I discovered burnt wheat flour.   We didn’t make cavatelli with this flour, but we did taste burnt what pasta pasta made with it in a restaurant and I was intrigued with its rich earthly flavor.  I’d toasted pasta many times for the Spanish dish Fideus, but the flavor of burnt wheat pasta was more complex.  I had to try making it.

I anticipated that toasting semolina flour would have an impact on its gluten–and I was right.  The dough was brittle, even after considerable kneading.   I added more all-purpose flour to the recipe, a lot more.  But what I gained in ease of working with the dough I lost in flavor.  The third time was a compromise between the two versions–it formed a pliable dough (with LOTS of kneading), but the gluten did develop.  As you can see by Ken’s pictures, I kneaded the dough by hand.  I wanted to feel it through every step of the process, but I suggest you do what I’ll do in the future–that is, go directly to the standing mixer.  Unless of course you have some issues you need to work out.

Is it worth toasting the flour?  Absolutely–it tastes like no other pasta.  And if you ask me the same question about whether hand-made cavatelli are worth the effort, I’d answer just as strongly.  They have an amazing texture and, as Ken suggests above, they’re a ton of fun.

FYI, if you don’t have semolina, use all-purpose flour and toast just part of it. 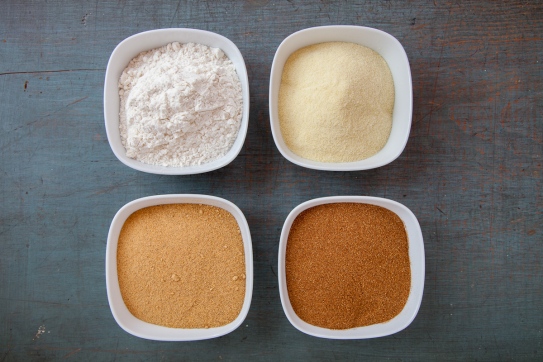 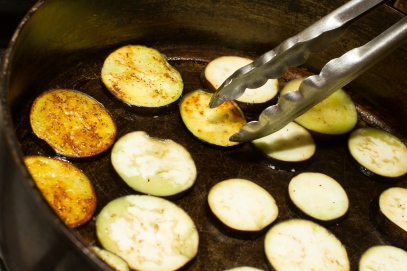 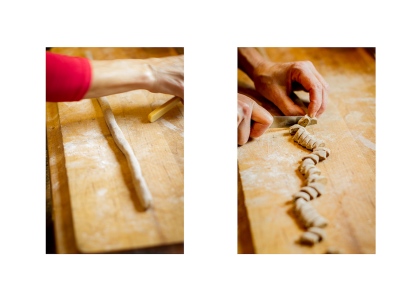 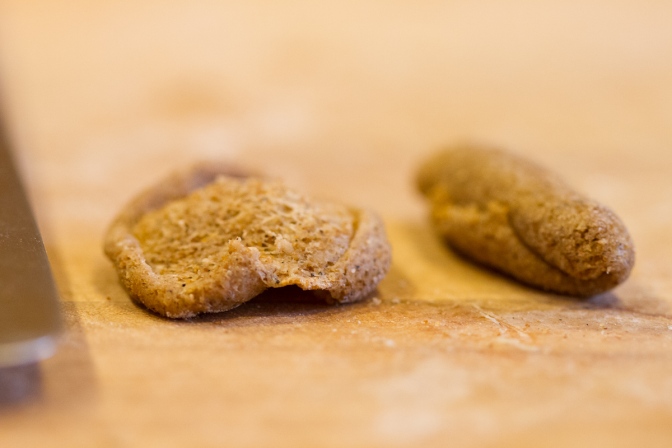 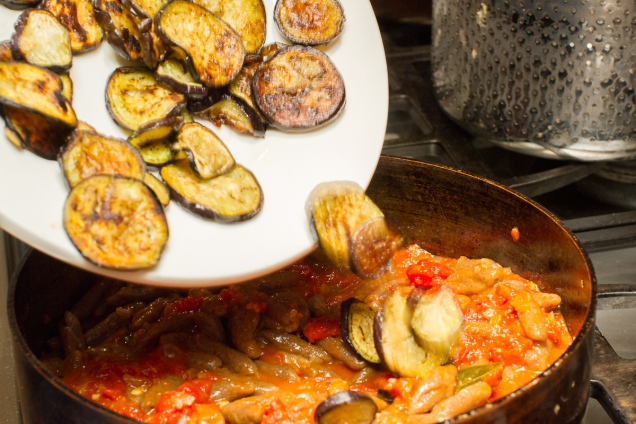 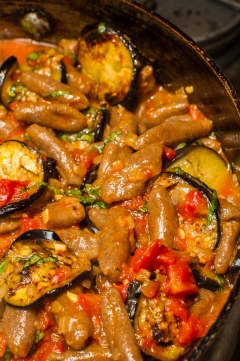 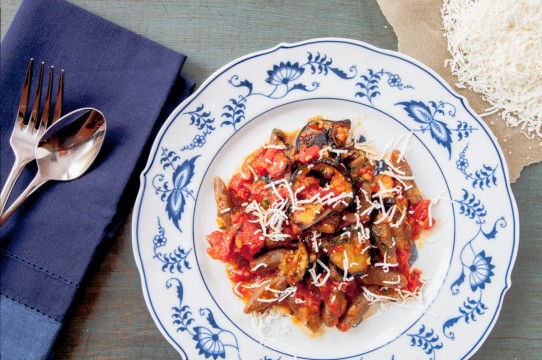 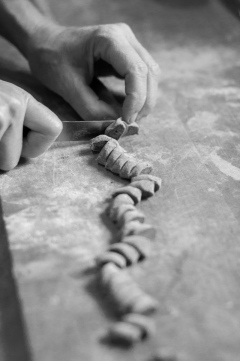