Pickled Eggs 3 Ways is the final and most colorful installment in our recent trilogy of egg recipes.  We made two batches of each of these eggs, a week apart, both to test the recipes and so I could photograph the process from pickling juice to finished eggs.  As I write this the first batch of three dozen eggs is nearly gone–in case you’re wondering if kids will eat pickled eggs,  the answer is Yes, they will.  These eggs are tart, but not completely sour (note the sugar in the recipes), which makes them a flexible dining companion.  Of course pickled eggs are the ultimate picnic food–festive, not prone to spoilage, and given to pairing nicely with other preserved items like cheese, smoked fish–and great beer.  They stand out with mixed greens–and when combined with with wasabi mayonnaise make a killer egg salad

lethal bacteria that cause food to spoil.  One method immerses the food in a ready-made solution, such as vinegar and water, whose PH is too acidic for harmful bateria to thrive.  Another brines the food in a saline solution that initiates fermentation as it draws moisture out of the food (e.g. kimchee, sauerkraut).  During fermentation good bacteria chow down on local sugars, depriving dangerous bateria of their food source.  If that weren’t enough, the good bacteria also produce lactic acid, which again shifts the PH into the danger zone for harmful microbes.

In the case of pickled eggs, we’re cooking the eggs, then using the acidic vinegar solution to flavor and preserve them.  The eggs take on a sweet-tart flavor, but they don’t ferment.  Like a religious aunt, they  do grow more tart over time, but based on personal experience they seem to reach a certain point of tartness, then stop.  Start tasting them after two days.  As for shelf life, I don’t see why they wouldn’t last for at least several months, but we’ve never come close to having any around for that long.

The most foolproof way I know of hard-boiling and then peeling eggs is to put them into a pot in a single layer, cover them with cold water by several inches and set them over high heat.  As soon as the water starts to boil, turn the heat off, cover the pot and let them sit for 15 minutes.  Transfer the pot to the sink, pour off the hot water and run cold water into the pot.  Add ice if it’s convenient.  Take each egg in turn and keeping it immersed gently bang the big end against the side of the pot so the shell cracks, then pinch off a bit of the bottom shell.  Allow the eggs to remain immersed for another ten minutes, then peel.  If you’re lucky, water will have worked its way between the membrane and the surface of the egg and the shells will come off easier than they might otherwise.  The yolks should be a rich creamy yellow, but cooked, without any of the nasty greening of the yolk.

If you make pickled eggs this weekend you can serve them at a Fourth of July picnic.  You can also remind everyone that America is named after Amerigo Vespucci.  When the adolescent eye-rolling ceases, you can go on to observe that while we know him today as an intrepid explorer, in his first, less-exalted career, he helped Christopher Columbus make sure that his men never suffered from scurvy.  Was he a doctor? you ask.

Nope.  He was Columbus’s pickle merchant. 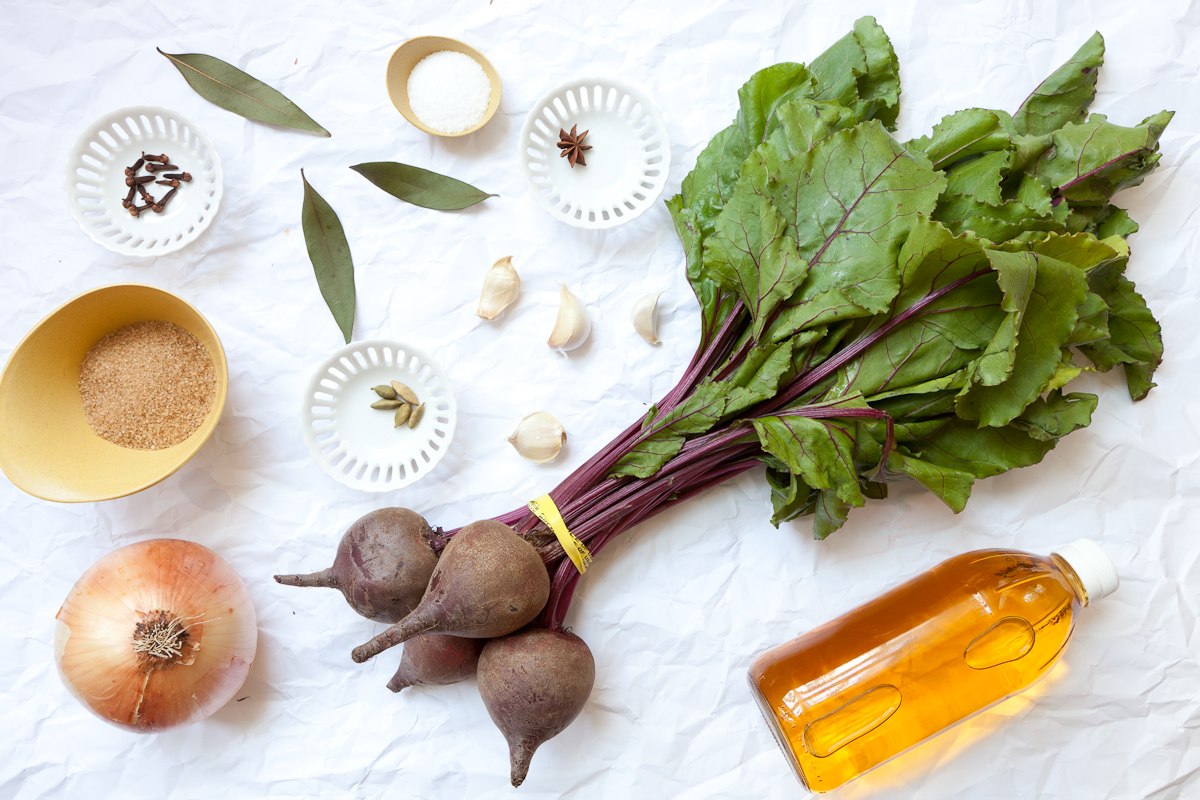 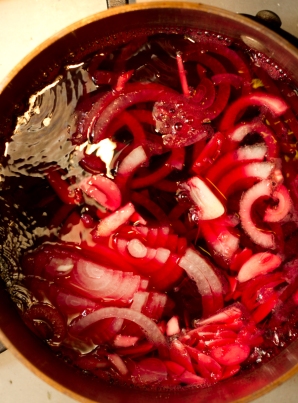 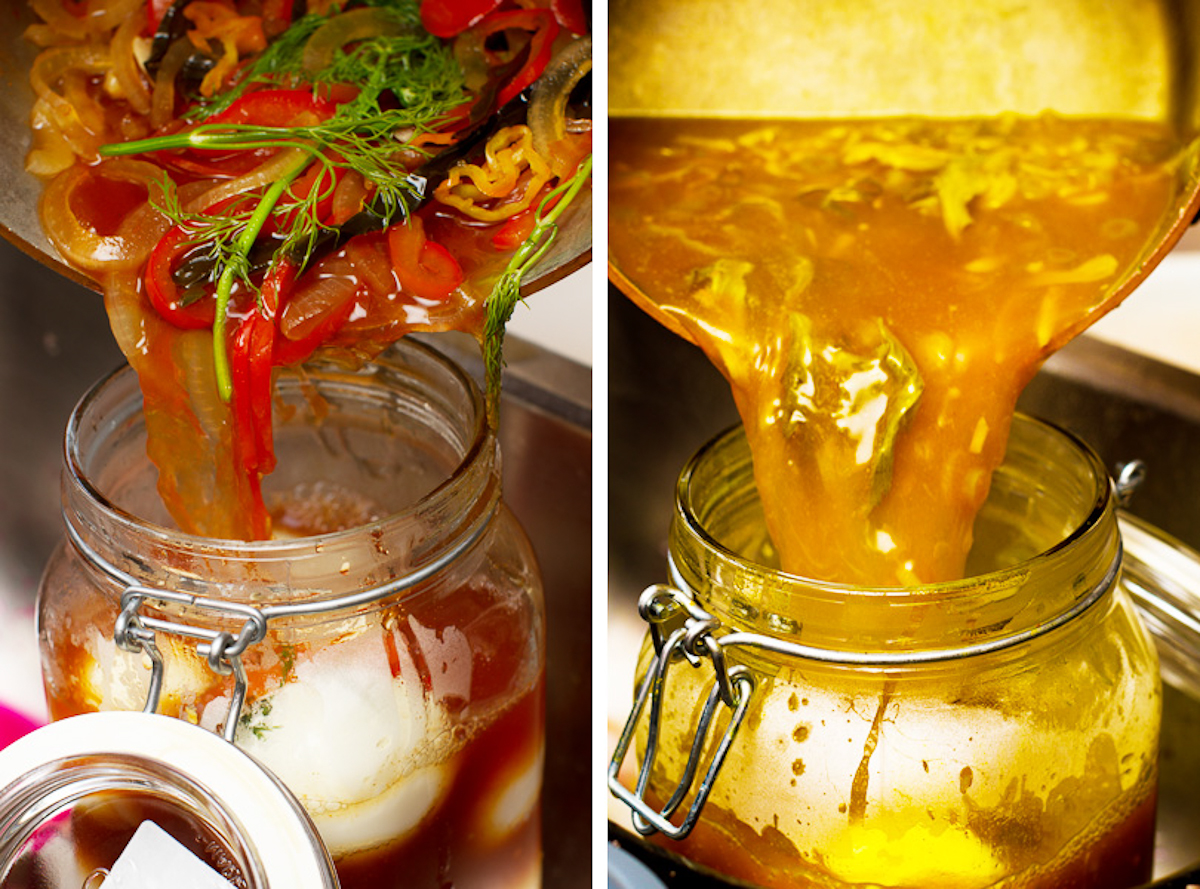 Pickled eggs in the summer is a no-brainer in theory, but I always hesitate.  All that peeling can seem monumental if you bump up against recalcitrant eggs.  The shells stick because the eggs are so fresh, they haven’t pulled away from the shell.  The technique described by Ken makes it easier, but sometimes they’re just stubborn.  It’s best to just to let go  and enjoy the mottled surfaces you may end up with.  I try to remember how lucky we are to have fresh farm eggs from free range chickens.

With both kids home from school there are a lot of opinions in the air about topics for the blog.  One really hot morning a couple of weeks ago we were all crammed into our small kitchen.  I was poaching chicken, Ken was behind the camera, and Oliver and Roxanne were making fun of each other, and us.  “We want pickled eggs!” they cried.  It made sense.  Cold food would be instantly available in the fridge for days on end.  The following week I made pickled eggs twice–a test run, then a second batch on blog day.  The end result was 6 dozen pickled eggs.  As of this morning, barely a week later, I think we’re down to 3 dozen.

Recipes for pickled eggs vary wildly.  Instead of riffing on a common formula, each recipe is a world unto itself.  Some call for vinegar; some for vinegar and water, and of course the latter disagree on the ratio of vinegar to water.  Salt and sugar are equally no-standard.  One recipe called for  3 times the amount of sugar I use here.  In order to keep the vinegar, water, sugar, salt ratios in the three recipes consistent I used 1½ cups of water in the beet and pepper recipes and only 1 cup in the curry.  The latter cooks for a shorter period, and less water evaporates.

I also don’t understand why some cooks strained off all the solids used in making the pickle juice.  What a waste!  I like the visual element the beets, dill, pepper and ginger slices bring to the pickling jars, and the flavors they add to a salad.

Think of pickled eggs as pre-seasoned hard-boiled eggs rather than pickles.  They’re beautiful on an antipasto spread, on a salad or in a sandwich.  My favorite is the one I’d never done before, the smoked chili eggs.  They aren’t the most colorful, but their flavor is fabulous.  The smoked paprika penetrates the eggs and I love how spicy they are. Once you’ve made a dozen–or two or three or six–they’re waiting for you every time you open the fridge.  And you get to use that groovy egg slicer someone gave you.