It’s killing me not to title this post I want a lover with a slow lamb…  But that wouldn’t reflect the drama, the intrigue, the sheer fingernail-gnawing suspense in this week’s contest of titans.  Tradition versus convenience.  8-Hour Lamb with Apricots and Green Olives.  In a covered roasting pan in the oven.  And in a slow-cooker.  Two lamb shoulders, two methods.  Hold on to your hat.

Inspiration?  Last April while visiting our son Oliver in Paris I declined an opportunity to eat at L’Atelier Joël Robuchon.  Oliver and I, along with our good friend and host Amy were wandering about in search of a place to dine.  In that most desperate of all Parisian circumstances, on foot at the end of the afternoon and without a reservation, we found ourselves suddenly standing before the door of the Chef Robuchon’s eponymous eatery.  We all looked at another.  Pourquoi pas?  Hélas! the hostess said with exaggerated regret, they could only admit two of us, if we were willing to eat in half an hour, at 6:30.  The remaining member of our party was welcome to dine at 8:30, when they had another opening–for one.

Amy volunteered to fall on her culinary sword and dine on leftovers back at her apartment, but I refused her offer.  We’d find someplace else where all three of us could eat, together.  And we did, a family hole-in-the-wall which had proven itself honorable to Amy in the past.  The special of the day was 8-Hour Lamb with Prunes, a fabled dish I’d never had a chance to order before.  True to the stout patron’s description, it was so tender I could have consumed the entire dish with a spoon.

Jody and I started out with the idea of just doing a slow-cooker version of the dish, but then we reconsidered.  Was there a more ideal opportunity to compare and contrast a traditional braise in the oven with the effectiveness of the slow-cooker?  So we made the same recipe both ways–8 hours in the oven (covered in parchment and foil), 8 hours in the crock pot on low.  Both were good, but different in a couple of pronounced ways, due mostly to the drier environment of the oven.

If you look closely at the photo of the vegetables in the roasting pan (the oven method) you’ll see a nice caramelized crust on them.  By contrast, the vegetables in the slow-cooker stewed and emerged a bit softer.  The lamb in the slow-cooker was juicier than that from the oven, but lacked the oven lamb’s exterior crispy bits (we love crispy bits).  The solution was to take the vegetables and lamb from the slow cooker and run them under the broiler to crisp things up a bit. We’d eat either version again in a heartbeat. Slow-cooker clean-up was a breeze, although there was that extra sheet pan we for the brief broiling.

This probably goes without saying, but the slow-cooker version rivaled the oven lamb because we took the time to sear the lamb and sauté the vegetables, just we did with the oven version, before adding everything to the cooker.  I like using the slow-cooker, especially when I’m out for the day and uncertain about the exact time of my return.  I know that after the cooking time ends the cooker will simply hold the meal on warm.

One final caveat.  I sometimes make the next day’s meal in a slow-cooker the night before.  By now, everyone in our house is accustomed to waking at 4 in the morning and wondering, What is that incredible smell?   Just a word to the wise.  Ken 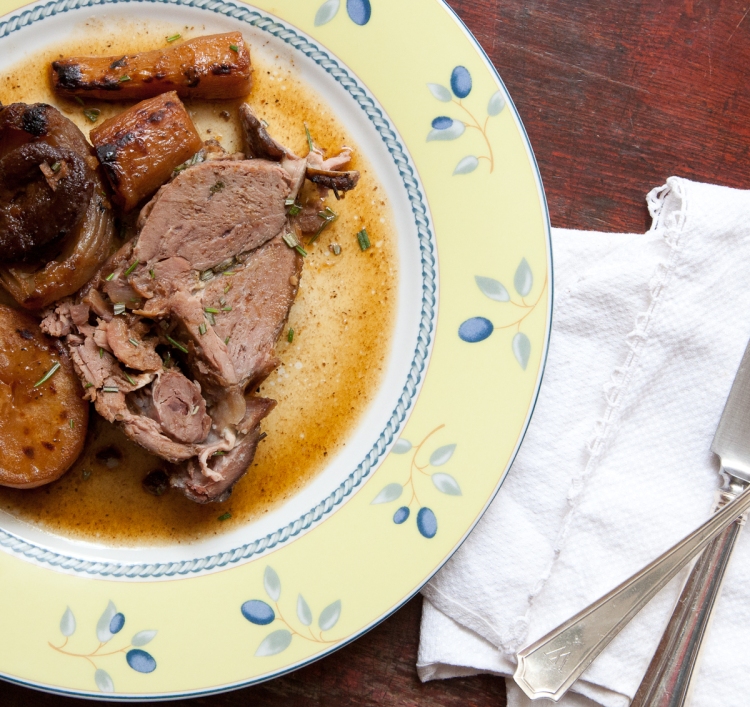 8-hour lamb is tailor-made for a slow-cooker, with only a few changes from the recipe above.  Follow the instructions through step 4, but instead of setting the lamb atop the seared onions and garlic in the Dutch oven or roasting pan first transfer the onions and garlic to the slow-cooker, followed by the lamb.  Set the cooking level on low and the time for 8 hours.  Add the potatoes, parsnips, apricots and olives as you would in the traditional recipe.

After 8 hours remove the lamb (check to make sure it’s done), strain the juices and spoon off the fat.  Break the lamb into large pieces, spread them on a baking sheet and run them under the broiler for a minute or two to crisp the exterior.  Do the same with the vegetables.  Serve as above. 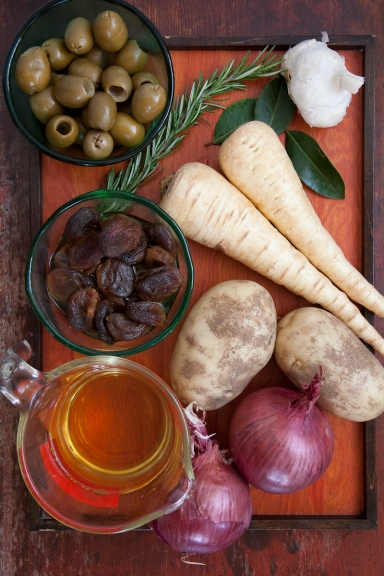 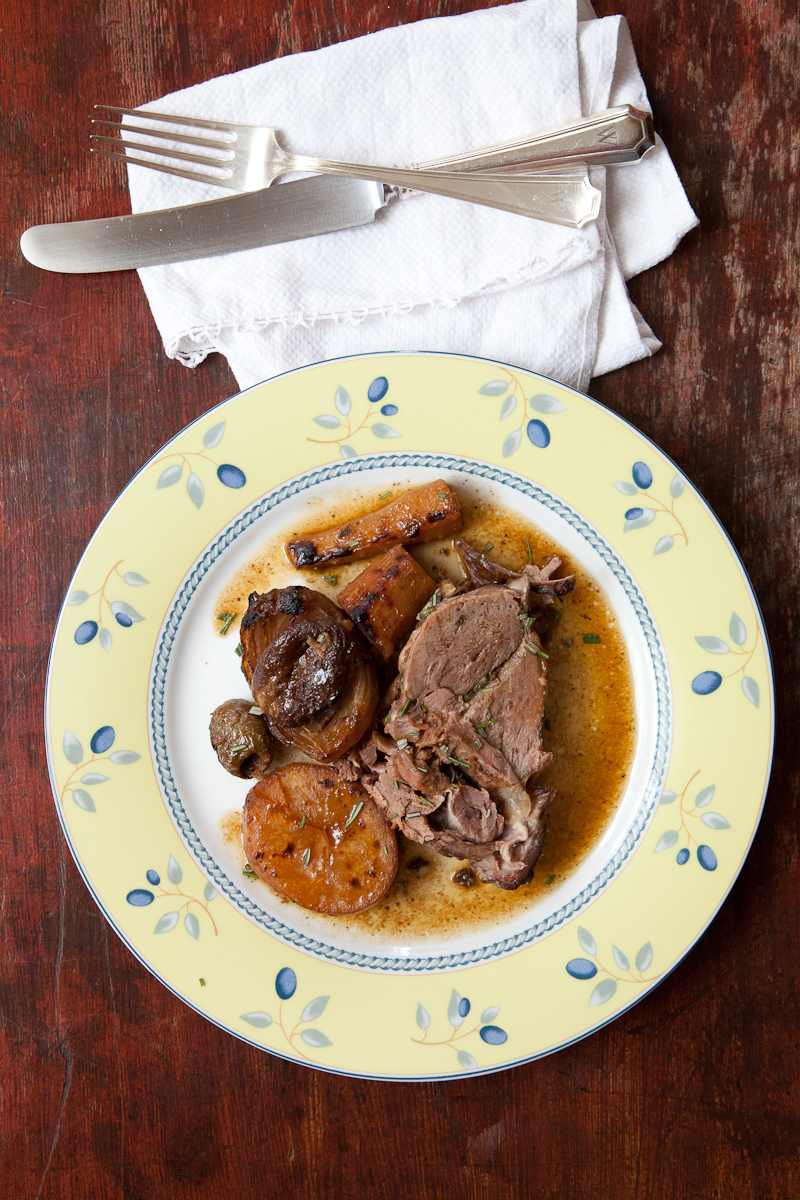 I just heard on NPR that there’s concern about a lamb shortage in the US.   We’ve come a long way.  When I first started cooking in restaurants and I wanted to serve lamb as an entree to a big party, someone would always say, “but not everybody likes lamb.”  Well I guess now they do.

In my childhood lamb most often came in the form of a leg.  I have memories of walking into my grandmother’s house in Philadelphia, after a 7-hour car ride through the horrors of New Jersey smells, to the rich yummy aroma of roasting lamb.  It was always cooked through, but yummy none the less with the amazing potatoes and onions she caramelized in the rendered lamb fat.  My mother continued the tradition, but added to it by turning left over lamb into a curry.  I’ve always loved lamb.

Ken and I wanted to do an inexpensive set-it-and-forget it kind of recipe for lamb in a crockpot.  We settled on shoulder because we’d be able to cook it on the bone,  whereas a leg of lamb, on the bone, would be too large.  With its complicated muscle and fat structure shoulder is ideal for braising and it is less expensive that leg.  In the end, we decided to try it both the traditional way in the oven and in a crock pot.  As Ken pointed out, both methods serve up delicious results.  Because it cooks so slowly, the lamb becomes  extremely tender, remains moist and actually keeps a bit of pink color.  The garlic and rosemary melt into the meat, infusing it with flavor.  Although I preferred the vegetables from the oven, they weren’t a deal-breaker.  Ken must be wooing me over to the gadget side of the fence.

This is a rich dish, so it does go quite a long way and feeds 6 to 8 people.  A last-minute squeeze of lemon over the lamb makes a refreshing addition.

Click on something to see it in detail.  Tapping your left and right arrow keys will move you through the images. 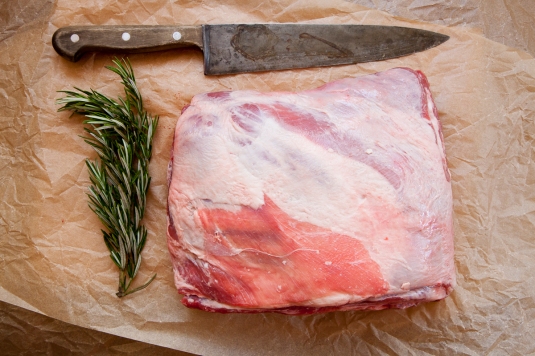 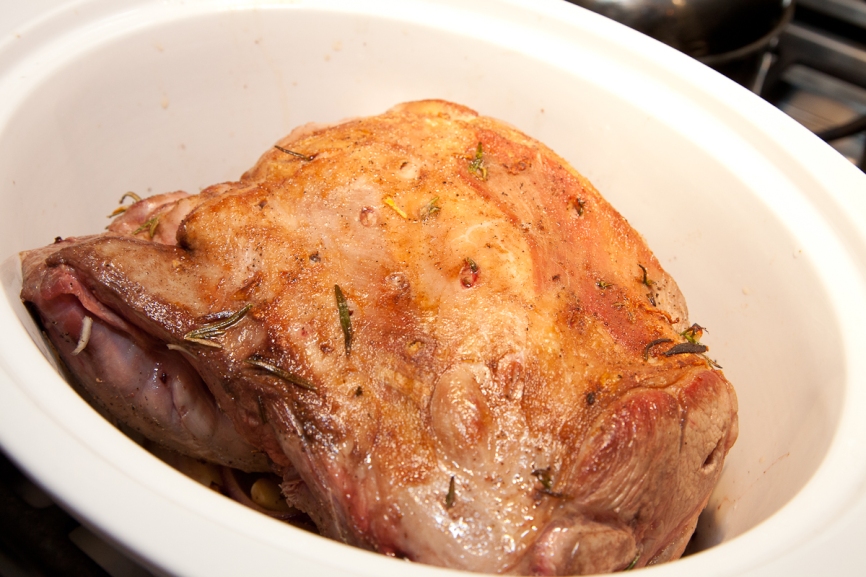