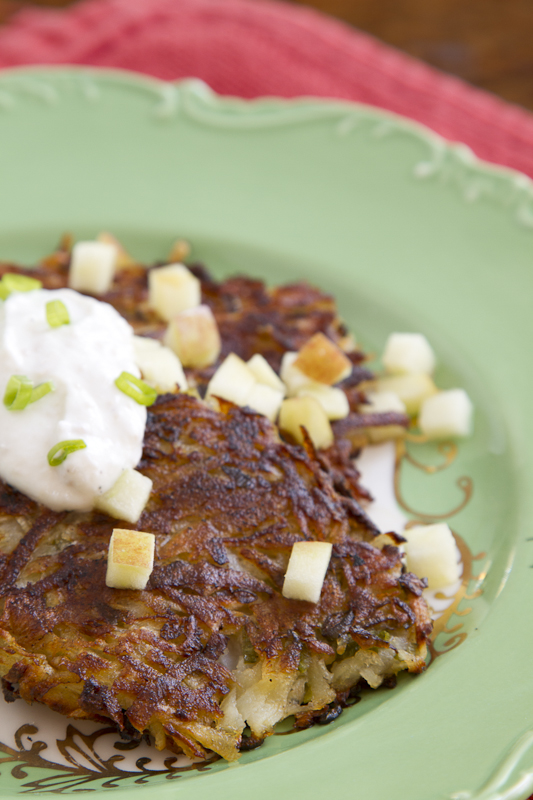 It’s been a decade since we cooked or ate Thanksgiving dinner at home.  Rialto is open, and Jody could hardly ask her staff to work if she weren’t willing to shoulder up to the hot line beside them.  On Thanksgiving evening we did what we always do–we had dinner at the very end of service when Jody could sit down, while the staff enjoyed their own Thanksgiving dinner nearby.  One effect of eating in restaurant on a holiday is that you don’t experience the post-dinner oh-my-god-I-ate-an-entire-manatee sensation of triumph–or remorse–depending on your personal inclination.

And as a consequence nobody feels compelled to rein things in at home for the next couple of days.

Parsnip Potato Pancakes may not seem like the height of indulgence, but they are fried.  Not deep fried, but cooked with a healthy amount of olive oil nevertheless.  And they are unbelievably sweet.

This marked sweetness results from the transformation of the parnsip starches into parsnip sugars as the vegetable slowly matures underground.  Carrots are sprinters when compared to the plodding pace of the parnsip growing season.  You can’t help but wonder if the wives’ tale that parsnips harvested before the first frost are poisonous sprang up as a deterrent to pulling them out of the ground before they had time to develop their distinctive sweetness.   Some farmers leave them in the fields over the winter, beneath a heavy layer of mulch, then harvest them in the spring.  John Lee, of Allandale Farm, in Brookline, told me that it used to be common to harvest parsnips before the ground froze and then let them mature in the root cellar.  By the spring they’d be sweet.

Try to purchase medium to small parsnips (four to six to a pound).  Larger ones often have a fibrous or woody core which needs to be cut out.  Like carrots, they should be firm, snapping if bent.

The sweetness of parsnips can be overwhelming, and Jody and I prefer them cut with an equal amount of potato.  We made the pancakes a couple of different ways–without eggs, with eggs, using a little oil, using a bit more, and still a bit more.  We concluded that without eggs is better than with (crispier pancakes, better flavor), and that a heavy hand with the oil is better than a light one (less sticking to the griddle).

The key to successful parsnip potato pancakes is twofold: don’t grate the potato ahead of time (see Jody’s note below); and make sure you squeeze out excess moisture when forming the pancakes.  The latter, along with a generous amount of oil in the pan or on the griddle, will insure that you get a nice crispy exterior, and the interior will cook faster, lowering the risk of carbonizing the outside.

Dollop the pancakes with horseradish sauce and diced apple.  With eggs on the side, if you wish.  No need to feel guilty.  You have been living on that lean Turkey Soup with Baby Bok Choy we posted last week, haven’t you? 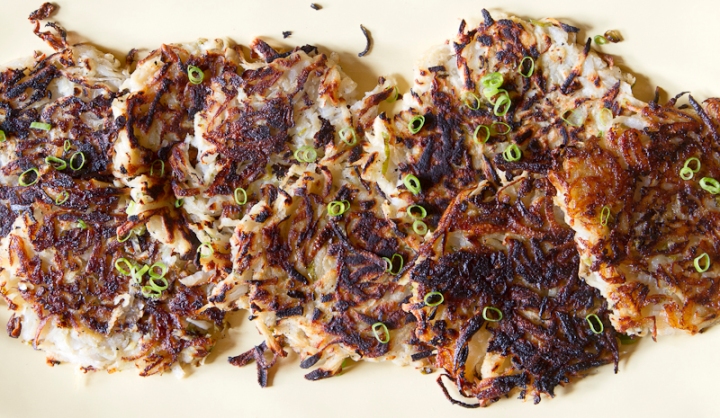 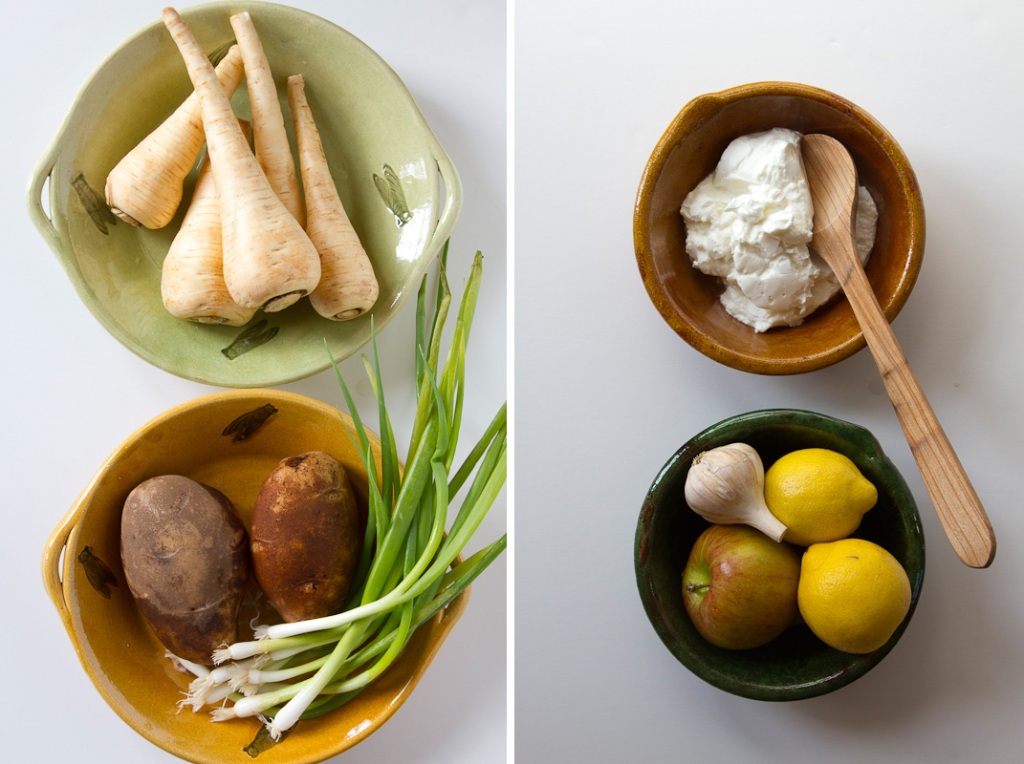 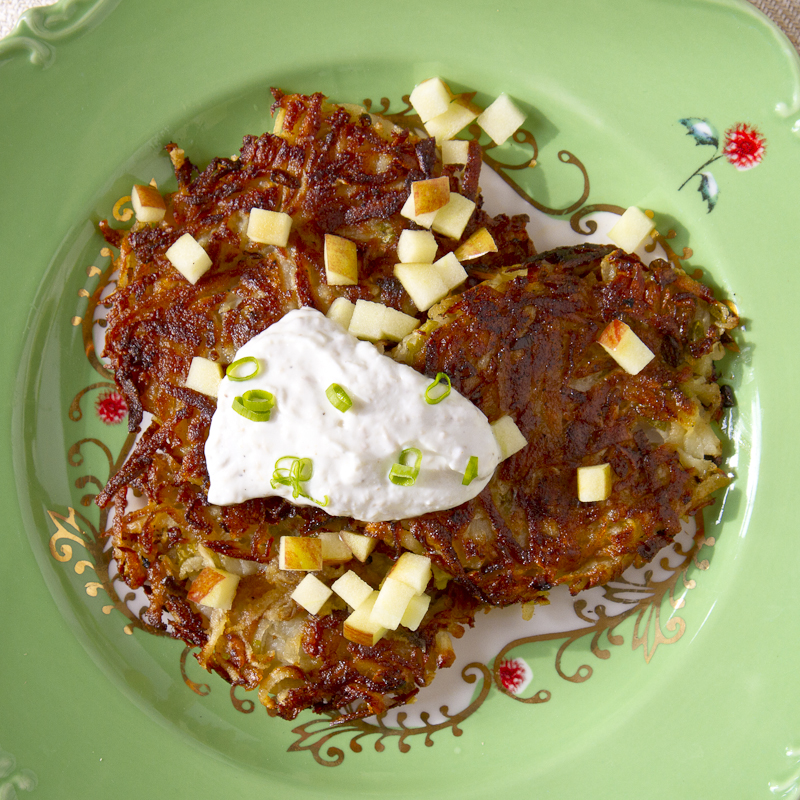 You can grate the parsnips a bit ahead of time, but if you prepare the potatoes in advance they’ll start to leak, losing much of their starch essential to binding the cakes together.

The trick to these pancakes is to start them on medium heat so they sear and don’t stick and then turn down the heat and cook them slowly so the outside doesn’t get too dark before the inside gets tender.

Ken went shopping for the recipe ingredients and brought back 0% fat Greek yogurt!!??  Something I didn’t discover until I started prepping.  Zero percent, I mean, maybe it was some valiant holiday austerity measure, but give me a break.  At least go with 2%–you’ll only have a tablespoons and it tastes so much better.

I grated the vegetables by hand because I prefer cleaning a box grater than a food processor.  I also appreciate any opportunity for physical exercise and grating is way more of a work-out than pressing a Cuisinart button.

Since I wasn’t going to make pumpkin pies today and the fridge is already bursting with leftovers, I found a new use for my impatient-waiting-for-Ken-to-finish-taking-the-pictures energy… CALISTHENICS!  I did push-ups, squats, jumping jacks and a few of those backward push-ups that kill your triceps on the edge of a chair.  So, what with the 0% yogurt and all that exercise, I figure the scale is back in balance after this weekend of Thanksgiving cheer.