This is not a post about stuffed peppers cooked in a pressure cooker.  This week’s recipe of Stuffed Peppers with Porcini and Aged Gouda is prepared the conventional way–in the oven.  Dried porcini and their deeply infused soaking liquid meet regular mushrooms (we used cremini), spinach, tomatoes, brown rice and smoky, buttery aged Gouda in the stuffing mixture.  Humble food infused with some special aromatics and good cheese.  Stuffed peppers have a bad rap in this country–usually because they’re the indiscriminate repository of leftovers–or they’ve made by people for whom flavor is a sin.  But there’s a reason why they figure so strongly in European and Middle Eastern cuisine–they taste great.

So, what’s up with Peter Piper and his pressure cooker?

Jody heard Nathan Myhrvold, brilliant geek polymath, former Chief Technology Officer at Microsoft and, most recently, author of MODERNIST CUISINE, speak at Harvard this past week.  MC is a breathtakingly photographed six-volume $450 cookbook.  Click on the link and watch the trailer showing some of the dramatic cutaway photo illustrations (and a very cool slow-mo video of a corn kernal popping).  Myhrvold is a scinece meets food kind of guy–foams, gels, surprising stuff in even more surprising forms.  But, according to Jody, he also insists that the world’s best chicken stock is made in–you guessed it–a pressure cooker.

Props to the gadget guys of the world!

Those of you who’ve been reading this blog for awhile already know that I’m a gadget guy–apple-peeler, pressure cooker, slow cooker, garlic press–and Jody is not.

At least not until now.  I have a feeling I’m going to be pestered about ginning up a batch of chicken stock à la Myhrvold in the coming months, but in the meantime Jody has becoming suddenly curious about how and why I use a pressure cooker to make grains, primarily brown rice and wheat berries.

I am not a pressure cooker zealot.  Beans in pressure cooker, for example, are a long way off from what I love about beans cooked slowly on top of a stove or in an oven.  But in some cases a pressure cooker does just fine.  Cooked, 2-cup portions of both brown rice and wheat berries may always be found in our freezer, ready for zapping in our microwave (or not) as needed.  With a pressure cooker I make them in quantity quickly, and unlike beans, neither their flavor nor texture seems to suffer.

With instant cooked brown rice at your disposal–or available in less than half the time it might otherwise take–recipes like Stuffed Peppers with Porcini and Aged Gouda come within time-manageable reach.

If you don’t have a pressure cooker, consider buying one–they’re cheap.  Or just make yourself a big batch of short-grain brown rice the usual way.  Eat some with dinner, but portion the leftovers into freezer bags and sock them away.  Wait a week, then reread this week’s recipe.

Aha!  I’ve got some brown rice just waiting to be used.

And when Nathan Myhvold knocks on your door (you can’t miss him – he looks like a trickster figure from a Scandinavian myth) you can tell him you’re still working on the chicken stock, but in the meantime he’s welcome to a stuffed pepper. 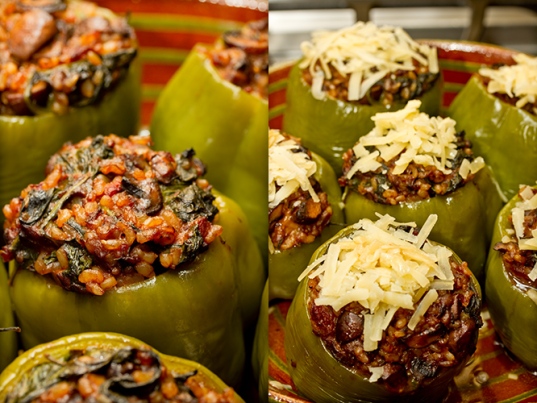 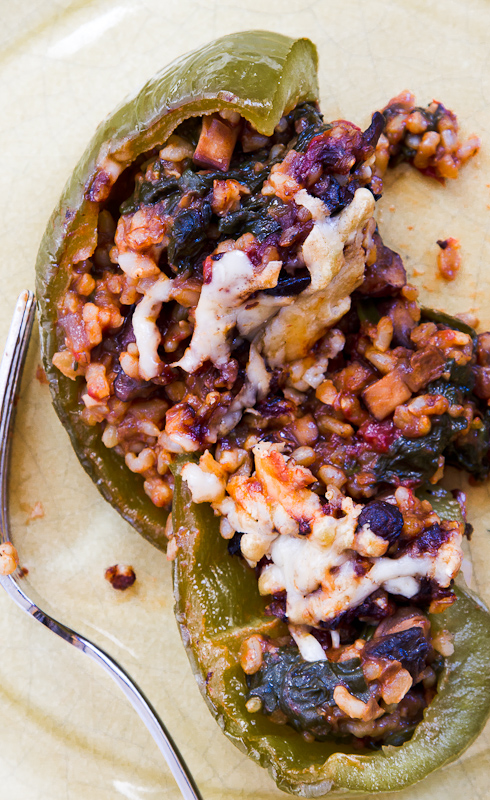 In my childhood stuffed peppers were an exotic special treat.  My mother made them with ground lamb, Mediterranean herbs and white rice, and they were always green. Red peppers were something we only saw at the end of the summer when local farmers let the green ones ripen.  Today the best peppers in the market were green, but we could just as easily have used red, yellow or orange ones had we liked them better.  Peppers grow sweeter as they ripen and, as it turns out, have a bit more of some nutrients than when they’re younger.

Stuffed peppers lost their allure for me when, as a college student, as I saw them at one student “dinner party” after another where the quality played a distant second to the miracle that you were being served anything at all.  A fashionable disregard for norms, including cooking norms, played a role in it, but how could people care so little about what they ate?  One glaringly bad meal stands out as emblematic.  I was invited into a dimly lit dorm room and joined the others sitting cross-legged on the floor under an Indian bedspread tented from the ceiling.  We were served peppers stuffed with sticky overcooked brown rice and some inedibly dominant herb.  I accepted a slice of hearty whole grain bread only to experience an unexpected crunch when I bit into it.  “Eggs,” our host explained.  “I made the bread with eggs.” “Crunchy eggs?”  He answered, “Whole eggs, with the shells.”  It all seems silly and funny now, but it was years before I could see a stuffed pepper without associating it with ridiculously bad student food.

When Ken and I decided on vegetarian stuffed peppers for this week’s post, I consulted my sister Eliza, since most of the cooking in her house is vegetarian.  I replaced my original choice of Parmesan with her suggestion of  aged Gouda, but I drew the line at using quinoa instead of brown rice.  “It cooks much more quickly!” she protested.  She was right, but I really wanted the texture of short-grain brown rice.  I like its pearly shape in my mouth, and the little pop when you bite into it.  With quinoa it’s sometimes hard to know it’s there.

We, well… really Ken, shortened the cooking time for brown rice by using the pressure cooker.

When our kids were small he became expert at whipping up a falling-off-the-bone curried chicken in no time.  The rice for this recipe took 15 minutes in the pressure cooker, as opposed to 30-40 in a regular pot.  You can actually cook the rice while preparing the first part of the recipe.

FYI you may see a run of pressure cooker recipes in future posts.  Yesterday, at a reception at Harvard, Nathan Myhrvold convinced me that no only can you make the best stock in a pressure cooker, but  also an incredible caramelized carrot soup.  As we all work to find ways to cook deliciously and efficiently, a pressure cooker seems like a smart option.  I’m determined to learn how to use one well.