Two words almost never seen paired together: quick and favas.  Yet, both apply to this week’s Lazy Man’s Fava Bean Salad with Spring Greens and Pecorino.  In retrospect, we might have called it Romantic Man’s (or Woman’s) Fava Bean Salad because it’s just the sort of thing that two people comfortable with bumping hips in a kitchen can make together for their own romantic lunch.  The salad makes 4 servings, but these can be stretched if you’re serving it as a starter to, say, grilled lamb or fish.

Fava beans are the delectable ne plus ultra for Mediterranean bean lovers.  They have an intense spring flavor when fresh and even in small quantities bring a distinct kapow of color and taste however they’re used in, whether in risotto, or in a salad assembled, like this one, from ingredients we already had in our fridge.  They are labor intensive – you need to get them out of their pods and then out of the thick skin or husks (see photos below) that surround each bean.  The traditional method is to sit around a mound of favas with a group of friends and a few bottles of wine and get loopy while splitting the pods and thumbs run down the roller coaster cars to throw the individual beans out of their seats.  The beans need to be blanched before the last guardian of the bean, the thick skin or husk, can be pinched off.  More wine.

Enter the grilling shortcut.  Grill the whole pods until you get decent grill marks.  Allow them to cool just a bit and then snip off one end of the pod with scissors.  Squeeze the snipped pods and the beans come shooting out.  These beans still need to be peeled – just pinch off a corner of the skin or husk and squeeze again.

The purple flower in our photos is borage, an herb that’s fairly hard to come by unless you know someone who grows it.  It has a mild cucumber flavor and while people have been eating it for centuries without problem, especially in the small quantities with which it’s used in dishes like this, people with liver sensitivities are advised to avoid it.  Any edible flowers will do here, as long as they add a splash of contrasting color to the salad.  Enjoy.  Ken 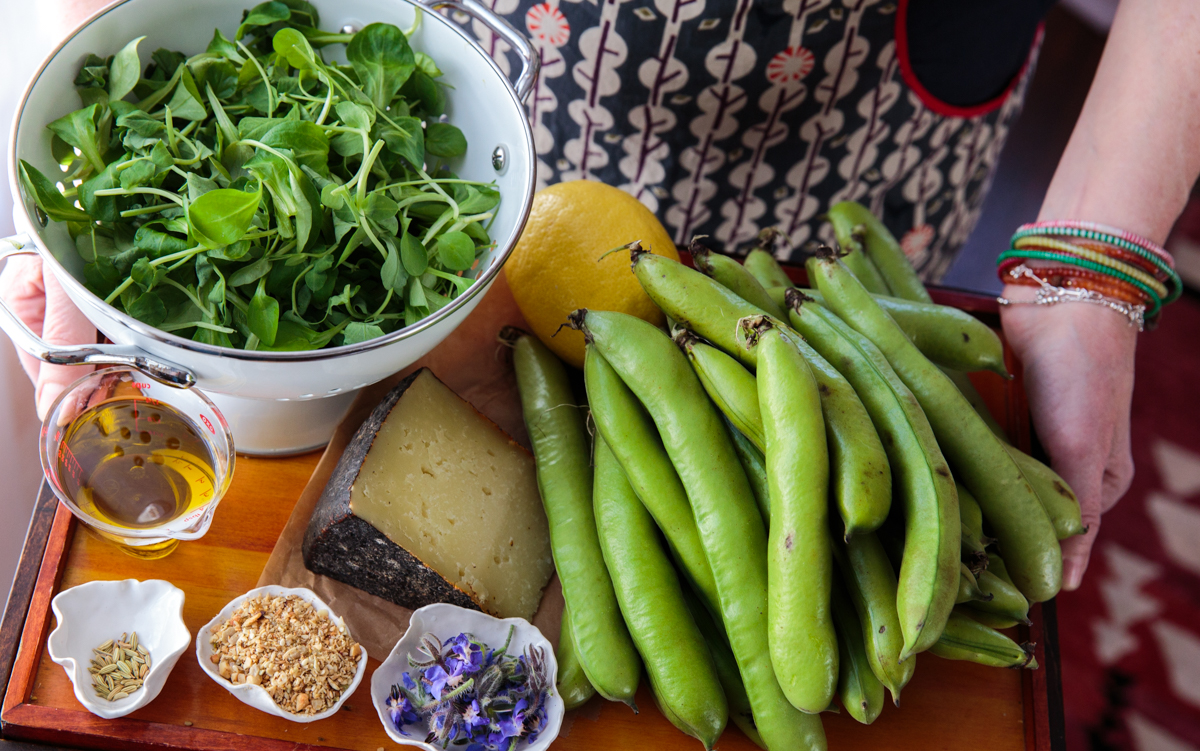 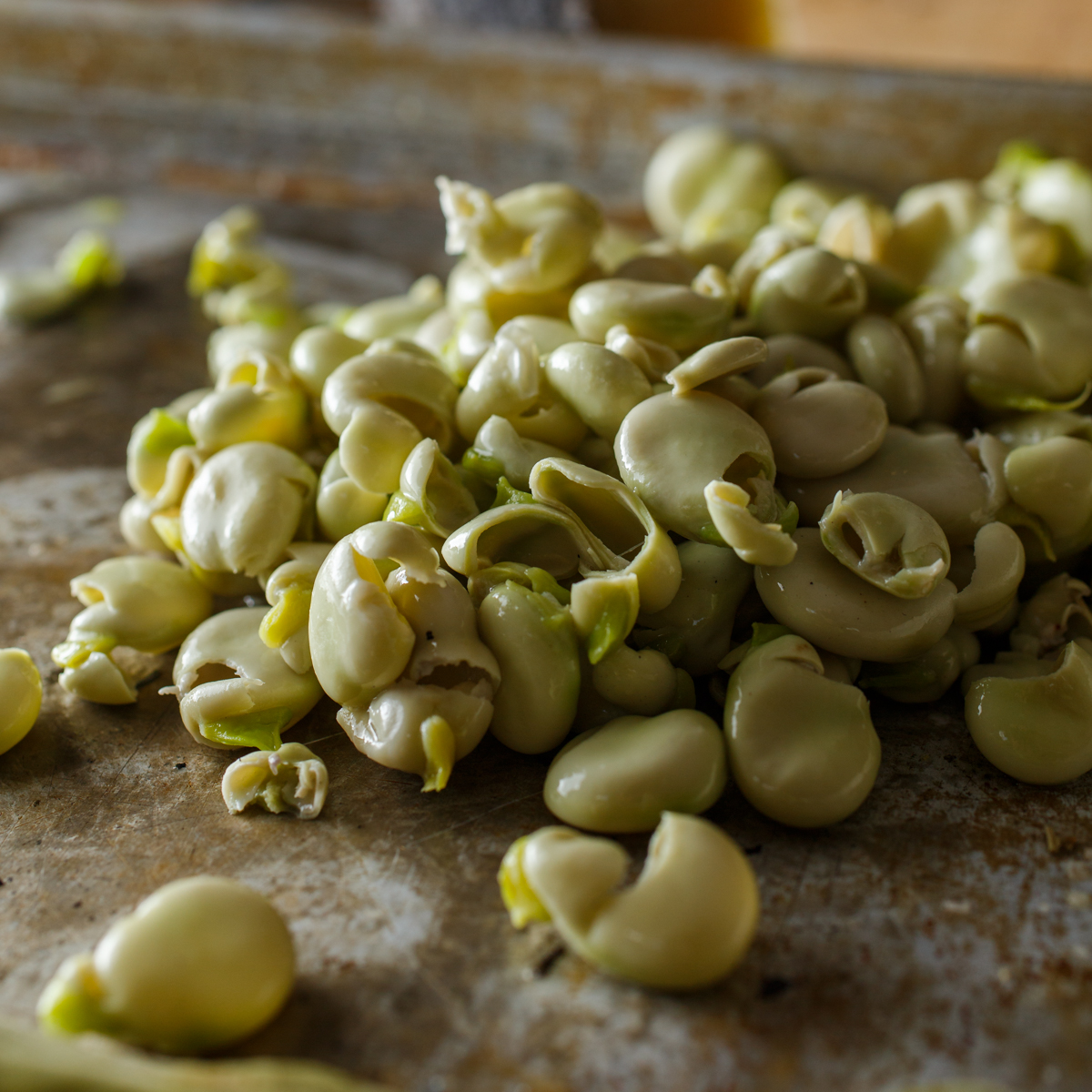 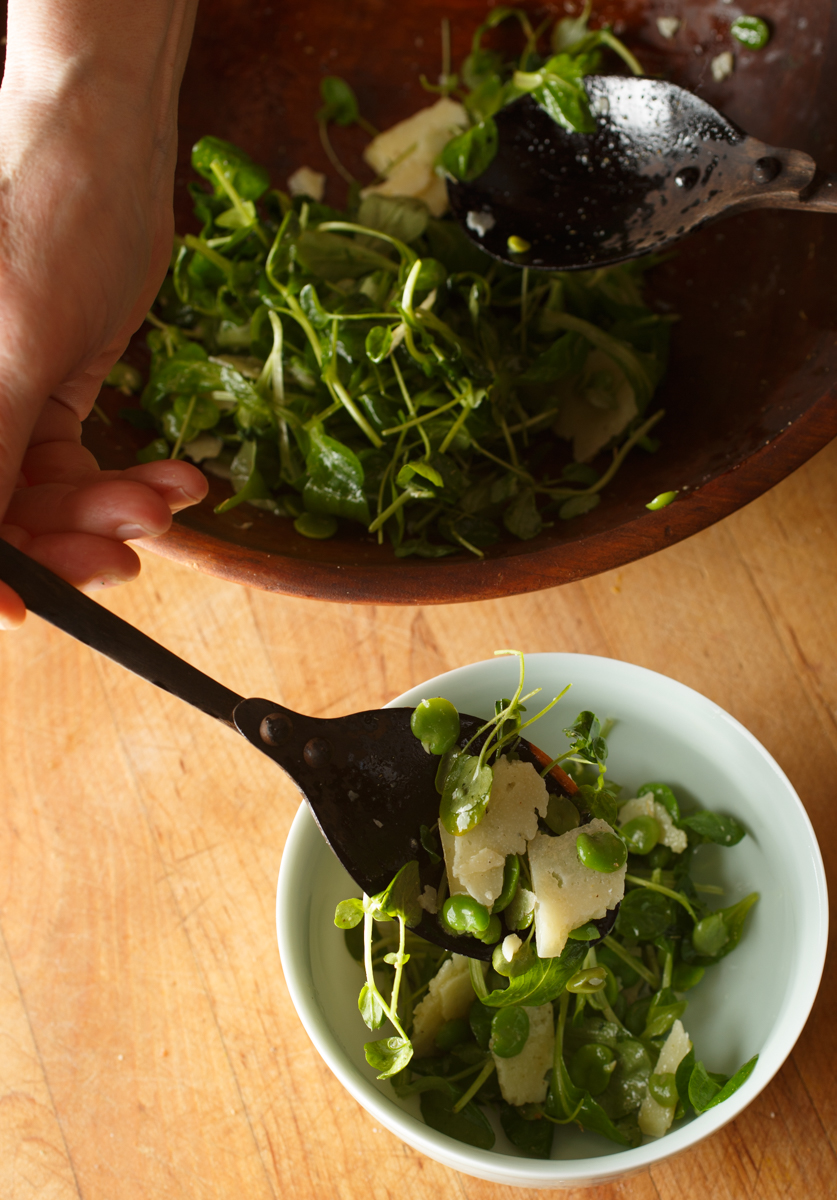 I first discovered favas 30 years ago.  I fell in love with the whole shebang, with the pod and its sleeping-bag protection for the beans, and the beans themselves – flavor, color and shape.  People complain, “But they require so damn much work!”  I’m as interested in shortcuts as anyone else, but one of the pleasures of cooking is sinking into the process.  Prepping favas is a simple task, the kind of work where your fingers can do one thing while you daydream (or not).  Favas, like the old adage about firewood heating twice (chopping, burning) offer dual pleasures–slowing down, and eating.

Grilling doesn’t give the beans a particularly charred flavor, but it does make it much easier to get them out of the pod.  They’re steamed in the pod on the grill.  (You can make your guests share the work by giving everyone a plate full of snipped grilled pods, along with a wedge of good Pecorino, some olive oil, lemon juice and dukkah for dressing the beans.)

I never considered eating the pods until one of our runners from Morocco told me that his mom always snapped tender young pods into pieces and braised them with onions, garlic, tomatoes and other aromatics.  I started using them for soups and sauces.  (Only use pods that are bright green, firm, and not full of black spots.)  If you’d like to see for yourself, check out our post on Littlenecks with Fava Pod Pesto.