As you read this, we’re scrambling about, dropping off the animals, picking up last-minute compact flash cards, camera batteries and trying to remember where I stashed the international voltage converters.  This afternoon we depart en vacances.  We’re spending a couple of weeks connecting with old friends, exploring prehistoric cave painting, cycling, drinking, eating and playing Bananagrams on the terrace.  I’m still uncertain about whether The Garum Factory will go dark or if I’ll rig some sort of wifi connection for the occasional splash of photos.  In the meantime we leave you with a dish guaranteed to make you a back yard fire god, Grilled Skirt Steak with Spicy Green Romesco.  Look at the photos: No complicated technique.  If you can handle a food processor you’re already past the bouncer at the door.  Believe me, you’ll be killer.

Regular readers know we’re big fans of Romesco,* a spicy Catalan condiment of roasted peppers thickened with nuts.  At any given moment there’s a 50% chance a bowl of Romesco is sitting inside our refrigerator.  Next to homemade mayo and garlic yogurt, it may be the most frequently made sauce in our kitchen.  Puréed peppers, olive oil and nuts–how can you go wrong?

Traditional Romesco is made with red peppers.  Andrew Hibert, Chef at TRADE (full disclosure: TRADE is one of Jody’s restaurants), thought to take a step I hadn’t seen before: he makes it with green peppers.  And he makes it spicy.  After tasting it I immediately said to Jody, “This has got to be a blog post!”  At TRADE it’s served with briny roasted littleneck clams; we’ve since paired it with skirt steak, then used the leftovers to add some zap to Copper River salmon–both were delicious.

Skirt steak is sometimes called the poor man’s flank steak, but as long as you take care to buy a piece that’s trimmed of sinew and not too fatty it’s pretty near as satisfying, and much much cheaper than flank.  It’s great for stir-fry and grilling because it cooks so quickly.  Both skirt and flank steak come from adjacent regions on the lower side of a cow, and both have great, meaty flavor, albeit skirt’s a bit chewier.  In the flavor versus texture debate, I come down on the flavor side.  While I understand why texture-fetishists may prefer filet mignon, to me there’s no comparison in the taste between skirt or flank and filet mignon.  It’s so gratifying to actually chew your meat sometimes, as long as you don’t have to chew too long.  Evidently I’m not alone.  Skirt steak figures as the primary ingredient in many “authentic” Bolognese recipes.  Something to keep in mind if you don’t just scarf leftover down cold, with a dab of spicy green Romesco.

The recipe calls for 1-2 serrano peppers; 2 appear in the ingredients photograph.  The heat of serranos varies–not as much as jalapenos, but enough to make us suggest you start with one, taste it raw, and then invite another, only if the first is milder than you expected.  We unthinkingly threw 2 into our first batch and ended up with VERY spicy Romesco.  This isn’t a macho contest–too much heat obscures the other flavors.  Use 2 right off the bat at your own risk.  Enjoy.  See you in a few weeks.  Ken

P.S. I doubt if my camera is going to be allowed in the caves, but if it is you’ll see pictures here. 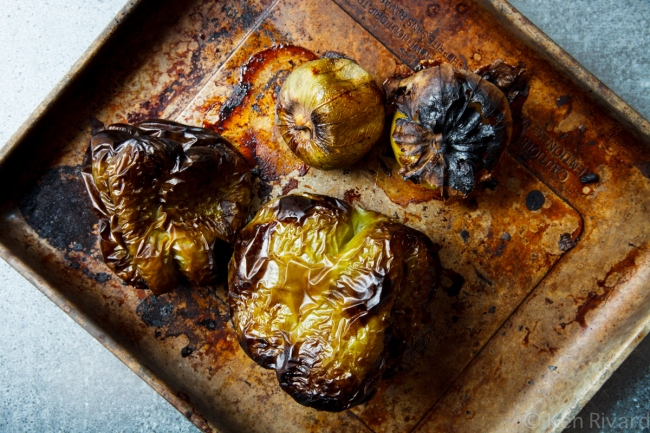 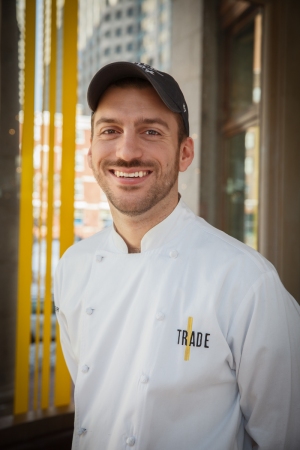 I first discovered Romesco about 20 years ago in a hard copy newspaper or magazine–I can’t remember which.  I fell in love.  It brought together my favorite things in a magical flavor-packed combination–roasted red peppers and tomatoes, heat, nuts, garlic, acid, mint, really good olive oil.  I’ve used my adaptation of the recipe over and over ever since.

When Andrew Hibert, the chef at TRADE, said he wanted to put a Romesco made with green peppers on the menu, I was skeptical.  Why mess with something perfect?  But I relented… and he was right.

His recipe calls for regular green tomatoes, but we couldn’t find them so I used tomatillos.  I made a few more personal tweaks for my smaller recipe, but the foundation is his.  It’s not as sweet as the original recipe, but it’s still awesome.

I put Romesco on everything–steak, salmon, roasted vegetables, even cheese sandwiches.  Roxanne uses it as a dipping sauce for shrimp.  Think of it as a vegetable pesto, one more perfect condiment for summer. 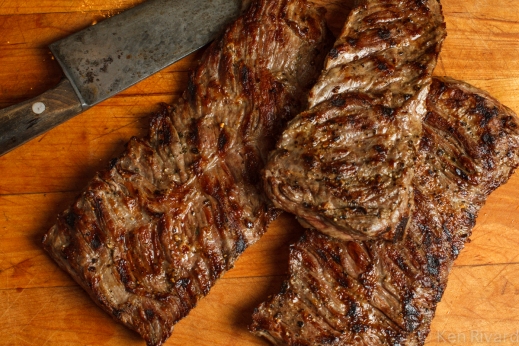 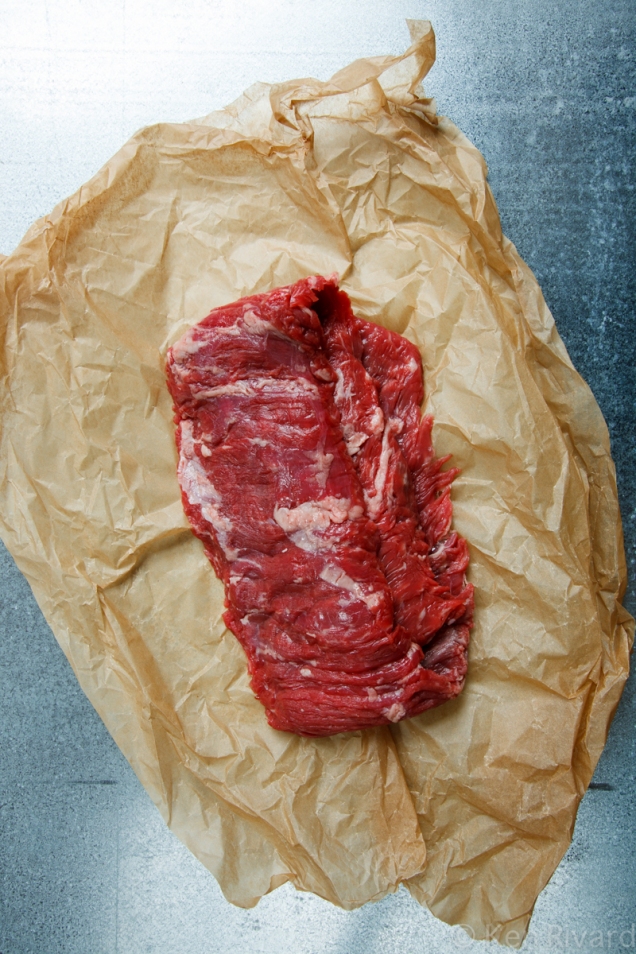 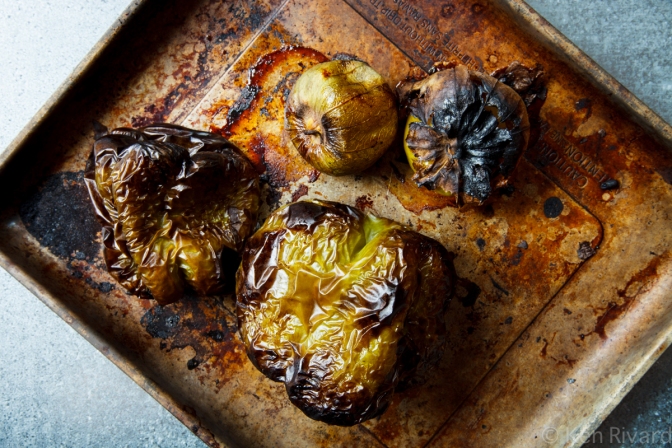 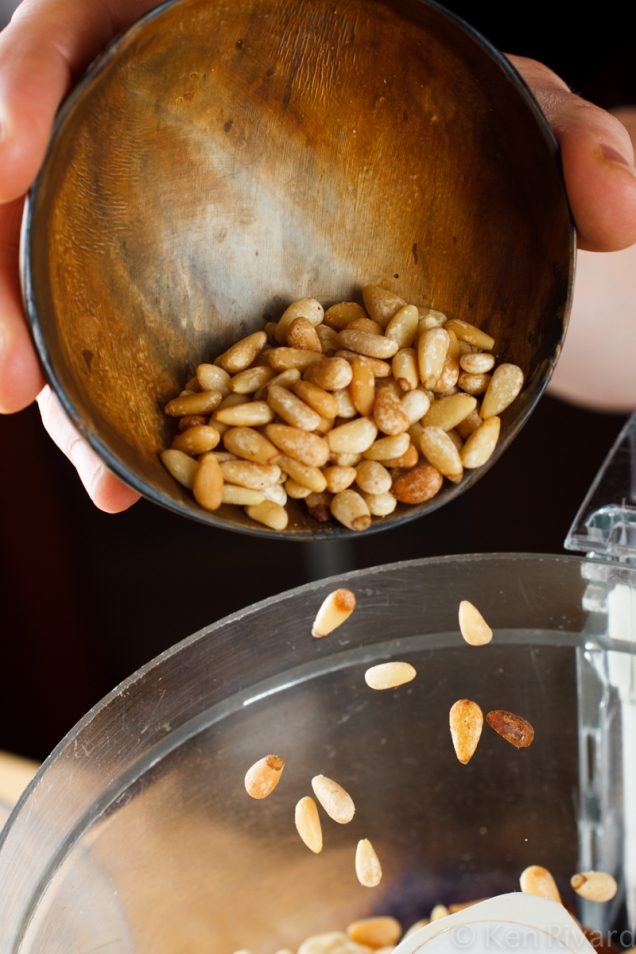 Open the ancho pepper and remove the seeds. 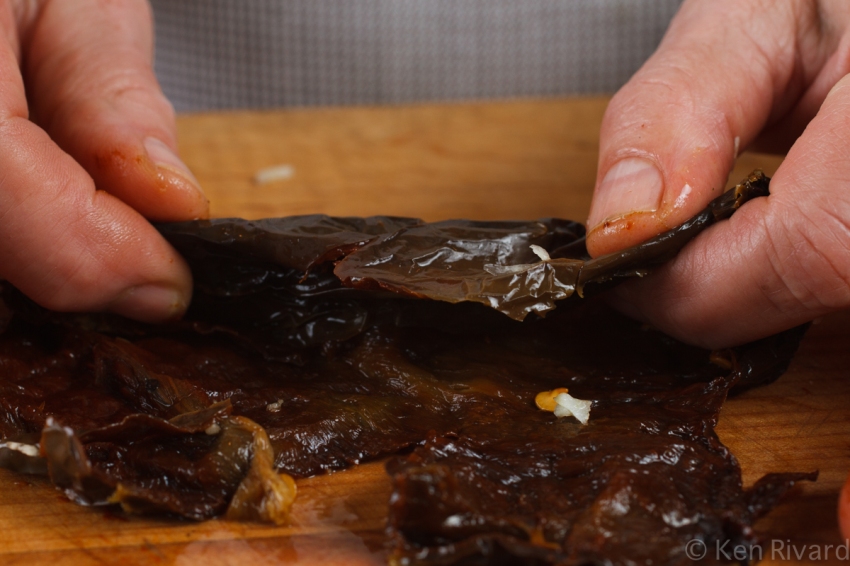 Roll the pepper into a tube… 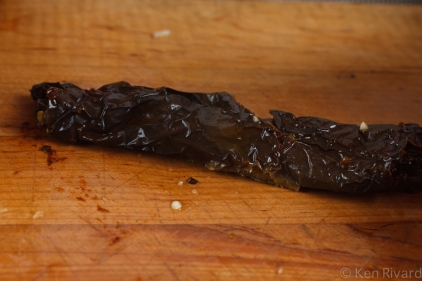 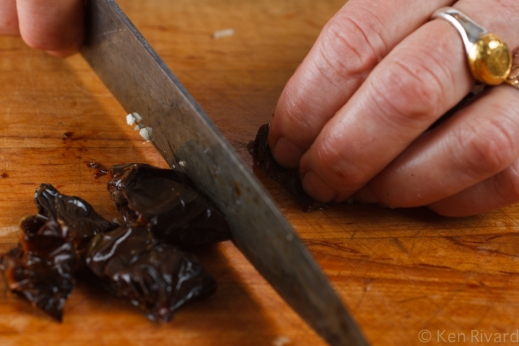 …and slice into cross sections before adding to food processor. 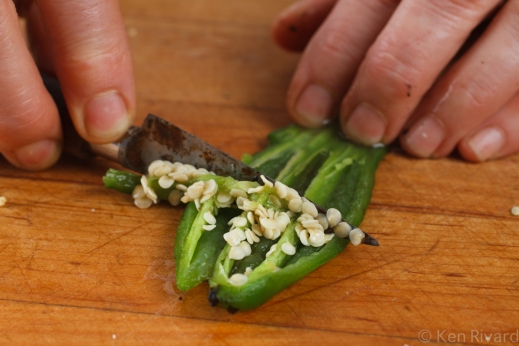 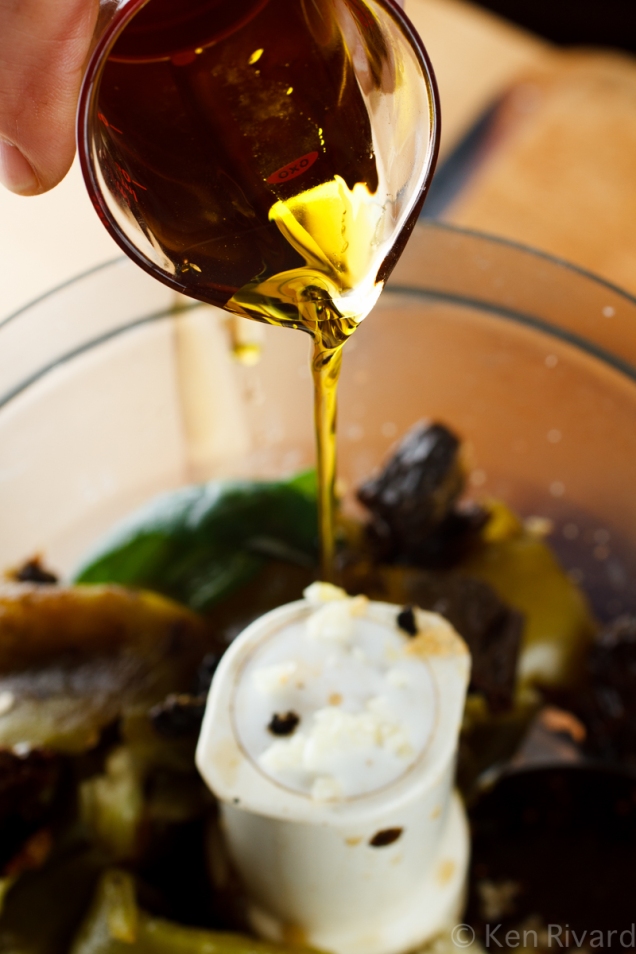 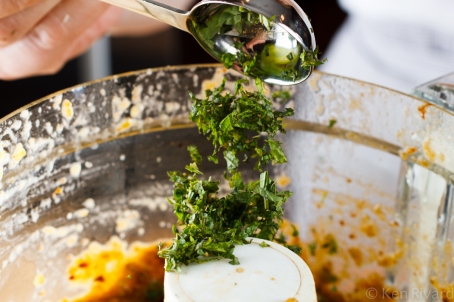 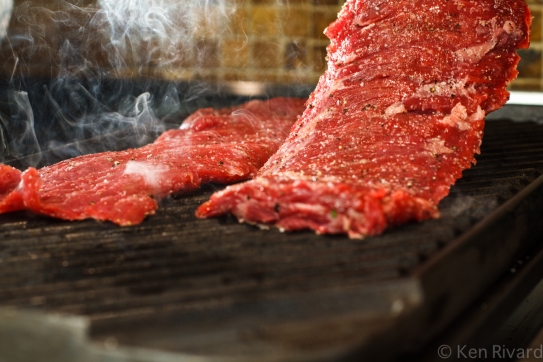 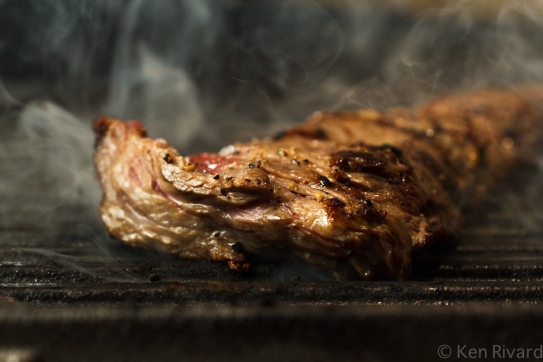 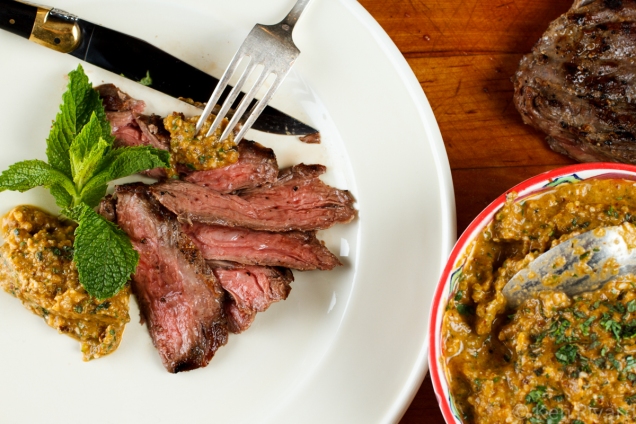