The good news is you get a great pasta sauce this week.  The bad news is you get the pasta part of the post next week.  We thought asking you to make both the sauce and the fresh pasta would be asking too much, so this week we’re doing Rialto Bolognese, enough sauce for three meals.  Next week we’ll be posting Fresh Tagliatelle.  You can wait until then to bring them together, or simply use a pound of your favorite fresh wide noodle pasta and jump the gun.  In fact, the great thing about a sauce like this is having it on hand, ready to go, for a meal when all you have to do make the pasta.

Bolognese is not a simmer-all-afternoon recipe, but it does cook for about 90 minutes.  Tomato sauces from other parts of Italy, especially farther south, emphasize flavoring a tomato base with a small portion of meat, sometimes for a long time.  Time is invested to pay for flavor.  Bolognese is exactly the opposite–what would be a flavoring in a sauce from a poorer environments becomes the main attraction.  It’s about meat, different kinds, brought together by tomato, wine and stock.  The addition of milk and, optionally, cream, further distances Bolognese from cucina povera.  The result is a sumptuous partner to wide flat pasta with plenty of surface area for the sauce to grip.  Tagliatelle is ideal, but fettucine is an acceptable alternative and linguini will do in a pinch.  Spag bol, whatever its other virtues, is not the way to serve Bolognese–spaghetti is too narrow.  Tubular pasta shapes that trap sauce, while not old school, also work.  Experienced Bolognesi might note that we use a bit more tomato than many recipes–we just don’t need quite as much culinary luxury as we once thought we did.

We matched a pound of fresh pasta with a third of our Bolognese (about three cups), which made for a generous amount of sauce without veering into philanthropy.  I’d advise you freeze the remaining sauce in two equal amounts in separate bags.  Be sure to let the noodles and Bolognese heat together for a minute so the pasta can absorb some of the sauce.  If everything seems too thick, a ladle of pasta water will thin things out nicely.

Back to the tomatoes.  And full disclosure.  A convoluted, Escher-like moral conundrum descends on our blog this week.  What do you do when a company pays you to endorse a product that you’re already using–and like?  All of the canned tomatoes you’ve seen or read about on this website for the last two years have been Muir Glen or, on rare occasion, certified San Marzano tomatoes from Italy.  The former are the canned tomatoes that give us the most flavor bang for the buck.  We chose them without any inducement and we paid for them, with our bucks.  If you had asked us what kind of tomatoes we use, I’d have told you, Muir Glen, for free.

BUT: If you’re reading this post some time after the original publication date, it’s possible you arrived here via a link on a Muir Glen advertisement.

For the record:  We used Muir Glen tomatoes in this recipe.  We’ve been using them a long time and we think they’re great.  Muir Glen paid Jody a fee to provide them with a recipe (this one) to use in an advertisement.  Jody’s fee is going to Partners in Health, a wonderful organization doing great work for people who never get to eat Bolognese.  My name is Ken Rivard and I approved this post.  Enjoy.  Ken

Farro Update: I found a package of Rustichella d’Abruzzo Farro (made from pearled emmer) in my local Whole Foods last week.  It was delicious–after a 25-minute soak, and then 20 minutes to cook.  Bob’s Red Mill has also started producing an emmer farro, although you’d never know that from the package, which just lists the ingredients as “wheat.”  Their website is more illuminating.  Furthermore the site describes the emmer as “lightly scratched,” which I’ll interpret as semi-pearled.  I got the B’sRM Farro online, along with a third Italian farro.  As soon as I get an opportunity to cook the last two I’ll report back. 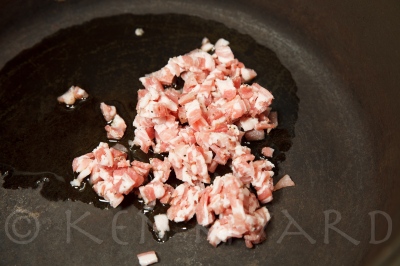 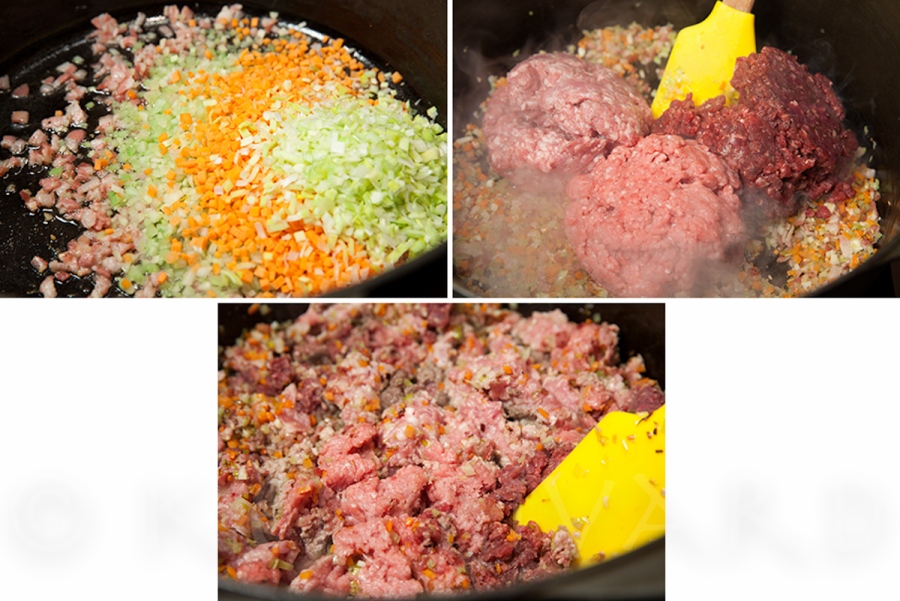 AND COMING NEXT WEEK!

There are as many ways to make Bolognese as there are to skin a cat.   Recipes are influenced by what is on hand.  Many Bolognese recipes call for livers, a way of adding richness and depth.  We used duck livers because all of us like them and because at Rialto we cook so many ducks in the course of a week that we’re always struggling to find a home for the livers in other dishes.  In consequence, our Bolognese is rich, filling and forever satisfying.

Food historians think that milk entered the equation because the lactic acid presumably softened the meat, which a century or two ago might have been a far cry from tender.  The tomatoes would have been a later addition.  I went back an forth about how much tomato to use – 3 or 4 cans.  A very traditional recipe would probably use 3, but I preferred 4.  You decide.  Feel free to skip the cream at the end, but sometimes it’s just the thing.

The beautiful perfectly diced vegetables are the handiwork of Rialto Sous Chef Peter McKenzie, who on hearing that I needed certain quantities of celery and carrots and leaks for a Bolognese, pulled out his chef’s knife and made my blogging life that much simpler. 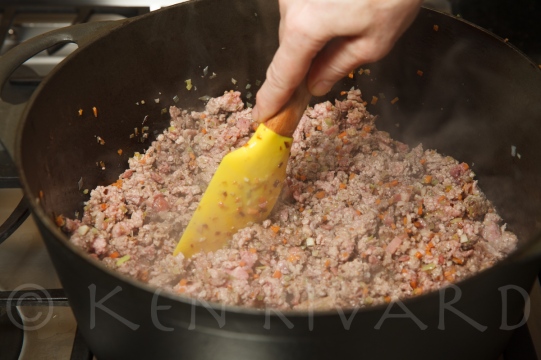 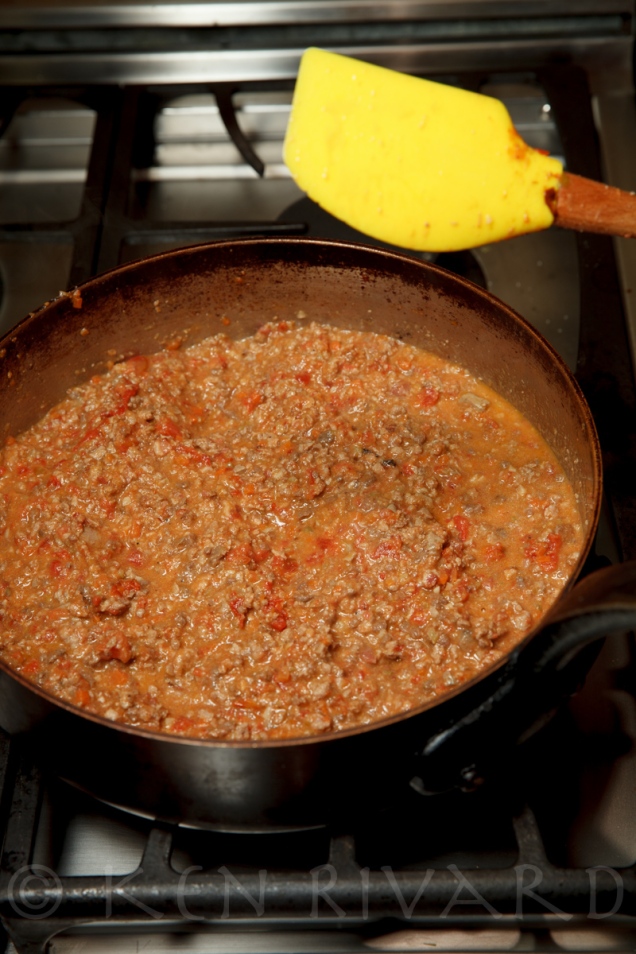