Once in awhile someone asks me if I’ve read Nostromo by Joseph Conrad.  My response is that I’m saving certain novels for my twilight years–Nostromo, Vanity Fair  and the complete works of Stendahl, to name a few.  But when it comes to food, everything is fair game now.  No treats held back for my dotage.  In the last year I’ve had the chance to sample lampascioni (edible hyacinth bulbs from Puglia) and bottarga (the dried roe sac of mullet, grated over pasta).  Less rare, but still wonderful, I’ve also had access to fiddleheads and ramps.  I’ve eaten fiddleheads many times, but while I’d heard of ramps, until recently I’d never laid eyes on them.  All of these things share a common quality of wildness, which means they haven’t had the flavor or nutrients bred out of them.  This past week, while foraging in Whole Foods, I encountered my first ramps in situ, that is, sitting in the produce section.  I rejoiced.  I purchased a dozen and brought them home.  I could finally make that ramp butter recipe I’d been carting around for years.  However, when the Hakurei turnips failed to show for our blogging session this past Thursday, Jody peered in the fridge, saw my ramps and invoked imminent domain – Fiddleheads and Ramps with Salami.  Forager emptor.

The earthy flavor of fiddleheads isn’t to everyone’s liking, but they do grow on you and they take well to assertive fats, which is why you see them paired so often with bacon, guanciale or dark meat fowl like duck.  If you’ve ever taste a commercial onion and thought that there wasn’t much there except a single sharp note, then you’re going to love ramps. Ramps have a complex pungency pungency that includes elements of leeks, garlic and onions.   Experienced foragers claim to be able to smell them in the woods when they arrive in the spring.  They can be used raw or cooked, both the bulb and the leafy green parts, although they’re more fibrous than a spring onion, especially the stalk.  Some ramp butter recipes suggest blanching them for 30 seconds, then plunging them into ice water before using them.  Others, like the one in the link, just forge ahead with them raw.  Regardless of your preference, be sure to trim the roots off and give them a thorough cleaning to remove any grit.

We tend to make treats like ramps and fiddlehead the center of attention, which means we either eat them as a first course, or make them the centerpiece of light dinner or lunch, with some good cheese or a salad.  I’m going out now to buy some more.  You know, for the ramp butter.  Enjoy.  Ken

A NOTE ON THE NEW THEME: What?!  You didn’t notice?  I know, I know, it’s big and gaudy.  We’re still at the first-date stage, still a bit awkward and unwieldy, but over the next couple of months as I begin to get a handle on typefaces and photo-sizing in a new environment our relationship will doubtlessly morph into a dazzling visual panorama of Jody’s cooking.  In any event, that’s the plan.  Activating the theme has wreaked havoc on the display of previous posts, making some of the photos overlap, inserting bizarre, unrequested changes of font, etc.  I will, eventually work my back through our entire oeuvre.  Until then, please be patient.  Thanks.

Fiddleheads and Ramps with Salami

Garum Factory recipes are usually tested at least twice, but in this post, I was winging it.  I made the mistake of waiting until the morning we were supposed to blog before going shopping, never a good idea.   When I discovered that Hakurei turnips weren’t to had for love or money, I started to feel apprehensive.  What were we going to do?   Then I saw them – local fiddleheads!  I grabbed a bagful.  Ken’s ramps were a serendipitous discovery at home – I appropriated them.  Thank God no one had eaten the Sopressata!   I love how this recipe turned out and if I were going to do it again, I’d use twice as many ramps.   It’s so Italian in its simplicity, and so French in its use of butter.

Click on something to see it with a little more detail.  Left and right arrow keys will move you through the photos. 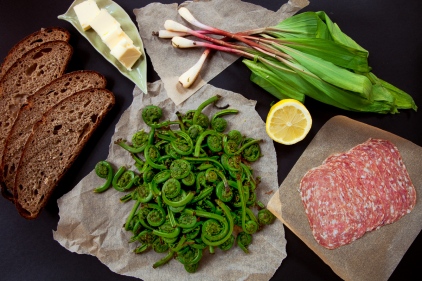 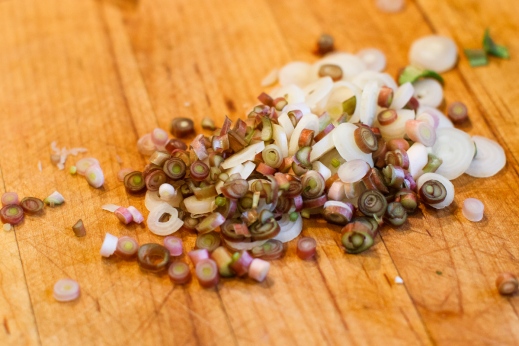 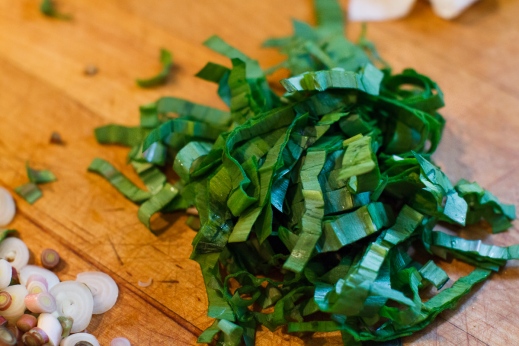 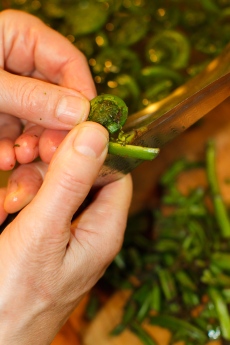 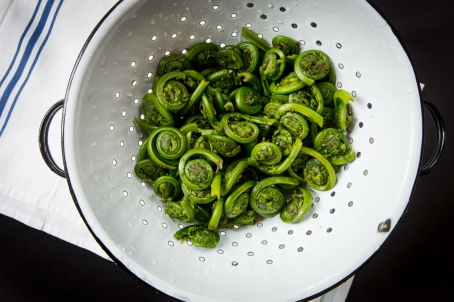 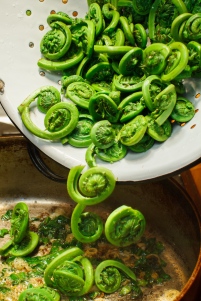 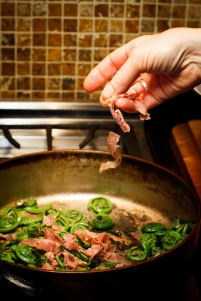