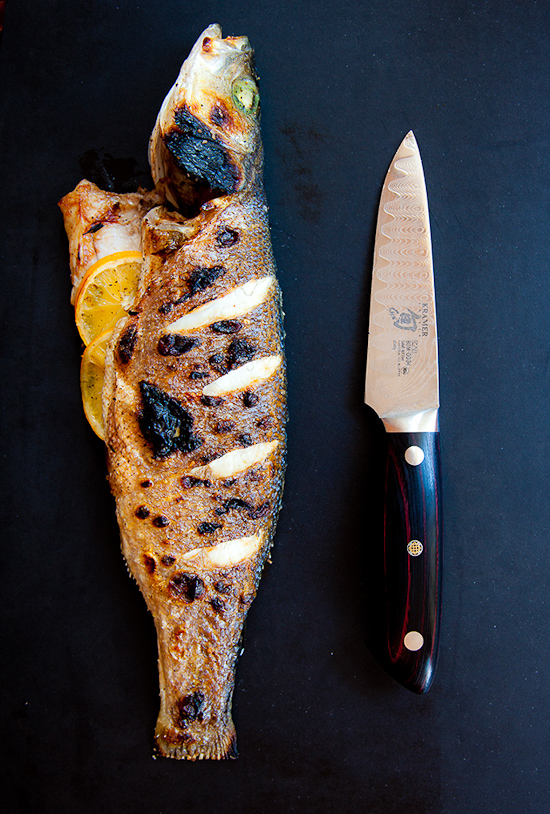 I learned to clean fish when I was nine-years old, taught by my father, practicing on the sunnies, perch and bass my brothers and I caught in rural Michigan.  Cleaning fish is a tripartite affair–scraping the scales off while grasping a slippery tail, gutting and removing the viscera, and cutting out the gills and fins, preferably without spearing yourself on any of the dorsal spines.  The process, conducted with a Cub Scout jackknife over several sheets of the Kalamazoo Gazette spread on the cement floor of the basement, was serious business.  Rolling up the gory newspaper was always accompanied by a sense of relief and I suppose it was my first introduction to the inherent tension that accompanies the process of eating something that was once alive when you don’t get to skip any of the steps between life and death.

Your fishmonger will do all of this for you.

But why bother, you may ask, when I can just buy fish already fileted?

In a word, flavor.  Fish cooked on the bone has an undeniable layer of robust tastiness that simple filets do not, in the same way the meat cooked on the bone tastes richer, meatier.  Branzino, red snapper, mackerel, bluefish, trout, char, small salmon and even chub all work well, although different fish will have different degrees of boniness.  Trout, for example, has a lot of fine pin bones, even after the boning procedure I photograph below.  They’re not a problem if you know to look for them.  Chub is even bonier, but the bones are bigger.  On the other hand, chub, which used to be considered a trash fish, is one of the tastiest pieces of seafood going when roasted on the bone.  And if the fish is big enough you can introduce yourself to a new cook’s delicacy–fish cheeks, the piscean equivalent of chicken oysters.

But I don’t like seeing the head and the eyes, and all that business with boning.

Get    over     it.   We’re big boys and girls, right?  Boning itself is simple–the photos and instructions will guide you through the process–and you can practice on this recipe.  That way the next time you find yourself in a fancy restaurant you’ll earn the waiter person’s respect for ordering the evening’s special–whole roasted branzino with braised fennel–instead of her pitying gaze when you retreat to the safety of the sautéed chicken breast.  Ken 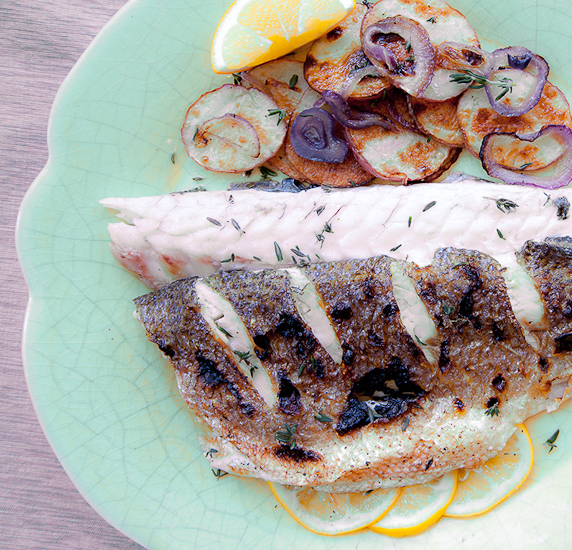 This produces very generous portions of fish for 2 people, but it could probably be stretched to serve 3 or even 4 if there were lots of sides. 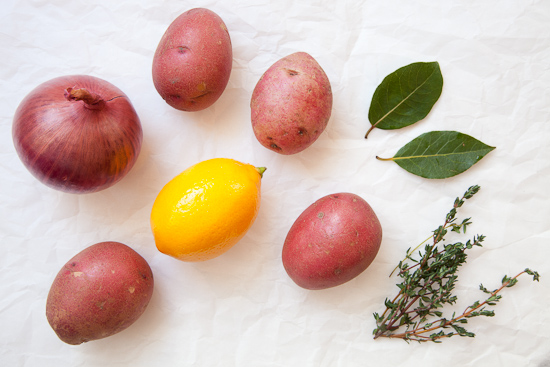 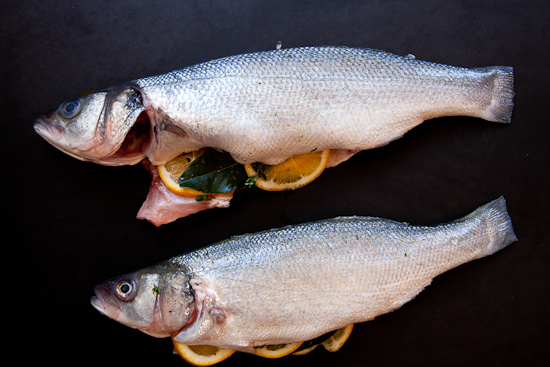 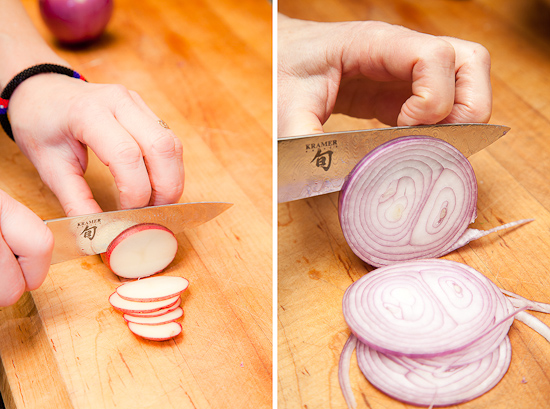 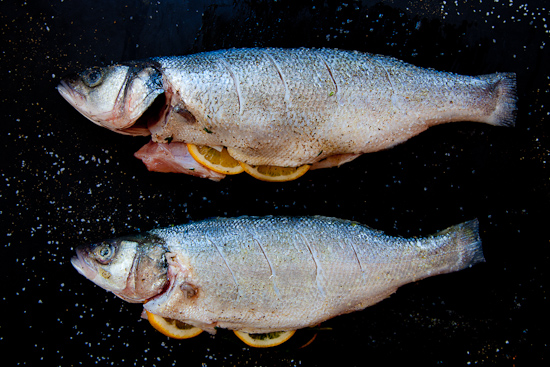 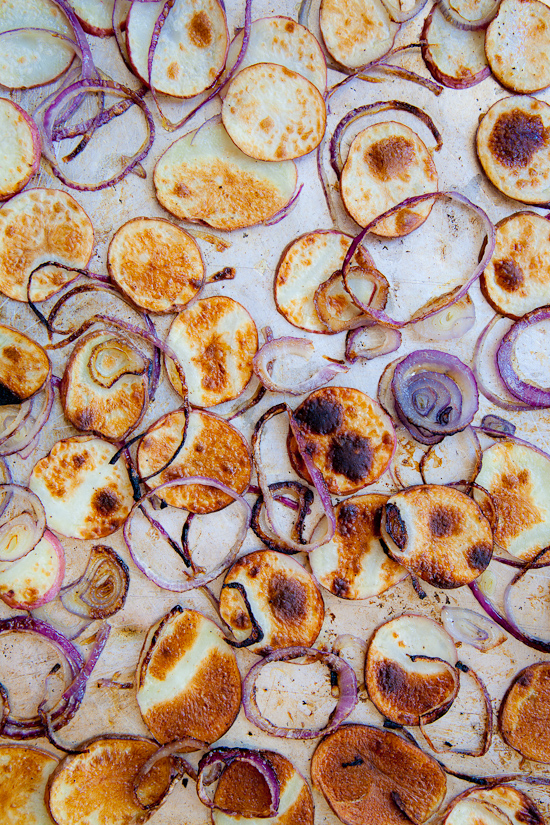 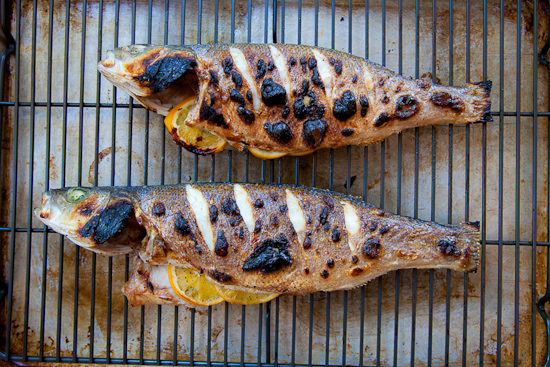 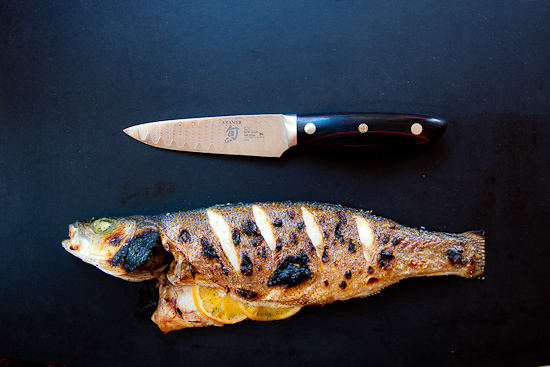 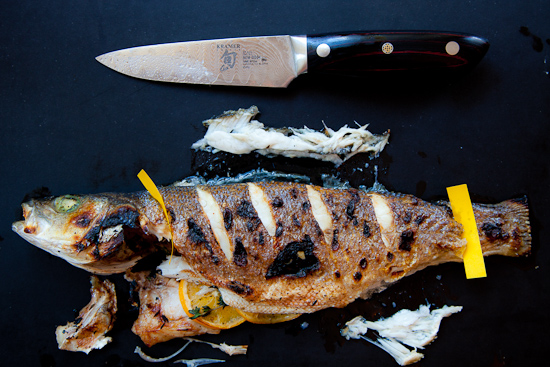 Slide the edge of a knife along the dorsal (top) ridge and pull away the remains of the top fin. Do the same for the ventral (belly) fin. Scrape away any remanats of the gills. Make two cuts (marked by yellow tape): cut through the fish near the tail; cut just down to the spine behind the head, leaving the head attached.

Use the knife to lift off the top side of the fish.  You shouldn’t have to do any cutting.  The fish should come away from the bone easily. 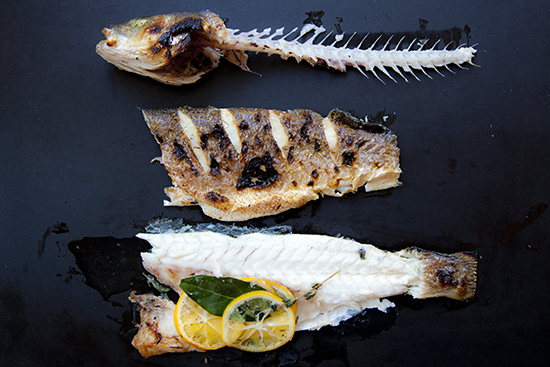 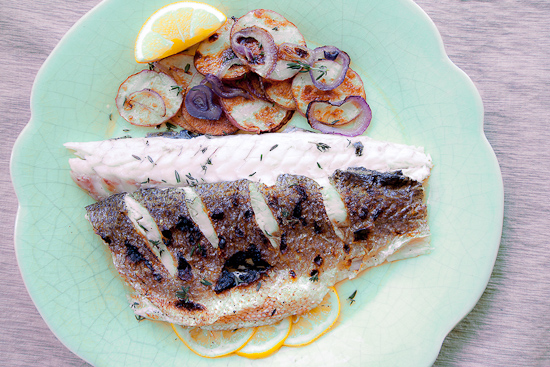 Eating a whole fish on your plate is less complicated, as long as you have an empty side plate.  Remove the remainders of the fins and gills, then simply eat the top portion of the fish.  When the spine is exposed, remove it to the side plate, along with any bones from the bottom piece of fish, then eat the bottom half. 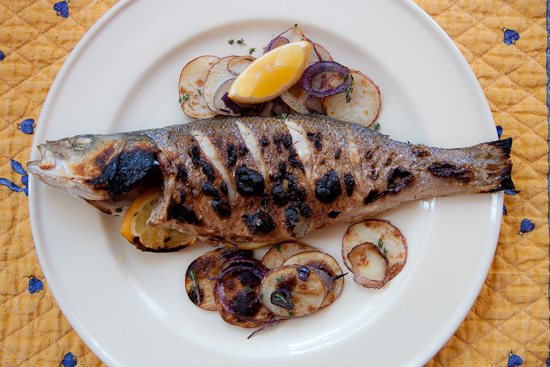 A few weeks ago a famous writer was in our restaurant and was thrilled to discover that we had a whole roasted fish on the menu.  She loved the flavors, which included lemon grass, ginger, cilantro, cumin and chilis, but she was even more excited about the tasty eyeballs.  Now that’s a compliment for a chef and the sign of a committed seafood lover.  We love serving whole fish, but people often ask us to remove the head–they can’t stand having their dinner staring at them.

Roasting fish a little lemon and a few herbs is the perfect recipe for people who get nervous about cooking fish. It’s so easy. And if you don’t want to serve whole fish feel free to use a thick filet. Simply score the skin, season the filet all over with salt and pepper and then rub with oil and cook it skin-side-up until done.

In the summer I’d add tomatoes to the broiled vegetables and perhaps some capers or olives. This is just the beginning. 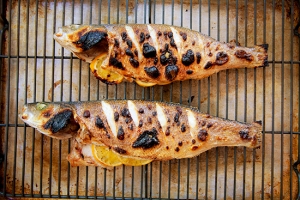