After ten days of culinary heavy lifting we thought it was time to lighten things up and make a meal that takes less than 30 minutes to put together–that’s prep and cooking, 30 minutes.  Allow me to introduce Chicken Curry with Carrots and Ginger.  Recyclable shopping bag to table in 30 minutes.  How, oh how, do we do it? Drum roll, please.

Wait, don’t go.  Still there?  This recipe is perfectly doable without a pressure cooker.  The only difference is the simmering time–40 minutes or so instead of the 12 that it takes in the pc.

In the meantime, if Santa didn’t leave a pressure cooker under the tree, consider buying one.  They’re not cheap–they start at under $100 and climb to three times that for an twelve-quart top of the line Kuhn Rikon model.  On the other hand ours is over 20 years old, I’ve replaced the gasket once, and as far as I can tell will outlive me.  I look at it the same way as I look at buying a good sauté pan, an investment for the long haul.  From time to time you can find one for a fraction of the price at a yard or estate sale.  The saved time will repay you many times over.  They’re safe (in case you were too embarrassed to raise your hand).  Modern cookers come with sealing systems that fail when the pressure climbs too high (i.e. the gasket blows out, steam releases, no explosion).  I suppose you could burn one, but you can burn any pot if you leave it unattended.

Their major advantage is convenience.  This chicken curry cooks less than a quarter of an hour; risotto only minutes longer.  Risotto made from scratch beats risotto made in a pressure cooker, but not by much if you know what you’re doing.  And pc risotto is an excellent choice on a busy night when you’re under the gun, juggling kids or work.  With Christmas dinner leftovers I made goose risotto with preserved lemons and spinach this past week and everyone raved.  We regularly use a pressure cooker for wheat berries, brown rice and whole grains, which I then freeze in two-cup portions.  This week’s curry and the brown rice to accompany it were cooked in the same pressure cooker.  First the rice, while Jody prepped the chicken, carrots and vegetables.  Then the cooked rice came out of the pot to make way for the curry ingredients.  We still beat the clock.

Few culinary tools have origins as interesting and sad as that of the pressure cooker, invented in 1679 by Denis Papin, who died 200 years ago this year.

scattered like so many baubles about the streets of Europe just waiting to be picked up by would be scientists.  Isaac Newton and Gottfried Leibniz, in different countries, were independently inventing calculus; the English alchemist Robert Boyle was establishing the scientific method and helping to lay the foundations of modern chemistry.  Papin worked with both Boyle and Leibniz, and throughout his life experimented with artificial vacuums and pressures.  He designed submarines and at the end of his life, inspired by his pressure cooker, developed the first piston-driven steam engine, which he used to power a paddle boat.

Papin’s 1679 “steam digester,” or pressure cooker, was a six-foot tall device intended to produce vegetable purees for asylums and hospitals.  Difficult to regulate and given to explosions, the machine must have been a frightening addition to institutional kitchens of the day.  Papin himself modulated some of the anxiety by inventing a safety valve which released excess pressure, at least in theory, before the digester could explode.  Despite his election to the Royal Society in 1680, and decades of scientific work in England, Germany and Italy, Papin’s last years were ones of  impoverished exile in London.  Without patrons he had no money; as a Huegenot he was unwelcome in then intolerant France and biographers speculate that he died in 1712, the date of his last letter.

with Carrots and Ginger 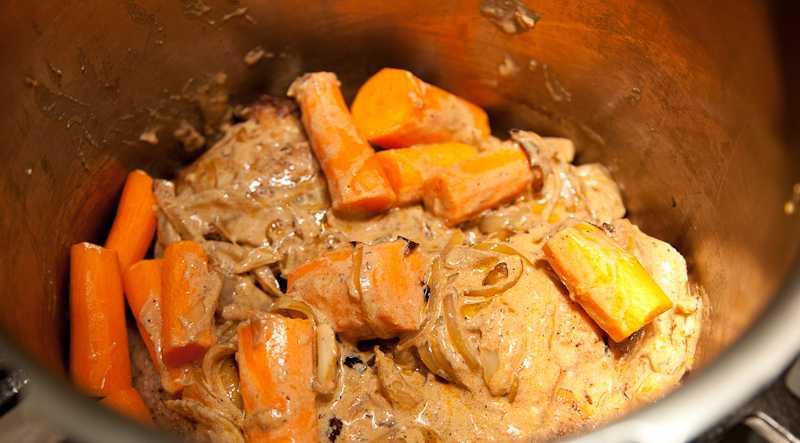 This is my debut with a pressure cooker and the first of a number of pressure cooker recipes we’ll include in The Garum Factory.  I was surprised it didn’t make more noise.  My mother, who worked full time and cooked from scratch every evening, had a very noisy one that, as far as I can remember, she used exclusively for broccoli and cauliflower.  She didn’t have to call us down for dinner because once we heard the insistent hissing of the pressure cooker, we knew it wouldn’t be long before dinner was on the table.  I cooked and cooked through my childhood, but for some reason, probably because I worried it would blow up, I stayed away from the pressure cooker.  It scared me.

Ken, a pressure cooker veteran, walked me through the technique on this one.  I did 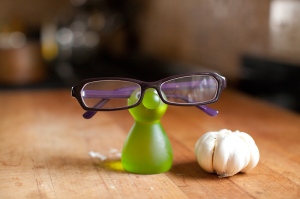 pretty well, although at one point he had to jump in and point out that when the valve on the lid rises higher than the second red ring it’s time to turn the heat down.  The pressure cooker is magical in terms of the time it took to cook this curry, and the texture of the chicken was surprisingly tender.  The carrots did turn to a very soft comfort food texture.  So if this is going to bother you, cook the chicken without the carrots for 7 minutes stop the cooking with the quick release method, add the carrots, and continue cooking for another 5 minutes.

In India, every cook has their own spice blend.  They differ from north to south, from region to region and explanations of the differences are never simple.  Masala means aromatic spice mix and curry gets it’s name from the Kari leaf.  A very simplified explanation for the differences in the mixes we see on supermarket shelves is that, Garam Masala is a northern spice mix dominated by cardemom, cinnamon and cloves whereas in the standard Madras curry powder it is cumin, coriander and tumeric.

I love cooking with spices.  I like to toast and use them whole or grind them when they cool to make my own spice mix, but in the interest of time, since that is the theme of this recipe, I simply called for a ready made spice mix of Garam Masala or curry. powder.