On a post about Labor Day weekend it seems appropriate to step back and give you a glimpse of the people behind the food.  Herewith, a taste of our visit to the Woodbury Shellfish aquaculture grant in Wellfleet.  Barbara and Patrick Woodbury are the sort of people you almost never hear about unless you’re in the food business.  They are local and organic down to the soles of their waders.  On two and half acres of Cape Cod tidal flats they produce hundreds of thousands of the most prized littleneck clams in New England.

First, the basics.  There are three ways to get clams–you can “scratch” them yourself, in designated intertidal areas, armed with a bucket, a clam rake and a shellfish license; you can drag for them in deeper water with a boat and a bottom dragger; or, if you’re dedicated and willing to be outdoors on days when the sun and wind can peel the skin off your face and you have to step around the spears of ice left behind by January low tide, you can raise them.  Oh, and you need 2 – 3 years while they grow from chili flake seedlings to the flattened walnuts of legal size.

Woodbury’s has been wholesaling littlenecks to upscale off-Cape restaurants for almost 25 years.  As someone who has tasted shellfish from the entire coastal perimeter of the U.S.  I think Woodbury clams are about as close to an iconic embodiment of the cold-water quahog as you can get–briny, firm textured, with a distinctive, intense flavor of, well, clams.  They are a bracing wake-up call, a bugle riff announcing the arrival of the Atlantic in your mouth.  They make clams  from Virginia, Florida, the Gulf of Mexico, or other warm-water environments seem slack-jawed and a little slow by comparison.  A Woodbury littleneck is concentrated, with a clear beginning, middle and end, with just a hint of pleasant chewiness.

These qualities have not escaped the notice of connoisseurs.  Were it not for their texture and flavor Wellfleet clams couldn’t compete in the larger world of bivalve aquaculture.   The competition is too big, the margins too small, particularly for New England clam farmers, who tend to be Lilliputian when compared with their warm-water cohorts. Florida littlenecks grow from seedling to legal size in half the time as their Massachusetts peers.  The entire  town of Wellfleet, on Cape Cod, has about 200 acres of coastal flats dedicated to aquaculture, parceled out into grants ranging from 5 acres (generous first grants, established 25 years ago, before anyone knew the business would catch on) to plots as small as an acre.  The acreage of a single clam farm in Virginia may exceed that of all the Wellfleet grants combined.  With that kind of competition, Woodbury’s has to offer something that stands out, a product that clients will purchase at a premium.

We happily accepted the Woodbury’s invitation to meet them on their grant, where along with our friend Steve Nill, we could lend a hand in “plant out,” transferring some 70,000 thumbnail-sized baby clams out of their nursery trays (called “suitcases” by the Woodbury’s) into a full-sized “row,” a 14 by 100 foot bed where they would remain until harvested, 2 or 3 years from now.

We had a great day.  I’ll let the pictures tell the story.

Back at Steve’s house in Barnstable that same evening, we grilled about 5 or 6 dozen clams as described in the recipe.  Then, figuring that lots of people would shy away from opening their own clams before grilling, we tried grilling some whole.  As they popped open I’d lift them off the grill and set them aside to cool before scraping clams and juices into a bowl, to which Jody added fresh pepper and evoo.

I brought the bowl into the house–people were already digging into the sheet pan of grilled clams on the half-shell–and cut a large round of  country style bread into thick slices.  The aroma coming out of the bowl was enough to draw people over.  Whatever reservations anyone had about a collective clam bowl disappeared as everyone grabbed a slice of bread and plunged it into the bowl.  Several dozen clams–and their juices–vanished in about five minutes.  Too fast for me to clean my hands and reach for my camera.

Note: For more pictures of the Woodbury plant-out, go to my flickr account and check out the set, Woodbury Shellfish.

Patrick, Jody and Steve standing on the Woodbury aquaculture grant. 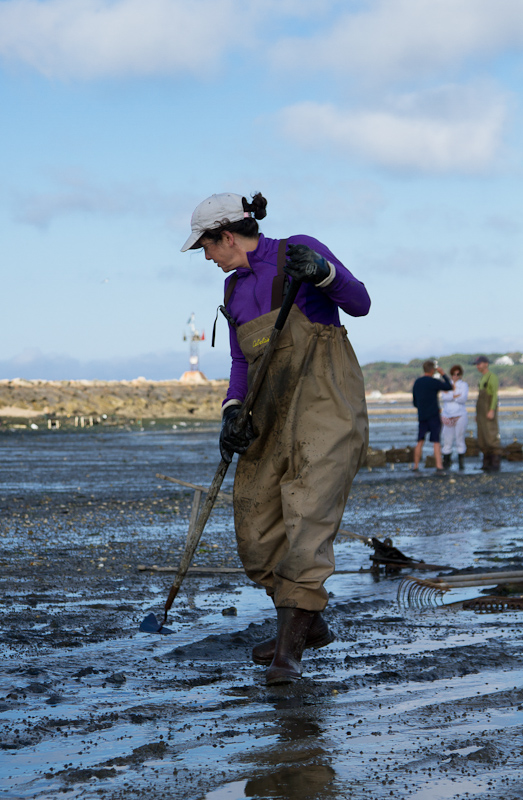 Barbara grooming the "row" to prepare it for the seed clams.

A "suitcase" of baby clams, each as big as a fingernail, several months after entering the water the size of chili flakes. 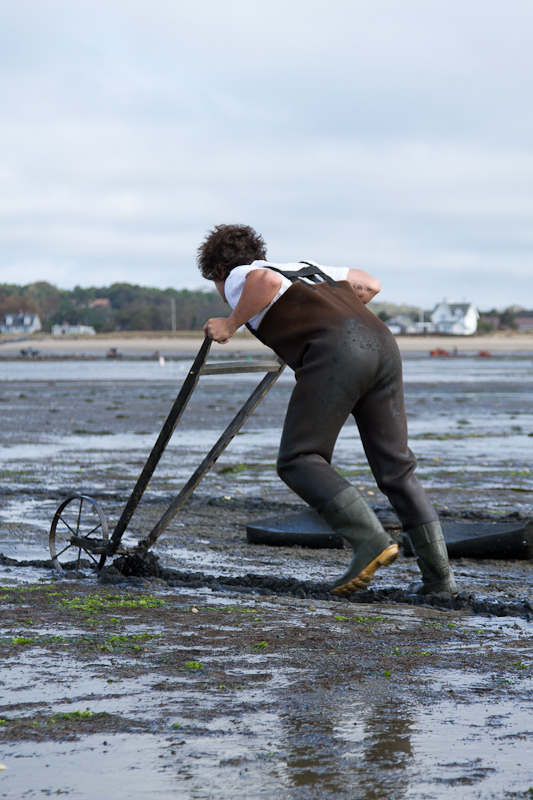 Sam's friend, Taner Bertuna, pushing a harrow to create a trench on each of the long sides of the row. 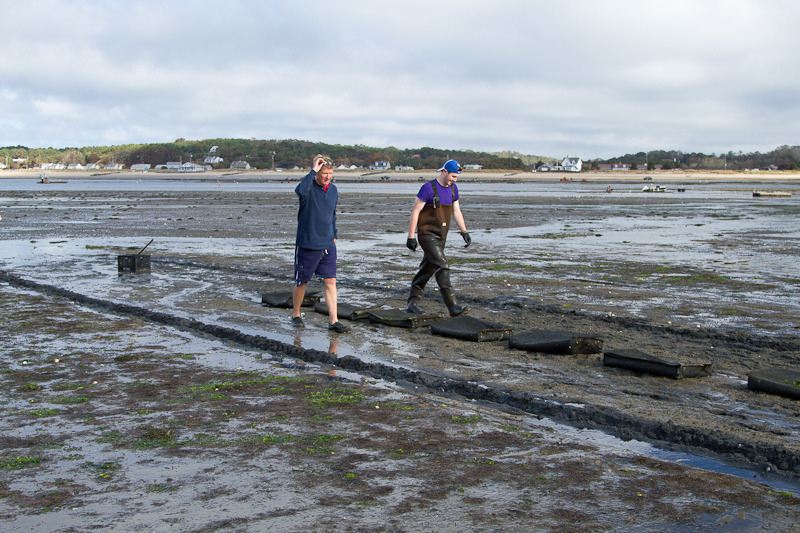 Sam and Steve setting suitcases on the row.

The baby clams will burrow into the mud, but during their vulnerable first year a net will protect them against moon snails, mud crabs, tautogs, and even ducks.

Jody walking the line. Note the cord staked over the edge of the net.

What do you mean, kneel down? 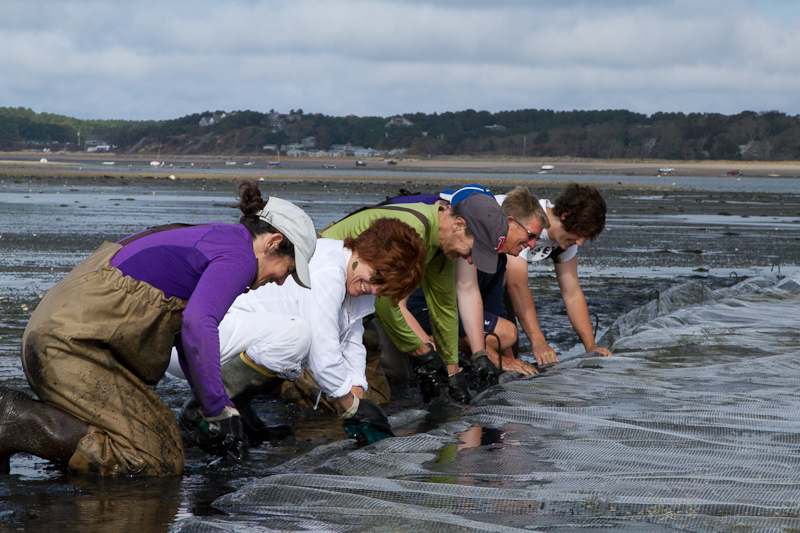 Everyone rolling the net around the cord and staking it down.

We get to take these home, right?

Grilled Clams on the Half-Shell

Position the thin edge of the blade between the edges of the half-shells. 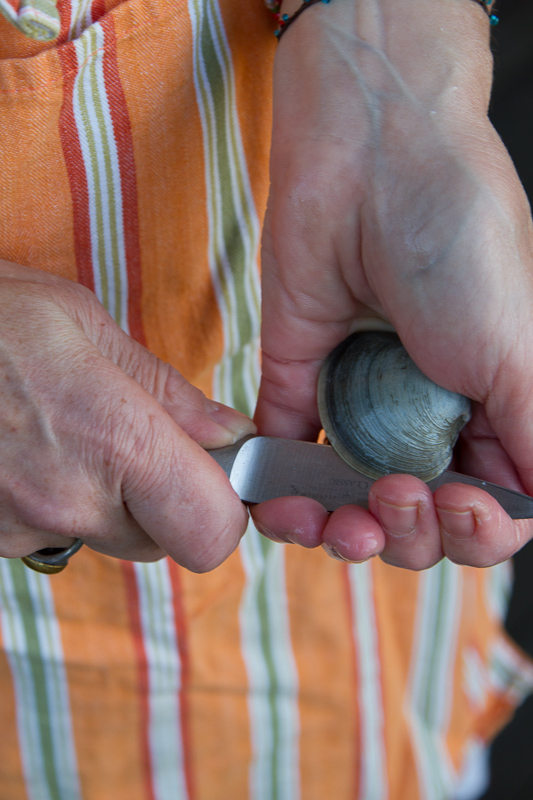 Squeeze, pushing the blade between the shells.

Angle the blade so it scrapes up against the topmost shell, then draw it all the way around the clam, cutting the muscles attaching the clam to the shell.

The shell should now open easily. 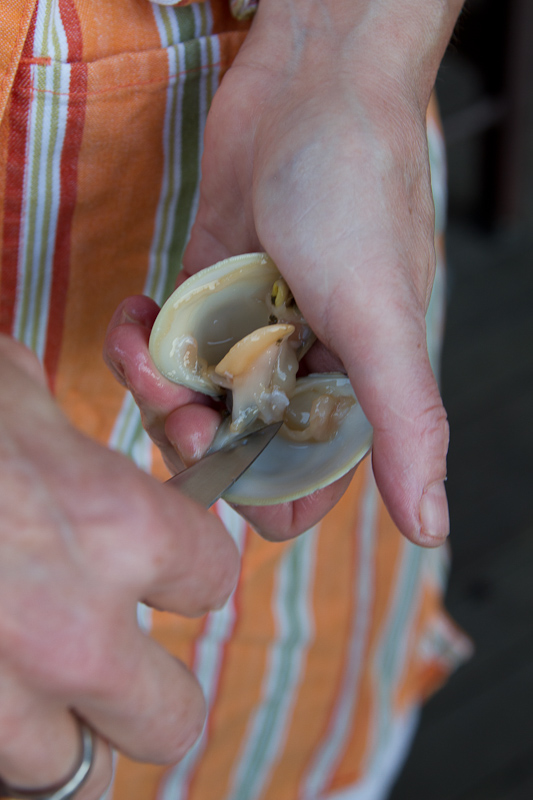 Finish trimming any remaining muscle. You're done. Congratulations! Now pick up another clam...

Try to save as much of the juice as possible. After 40 clams you'll be an expert.

Sheet pan with foil ridges to balance the clams (so they don't spill).

Sprinkle with pepper, drizzle with evoo. 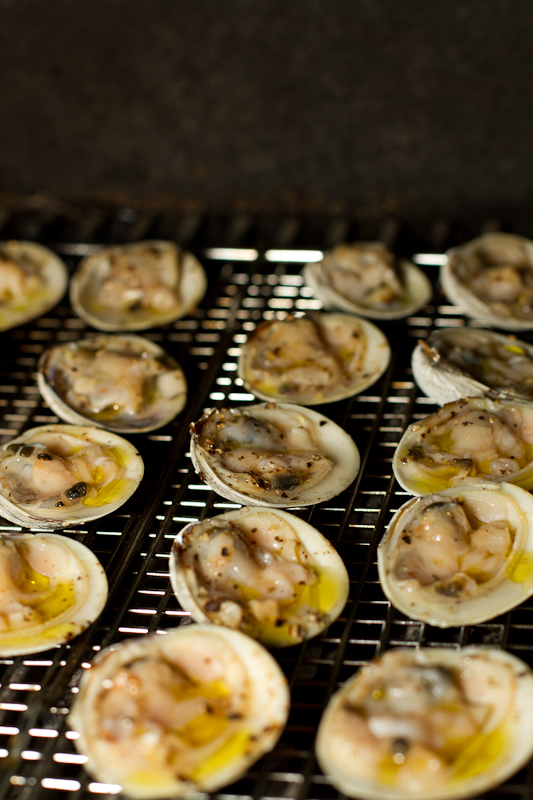 Grill just until the juices and evoo bubble for a minute. You're only cooking the clams until they get a little firm around the edges.

Imagine, for 3 years you’ve been happily lying around in soft muddy sand, washed and fed by in- and out-going tides, and your only job is to grow.  Suddenly, without warning, an aggressive metal hand scratches you out of the sand and into a bucket.

You’ re rinsed, tossed around in the air, bundled up tight in a nylon bag, boxed and then set in a cold dark box to wait until someone wants to take a knife and split you open. You’d hold those two little shells together as tightly as possible too.

So, be sure your clams have rested for several hours after harvesting so they relax a bit.  If they’ve rested a day or so, it will be even easier.

You can open a clam from the front or from the back.  Some shucking pros open them from the back through the hinge that holds the two shells together.  It’s that soft dark line.  You press a blunt clam knife against the hinge until the shells separate.

I was taught to open clams from the front (the rim opposite the hinge) and still prefer this approach, the method described in the recipe.  Leave the attack-the-hinge approach to the pros.

When Ken and I wrote IN THE HANDS OF A CHEF (William Morrow, 2002) I relied on a classic blunt clam knife.  These days I find it easier to use a sharp, thin bladed pairing knife.