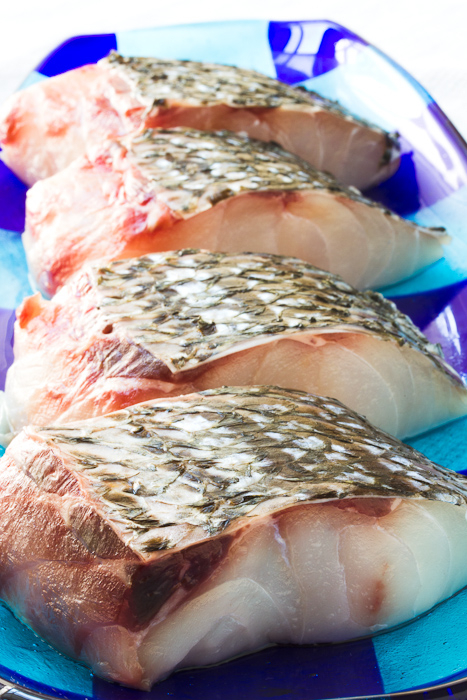 Some years back Jody and I signed on to attend an Oldways conference in Crete.  Before we left people kept taking us aside.  “Greek food, you know about it, right?” Dramatic pause.  “It’s terrible!  Everything is SWIMMING in olive oil.”  Cue pitying gaze.

This is the point where I’m expected to observe that while Greek cuisine does hold olive oil in high regard, the food could hardly be characterized as “swimming” in it.  Except that much of what we ate was, if not exactly backstroking through a pool of evoo, generously coated with it.  Since we focused on traditional domestic cuisine, its ingredients and preparation, we encountered olive oil.

Lots and lots of olive oil.  Morning, noon and night.  Our hotel offered two breakfast buffets.  One was the usual continental mix of cereal, rolls, bad croissants, etc.  The other reflected Cretan tastes–whole milk yogurt (this was before Greek yogurt had become widely available here), fresh fruit, local honey and my favorite, a deep bowl of baby eggplants submerged in olive oil.  Drowning.  Not swimming.

The conference was to commemorate the 50th anniversary of the Rockefeller-funded study of Mediterranean diet after the Second World War.  This study produced the first academic endorsement for what is now common knowledge: Mediterranean diets are good for you, particularly for your heart.  And the epicenter of Mediterranean cardiovascular goodness was Crete.  Cretans, it turned out, not only had the lowest rate of heart disease in Europe, they had one of the highest proportions of fat in their diet, primarily in the form of olive oil.  Cretans consumed more olive oil than anyone else on the planet, almost a liter per person per week.

All of this is by way of alerting you to the healthful benefits of this week’s approach to fish, poaching it in olive oil.  Contrary to what you may think, this is NOT the same as deep frying.  The fish remains juicy and moist without becoming saturated with oil, and you get a tasty side order of all the other good stuff that cooks along with the fish–carrots, lemon slices and garlic.  Because everything cooks at such a low temperature you can refrigerate leftover oil and reuse it for poaching, or in a vinaigrette.  No fishy aftertaste, and for those among you don’t like the day-after smell of a fish fry, little aroma.

If you don’t already own a $5 meat thermometer, buy one, and watch it closely while preparing this dish.  If the oil gets too hot the fish will release its juices and start to dry out.  That’s as tricky as it gets.

We used cilantro and celery leaves to help flavor the oil because that’s what we had on hand.  If you have thyme, or just lemon and garlic, fine.  Tuna, salmon and swordfish all do well this way.  We fought over who got how many lemon slices and carrots–they’re delicious.  Of course, you’ll have to get past the fact that they’re swimming in olive oil. 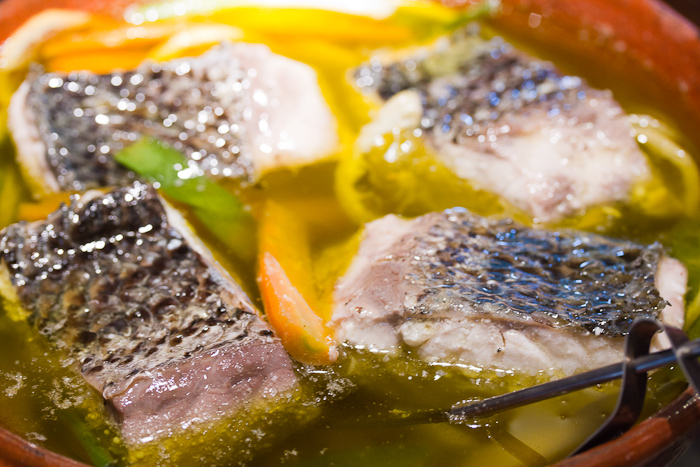 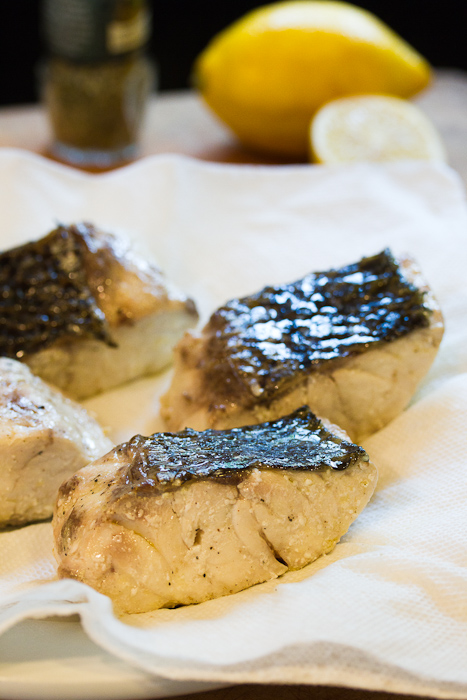 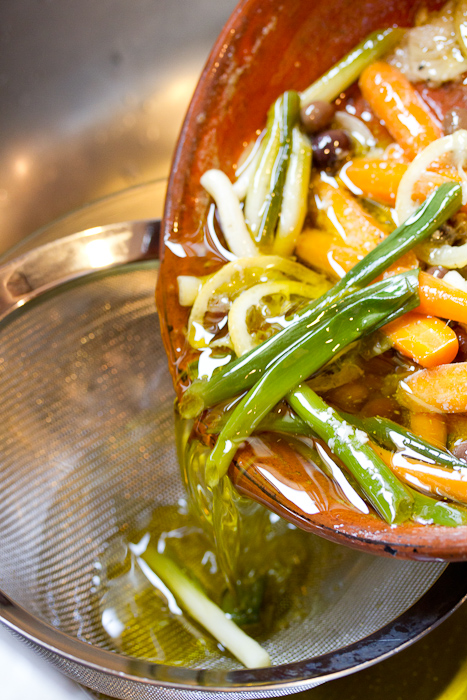 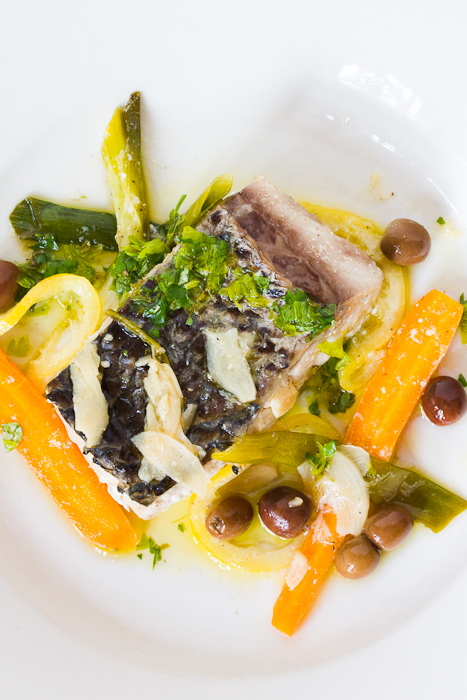 On my first trip to Greece 100 years ago, my future starter-husband and I had plans to island hop and then spend the rest of our lives together.  At one Corfu taverna our host proudly served us zucchini boiled in olive oil, garnished with tiny bush basil leaves, giving each of us a thick piece of bread he sliced from a rustic loaf held beneath his left arm.  I dove in, not looking up until I’d finished all of the zucchini and sopped up all of the oil with my bread.  My response to the dish was visceral: “Wow!  No one ever told me you were allowed to eat this way.  This is my kind of food!”

Then I glanced at my companion.   His panicked glance and the way he poked at the zucchini with the tip of his fork told me all I needed to know.  We’re not supposed to eat this way!  Look at the amount of oil!

We were in trouble.  We were from different culinary planets.

Fast forward 15 years.  Different husband, different trip to the Mediterranean.  Ken and I are in Crete on the Oldways trip mentioned above.  Guess what?  In lecture after lecture we heard the same thing: Olive oil good for you.  You’re supposed to eat this way!

So… don’t be afraid of this recipe.  The olive oil doesn’t saturate the vegetables or the fish.  It provides an insulated bath for them to cook in so most of their flavors stay concentrated.  Save the leftover oil in the fridge and use it to cook other fish, or to make a mayonnaise or a vinaigrette.

As usual, Ken and I fought over how many ingredients I was allowed.  He’s always on the lookout for too many “restauranty” ingredients or techniques.”  I wanted smoked salt–he overruled me.

But I won on the herbs–celery leaves aren’t really an herb, so they don’t count.